Zenon Zogratis 「ゼノン・ゾグラティス Zenon Zoguratisu」[1] is a member of the Spade Kingdom's Dark Triad[2] and the host of the devil Beelzebub.[3][4]

Zenon is a tall man with black, messy hair. His most notable feature is a black, cross-shaped mark on the left side of his forehead and it extends down across his left eye.

Zenon wears a black shirt with a high collar and black pants that tuck into brown boots. Additionally, he wears a dark blue fur coat with a short, light gray fur mantle on top. The back of the mantle is emblazoned with a spade symbol. When using his devil's power, the mantle becomes dark-colored.[5]

When using 55% of his devil's power, Zenon sprouts a pair of slightly curved horns from the top of his head and bat-like wings from his back, and the marking on his face expands. A dark-colored magic covers over half of his body, including the left horn and wing.[6]

After Zenon unleashes 100% of his devil's power, his full body is covered in black, including both horns and wings. Armor created from Bone Magic covers his chest in the form of a ribcage, bony appendages sprout from his back, his shoulders, forearm, hands as well as legs gets covered with bone armor, a helmet-like accessory fashioned from bone covers his left horn as well as half his face, the cross mark expands to the right part of his face and a second set of smaller horns appears on his forehead and he grows a whip-like tail with a trident-shaped tip.[7]

Zenon as a child 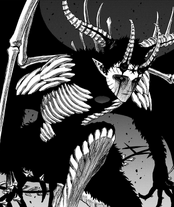 Zenon as a devil

Zenon is extremely merciless. He does not seem to talk much, preferring to settle disputes with his magic power. He believes that emotion and tenacity mean nothing when compared to absolute power and that such weaknesses should be discarded.[8]

A facet of Zenon's personality seems to be his devotion and loyalty for his home kingdom of Spade. He is highly meticulous and determined to acquire more power to add to the Spade Kingdom's war force. He goes as far as invading the Clover Kingdom and directly attacking the Golden Dawn's base for the sole purpose of obtaining an Arcane Stage mage for his kingdom's military.

However, beneath Zenon's typically cold and serious disposition lies a bloodthirsty individual. He coldly insults the defeated and brutalized members of the Golden Dawn and belittles his own subordinates as useless upon their defeats. He later looks down on and grins as he viciously attacks Yuno and that all of his actions are for the sake of the Spade Kingdom's glory.

Unlike Dante and Vanica who love fighting against strong opponents to the point of either prolonging their battle or letting them live to become stronger, Zenon will instead quickly eliminate threats to their plans as he "killed" Yuno Grinberryall who managed to damage him and tried to kill Asta who has Anti Magic.

Zenon was born in the Spade Kingdom as the youngest of four. He is often beat up by other kids due to his unusual Bone Magic. One day, Allen defends him and the two become friends. They both share the dream of achieving the title of Commander in Chief of the Mage Defense Force. They train together for years, and after receiving his grimoire, Zenon tells his eldest brother that he does not want to become a devil host.

Zenon and Allen are eventually recruited into the fourth division of the Mage Defense Force, with Zenon in particular being recognized as a genius mage. When a dungeon emerges in the Spade Kingdom, Zenon and Allen are part of the team sent to investigate it. They find a devil was sealed inside, and it slaughters several of them. Zenon realizes that his strongest spell could defeat the devil if he had an opportunity to successfully use it. While Allen desperately attacks the devil, Zenon rationalizes that the risk is too great to allow the devil to escape, so he takes advantage of the distraction and fires off his spell, piercing both Allen and the devil and killing them. Zenon cries profusely and decides that since emotions and intent are meaningless against absolute power, he will become a devil host after all. With the help of his eldest brother,[9] Zenon forms a contract with Beelzebub.[4]

The Zogratis Siblings stage a coup and kill off the Spade Kingdom's royal family, House Grinberryall.[10][11] Zenon, Dante, and Vanica then take over as the Dark Triad.[12]

Many years later, Zenon is sent alone to attack the Diamond Kingdom. He defeats an army that includes two of the Eight Shining Generals.[13]

Six months later, Zenon attends a meeting with the rest of the Dark Triad.[2]

Zenon and two Dark Disciples, Gaderois Godroc and Foyal Migusteau, travel to the Clover Kingdom and attack the Golden Dawn base in order to abduct Captain William Vangeance, an Arcane Stage mage needed to create the Tree of Qliphoth.[14][15] Zenon confronts William, but Alecdora Sandler steps in to defend the captain. Zenon easily defeats the Magic Knight and expresses his wish to collect William's World Tree Magic for the Spade Kingdom.[16] Zenon captures the captain in a tangle of bones, and the destruction from their fight causes the floor to collapse. After landing on the ground floor, Zenon notes that not all of the Golden Dawns are dead[17] and that Gaderois and Foyal are defeated, meaning 40% is too weak. He attacks the three and easily breaks through Letoile and Klaus's defense.[18]

When Yuno Grinberryall charges at him, Zenon blocks the spirit sword with bones that regenerate faster than they can be eroded. Impressed by Yuno's strength, Zenon demonstrates 55% of his devil's power. He then uses his own bone sword to cut through Yuno's sword and impales the vice-captain.[19] William then breaks free of the bones and fights Zenon long enough to pull his squad members to safety, which Zenon disparages as a distraction for William.[20] Zenon recaptures William and leaves the base.[19]

On his way back to the Spade Kingdom, Zenon senses the magical fluctuations from where Dante is fighting the Black Bulls, and out of concern for his sibling, he creates a portal to the battlefield. There, he ambushes and captures Yami Sukehiro and retrieves the unconscious Dante. When Zenon notices Asta's devil arm, he attempts to capture the young man, but Finral Roulacase redirects the bone. Nearing his limit, Zenon decides to leave Asta behind. The Black Bulls attempt to stop him from taking their captain, but Zenon blocks all of their attacks and leaves through a spatial portal.[21]

Three days later, Zenon checks up on Moris Libardirt's progress in healing Dante's injuries. Moris promises that Dante will be even stronger after the treatment. Zenon then asks for updates on the frozen demon and the Qliphoth Advent Ritual, both of which are going as planned.[22] The Spade Kingdom's Resistance force appear atop a clocktower in the capital's castle town and publicly call out the Zogratis siblings. Zenon, who anticipated the Resistance attempting to interrupt the ritual, has the giant demon unleashed on the town to exterminate people in it. He dismisses the people as too weak to be citizens of the Spade Kingdom. However, Mereoleona Vermillion appears and defends the people from the demon.[23]

Zenon takes his position in the large magic circle for the Qliphoth Advent Ritual, while a squad of Magic Knights infiltrates the castle. When Yuno and Langris Vaude confront Zenon,[24] Zenon asks how Yuno survived their last encounter. Yuno tells him it was due to William and proclaims they will save him. Zenon's bones block Yuno's Tornado Fang, and his Spatial Mana Domination negates Langris Vaude's Archangel Shootdown. Zenon compliments Langris's magic and recognizes that it was intended to counteract his Spatial Magic. However, Zenon dominates the mana in the entire room, negating Langris's Archangel Destruction. Zenon disparages them and William and then proclaims that he will defeat them without having to move. He creates bones all around them, but before they can strike, Yuno merges with Sylph and manages to take control of the nearby mana and disintegrates the bones, which surprises Zenon. Although Zenon's bones stop Yuno's halberd from striking, Yuno throws Zenon's boast back at him before unleashing a spiral of wind that destroys the bones and drills into Zenon's chest.[25] Zenon is forced backward and profusely bleeds.[26]

Afterwards, Zenon unleashes 80% percent of his devil's power and yet is still being overpowered by Yuno. However, as the first gate of the underworld opens, Zenon unleashes 100% of his devil's power[27] and, after healing the damage he sustained, begins to attack Yuno with several whips made of bones, which have even greater regeneration speed and attack power.[28] Zenon then mentions that a demon was sent to destroy the Clover Kingdom[29] and tells them about the two demons from Spade Kingdom legend.[30] However, Yuno is unconcerned as he has faith in Asta.[31]

After continuing to fight, Zenon has grown impatient and prepares to finish off both Yuno and Langris.[32] While Yuno charges a finisher himself, Langris uses Mana Zone to raise an offensive spatial barrier that erases Zenon's incoming attacks. However, Langris lacks an effective counterattack. Eventually Zenon's bones overwhelms Langris's magic and pierce his limbs and sides. Langris refuses to give up and charges at Zenon. As the barrier fades due to Langris's injuries, Zenon notices Yuno's Spirit of Euros spell has completed and is aimed at him.[33] The arrow punches a hole clean through Zenon's sternum. Shocked by the arrow's speed and power, he collapses to the floor[34] and, after reminiscing about his past, offers to make deal with his devil.[4] Zenon requests a devil's heart in exchange for his body and soul, which Beelzebub accepts, effectively turning Zenon into a devil. Zenon's greatly improved magic power allows him to easily overwhelm Yuno, and he criticizes the vice-captain for not being willing to sacrifice Langris in order to kill Zenon with the arrow. With Yuno defeated, Zenon turns his attacks to Langris who has stood back up, but the attacks miss thanks to Finral, who arrives and warps himself and Langris out of the way. Zenon traps them in a smaller spatial cube and attempts to skewer them with bones, but Langris's Mana Zone enables Finral to warp them both behind Zenon. The brothers then prepare to continue fighting Zenon together.[35] 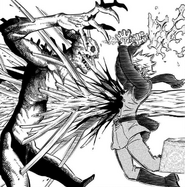 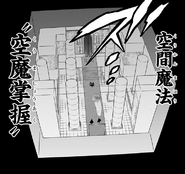 After a making a new bargain with Beelzebub, Zenon obtains the heart of a devil, effectively turning him into a devil. His magic power also becomes more devil-like.[49]