Zenon is a tall man with black, messy hair. His most notable feature is a cross-shaped mark on the left side of his forehead and it extends down across his left eye.

Zenon wears a black shirt with a high collar and dark-colored pants that tuck into light-colored boots. Additionally, he wears a black fur coat with a short, light gray fur mantle on top. The back of the mantle is emblazoned with a spade symbol. When using his devil's power, the mantle becomes dark-colored.[3]

When using 55% of his devil's power, Zenon sprouts a pair of slightly curved horns from the top of his head and bat-like wings from his back, and the marking on his face expands. A dark-colored magic covers over half of his body, including the left horn and wing.[4]

Zenon is extremely merciless. He does not seem to talk much, preferring to settle things with his magic.

A facet of Zenon's personality seems to be his devotion and loyalty for his home kingdom of Spade. He is highly meticulous and determined to acquire more power to add to the Spade Kingdom's war force. He goes as far as invading the Clover Kingdom and directly attacking the Golden Dawn's base for the sole purpose of obtaining an Arcane Stage mage for his kingdom's military.

However beneath Zenon's typically cold and serious disposition, lies a maniacal, arrogant and bloodthirsty individual, as seen where he coldly insulted the defeat and brutalized members of the Golden Dawn, belittled and insulted and deemed his own subordinates as "weak" upon their defeats and later arrogantly looked down on Yuno as he viciously attacked him with a crazed bloodthirsty grin as he revealed his devil's power as he maniacally laughed that all of his actions was for the sake of the Spade Kingdom's glory.

The Zogratis siblings stage a coup and kill off the Spade Kingdom's royal family, House Grinberryall.[5][6] Zenon, Dante, and Vanica then take over as the Dark Triad.[7]

Many years later, Zenon is sent by himself to attack the Diamond Kingdom. He defeats an army that includes two of the Eight Shining Generals.[8]

Six months later, Zenon attends a meeting with the rest of the Dark Triad.[2]

Zenon and two Dark Disciples travel to the Clover Kingdom and attack the Golden Dawn base in search of an Arcane Stage mage.[9] Zenon confronts William Vangeance, but Alecdora Sandler steps in to defend the captain. Zenon easily defeats the Magic Knight and expresses his wish to collect William's World Tree Magic for the Spade Kingdom.[10] Zenon captures the captain in a tangle of bones, and the destruction from their fight causes the floor to collapse. After landing on the ground floor, Zenon notes that not all of the Golden Dawns are dead[11] and that Gaderois and Foyal are defeated, meaning 40% is too weak. He attacks the three and easily breaks through Letoile and Klaus's defense.[12]

When Yuno charges at him, Zenon blocks the spirit sword with bones that regenerate faster than they can be eroded. Impressed by Yuno's strength, Zenon demonstrates 55% of his devil's power and uses his own bone sword to cut through Yuno's sword. Zenon then leaves the base with Yuno dying and impaled by the bone sword.[13] 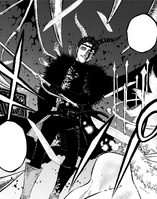 Retrieved from "https://blackclover.fandom.com/wiki/Zenon?oldid=63311"
Community content is available under CC-BY-SA unless otherwise noted.