Zarick 「ザリック Zarikku」[1] is a rogue mage and a member of the Eye of the Midnight Sun.[2]

Zarick is shown to be ruthless in battle.

Zarick infiltrates the Seabed Temple with Vetto and other members of the Eye of the Midnight Sun.[3] The mages spread out,[4] and Zarick encounters Gauche Adlai. After overpowering the Black Bull's Mirror Magic and destroying a Real Double, Zarick pursues Gauche and knocks him down. However, another Gauche appears behind Zarick and hits him with Large Reflect Ray, knocking him unconscious.[5]

Charmy Pappitson binds Zarick and the other captives in cotton[6] and carries them to the Magic Knights Headquarters, where they are interrogated.[7]

Months later, after Patolli places the last magic stone in the sephirot, the Eye of the Midnight Sun members are all sacrificed. Their bodies burn up as their mana and souls are extracted.[8] 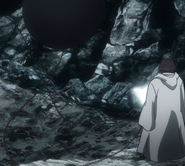 Heavy Chain
Add a photo to this gallery

Zarick's grimoire
Add a photo to this gallery

Retrieved from "https://blackclover.fandom.com/wiki/Zarick?oldid=81444"
Community content is available under CC-BY-SA unless otherwise noted.