Zagred 「ザグレド Zaguredo」 is a high-ranking devil[1] and the mastermind behind the creation of Licht's five-leaf clover grimoire, the massacre of the Elf Tribe, and the reincarnation of the elves.[2]

Zagred is a tall humanoid with a pair of black, bat-like wings, black horns, clawed hands, and a long, arrow-tipped tail. His pale skin is mostly covered by a black coating and black lines and wrinkles. His teeth are pointed and black, and his irises are red.

Zagred can open additional mouths all over his body, including on his heart.[3][4]

Without a body, Zagred appears as a dark-colored cloud of gas with eyes and a mouth.[5] 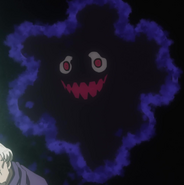 Zagred is a wicked and cruel individual. He looks down on both humans and elves, seeing them as his play things and a means to an end. Yami Sukehiro senses nothing but malicious intent from Zagred's Ki. He is shown to be extremely sadistic as he finds joy in the despair of others, laughing at Patolli. This sadistic side also exposes his arrogance, when he mockingly reveals everything to Patolli and the first Magic Emperor as he believes neither could anything to defeat or stop him.

Zagred's actions come from a deep desire for a body just so he can properly manifest himself and unleash chaos wherever he goes. This displays an extremely selfish and ambitious side as Zagred does not care what methods he has to use in order to achieve that goal.

Zagred possesses a Clover Kingdom minister and orchestrates the royals' plot to steal the Elf Tribe's magic. He sets up a trap to keep Prince Lemiel Silvamillion Clover from attending the wedding.[6] While the magic tool is absorbing the elves' magic, Zagred attacks the elves with an imitation of Lemiel's Light Magic so that Licht believes the prince betrayed them.[7] Licht's despair over the massacre and betrayal turns his grimoire into a five-leaf clover. Zagred attempts to take over Licht's body, but Lemiel's arrival rouses Licht. Refusing to surrender his body to the devil, Licht uses the magic stones to transform into a giant demon.[8] Zagred watches with amusement as Lemiel fights and kills Licht.[9]

Afterward, Zagred tries to steal Licht's grimoire, but Secre Swallowtail uses the magic stones to seal him within an Eternal Prison. Before the seal finishes, Zagred summons the magic stones to himself and uses them to suspend the elves' souls and to set them and himself to reincarnate in the future.[10]

Five centuries later, Patolli's soul awakens in the body of William Vangeance. At the same time, Zagred is unsealed from his prison. The devil waits for years as Patolli creates the Eye of the Midnight Sun, gathers the magic stones, and revives the rest of the elves in order to open the Shadow Palace. During the Battle of Clover Castle, Zagred possesses David Swallow, seizing control from the elf Baval.[7] Zagred confronts the three Royal Knights protecting the Vermillion Estate[11] and plays with them by imitating David's Dice Magic. Once the Shadow Palace is opened, Zagred leaves them[12] and flies through the gate.[13]

Once inside, Zagred switches to Ronne's body, leaving David and Baval's body unconscious, and joins Patolli and Rhya in waiting for the arrival of Yuno and the eleventh magic stone.[14] Imitating Ronne's Switching Magic, Zagred manages to steal the stone from Yuno. Rhya grows suspicious of Ronne when he does not hand over the stone, so Zagred blasts a hole in Rhya's abdomen.[15]

While Patolli is preoccupied with healing Rhya, Zagred places the stone in the pedestal and summons his original body from the underworld. He then reveals the truth about the massacre and the elves' reincarnation, but Patolli refuses to believe it and lashes out with swords of light. Zagred sends the attack back, and Yuno pulls Patolli and Rhya out of harm's way. Yuno tries attacking Zagred himself, but the devil effortlessly blocks the attack and boasts about his Kotodama Magic.[16]

Zagred chooses to ignore Asta and Mimosa Vermillion when they drop into the chamber. Instead, he summons Patolli to him and begins torturing the elf. Yuno and Asta try to interfere, but Zagred summons a storm of swords to distract the pair and then calls down a wall to smash them into the floor. Zagred returns his attention to Patolli and forces the elf to face the truth that Patolli was following the devil's plan, not Licht's. Zagred laughs at Patolli's anguish.[17] Refusing to give up, Yuno and Asta stand back up and attack Zagred together, cracking the devil's arm.[18] Zagred heals his arm and compliments the boys for injuring him. Zagred does not recognize Asta's devil but offers to let it keep Asta's grimoire.

While he waits for Patolli's grimoire to be corrupted into a five-leaf clover, Zagred reveals his plan to take the grimoire to the living world and unleash his true power and form. The devil grabs the grimoire, and when Asta and Yuno try to stop him, he releases Patolli who has become a dark elf. Zagred flies away toward the palace's exit while the boys are busy fighting Patolli.[19]

Zagred reaches the topmost chamber and is confronted by Licht. The two exchange spells until Zagred creates bindings that restrain Licht and his sword. The devil throws a large spear at the bound elf, but Charla manages to redirect the spear to miss and Yami Sukehiro cuts the bindings. Zagred renews his attacks and, after Yami cuts off the devil's arm and wing, compliments Yami and Charla's coordination.[20] They continue fighting, and when Zagred dodges one of Yami's attacks, Licht absorbs and releases the attack and manages to sever the devil's tail. Zagred then uses the grimoire to summon a flood of magic from the underworld.[21] The magic eats other magic and lifeforce, and Zagred directs it to flood down and swallow everyone in the Shadow Palace.[22]

Asta, Yuno, and Patolli reach the chamber, and Zagred is impressed that they reversed the dark elf transformation. Suddenly Lemiel and Secre crash into the chamber and confront the devil.[23] Zagred mocks Lemiel and Licht's reunion[24] and attacks them, but the pair are able destroy the devil's magic due to them being tainted by magic from the underworld. They attack him directly and he is almost overwhelmed by their quick teamwork. Zagred creates a trident that shatters Lemiel's light sword and severs the prince's left arm. Before the devil can kill Lemiel, Asta is thrown and blocks the trident with Anti Magic.[25] Zagred forces Asta back and summons a storm of swords to distract the boy.[26]

Zagred taunts the others for their weak magic, so Licht draws on the power of the other elves and hits the devil with the collected power. Zagred's body disintegrates and his portal to underworld is also destroyed. His heart, however, survives and regenerates his body.[27] When Asta draws on more Anti Magic and is pulled toward the devil, Zagred tries to block the attack with his trident, but the Demon-Slayer Sword cuts through it. Zagred decides to show off his superiority to Asta's devil and summons more underworld monsters, which draw Asta away from the devil.[28] Zagred mocks Patolli when the elf manages to use Demon Light Magic against the monsters, but is left speechless when Yuno cuts huge swaths with Spirit of Zephyr.[29]

Asta and Yuno charge toward Zagred, and Yuno uses his new sword to propel Asta forward, catching the devil off guard. Asta's Black Divider pierces the devil's chest but misses his heart because Zagred moved it to the other side. Furious, Zagred opens more mouths on his body to summon multiple portals with various monsters pouring out in an attempt to destroy the entire Shadow Palace.[30] While Asta and Yuno are occupied cutting down those,[31] Zagred summons more powerful giant monsters.[32]

Zagred watches as Yuno flies toward him and cuts apart the monsters, but he loses sight of Asta who hides in the shadows of the monster pieces and attacks from behind the devil. The boys land a pincer hit on Zagred but fail to kill him as Asta's black form reaches its limit. Zagred then grabs hold of both of them and prepares to kill them.[33] Suddenly, Yami's Dark Cloaked Dimension Slash: Equinox bisects the devil. His mouths begin vomiting as he tries to use his magic. Zagred manages to create some iron spears, but Yuno destroys them, giving Secre time to heal Asta. With a giant Black Divider, Asta cleaves Zagred's torso and destroys the heart.[34]

As he disintegrates, Zagred is greeted by Liebe, who mocks him for losing.[35] Zagred's magic, however, does not disappear and continues to swallow up the Shadow Palace.[36]