Yuno Grinberryall 「ユノ・グリンベリオール Yuno Gurinberiōru」[3][4] is an orphan who was left under the care of a church in Hage[5] after the downfall of House Grinberryall, the former royal family of the Spade Kingdom.[6] He wields a four-leaf clover grimoire[7] and is a Magic Knight of the Clover Kingdom's Golden Dawn[8][9] and Royal Knights squads.[10] He is later promoted to vice-captain of the Golden Dawn.[11]

Sylph, the spirit of wind, chooses to serve Yuno after he finds her scroll in a dungeon.[12] He is also the human vessel for the reincarnated spirit of Licht and Tetia's son.[13]

Yuno is a young man of average height with a lean build, gold eyes, and messy black hair. His main outfit consists of a pitch-black shirt with a high collar and long sleeves. The sleeves have brown leather that cover the wrists and upper arms. He wears light brown pants that are cut below his knees and, around his waist, a pair of brown belts that cross each other. Additionally, he wears a pair of dark-colored socks and a pair of boots. He carries his grimoire in a pouch strapped at his right-hand side of his waist. Later on, Yuno starts wearing the squad's signature robes.

When combined with Sylph, Yuno's left arm turns green, a green circle of connected crosses appear around his wrist, a green wing appears from the left side of his back, and a green half-crown of connected crosses appears on the left side of his head. As he draws on more spirit magic, the entire left half of Yuno's body and hair turns green as he becomes covered in a greater amount of spirit magic.

While possessed by an elf spirit, a red tattoo appears on Yuno's left cheek and his ears become pointed.[16] 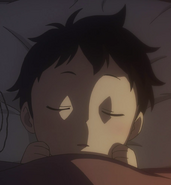 Yuno as a 6-year-old 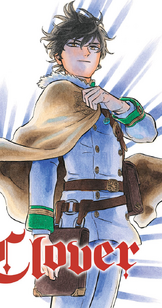 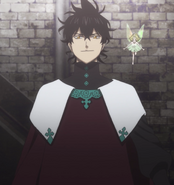 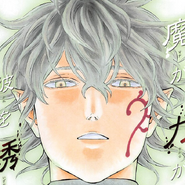 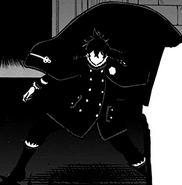 Yuno has a calm and emotionless demeanor and speaks only when he really needs to convey his thoughts. His manner of speaking often makes people misinterpret what he means.[17][18] Despite his detached nature, Yuno harbors a strong ambition to be the Magic Emperor, which he developed while growing up with Asta.[19] Additionally, Yuno has a sense of rivalry with him so strong that he will go to any length to stop anyone who tries to put Asta in harm's way.[20] He also goes out of his way to make Asta look good in the eyes of others, even to the point of Asta's expense, such as when he attacked Asta with his most powerful magic, knowing Asta would block it. Yuno is also known to be very blunt and not hold back what he thinks.

Because he spent most of his childhood living with Asta, Yuno possesses similar traits as he does. One is his tenacity and will to never give up, both of which he learned from training together with Asta in their early days.[21] Also like Asta, Yuno has proven himself to be both very stubborn and passionate when he it comes to his goals, and is not afraid to stand his ground against anyone who stands against him. Unlike Asta however, Yuno is not so quick to lose his calm composure in battle, which sometimes leads to him showing a more quiet, yet intense nature of himself.

In contrast with his current personality, Yuno used to be more of a crybaby who could not stand up for himself. He started to change after Asta saved him while showing his dream and determination.[22][23] Also in contrast with his personality, Yuno has been shown to be surprisingly protective of the people he views as allies, friends and comrades. This protectiveness however has been misinterpreted by some as arrogance. Yuno has also shown himself to be very considerate and conventional at times, like when he protected Charmy from danger, then afterwards accepted her snack out of both nourishment and kindness. 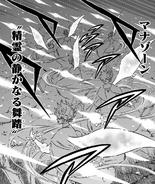 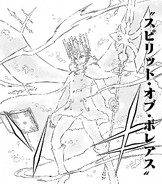 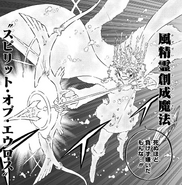 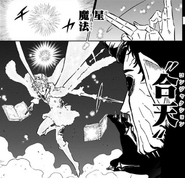 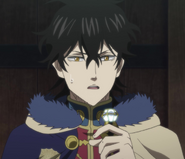 Sylph is one of the four main elemental spirits, who chose Yuno during the battle at the dungeon. She likes Yuno and has a possessive attitude. However, Yuno acts detached from her chatty behavior and usually refuses to respond to her comments, pretending she does not exist whenever she gets frustrated with him. While in battle, Yuno chooses only to speak to Sylph through instructions or simple answers.

When first joining the Golden Dawn, Yuno was immediately looked down upon for being a commoner, with many members stating that him having a four-leaf clover grimoire being a mistake, or simply luck. Despite not being viewed as a worthy member, Yuno carried out his duties anyway, unbothered by the views of his fellow members. In doing so, Yuno continuously worked his way up in the ranks of his squad, eventually becoming vice-captain. Despite their initial views, various members have come to recognize and respect Yuno, and in turn Yuno has become very protective in his role as vice-captain and also came to view them as his family. Yuno was distraught upon seeing his squad-mates being brutally attacked and killed during the attack on their base by the Spade Kingdom. When Yuno realizes that half the Golden dawn are wiped out by Zenon Zogratis, he angrily cries out in frustration over his inability to stop Zenon and protect his fellow members.

As the Captain of the Golden Dawn, William Vangeance was the first in the squad to recognize Yuno's potential. He was very accepting of Yuno and showed a lot of interest in his progress. Yuno in turn, greatly respected William as his captain, yet was very open about his desire to surpass him and become the Magic Emperor. After realizing the leader of the eye of the midnight sun was in fact William possessed by an elf, Yuno voiced his concern to Nozel Silva about killing him, stating that he wanted Asta to free his captain along with the rest of the possessed Magic Knights and that killing him was unnecessary. Months after the battle with the elves ended, it was William that retrieved and returned the Magic Stone necklace to Yuno, which Yuno was very appreciative of. When William was defeated by Zenon Zogratis, Yuno was quick to attack Zenon in retaliation, showing that as his new vice-captain, Yuno's respect and concern for William has grown. During the captain's meeting, Yuno recalls how William was captured by Zenon because he was fighting while protecting his fellow Golden Dawn member. Yuno states that even though he was suspicious of William after the elf incident, he noticed William's efforts to atone for his mistakes and resolves himself to rescue his captain to prove that William made the right decision by choosing to protect the Golden Dawn members rather than devote his full attention to the battle with Zenon.

A senior member of the Golden Dawn and a noble, Klaus Lunettes had previously looks down on Yuno for being a peasant. Yuno often disregards Klaus's attempts at mentorship and instruction in favor of his own solutions to situations, something that causes Klaus grief on a regular basis. After working together to defeat Mars and escape the collapsing dungeon, Yuno and Klaus became friends.

As fellow members of the Golden Dawn, Yuno has been on various missions alongside Mimosa Vermillion. Yuno more or less gets along moderately well with Mimosa and views her as an important teammate and even friend, as he is more than willing to protect her in battle if necessary, as during his and Asta's battle against Licht ended, Yuno used his magic to protect Mimosa from harms way.

Langris is the vice-captain of the Golden Dawn and is therefore Yuno's superior. The two have a commonality of being blessed with powerful magic and being related to someone much less capable than them. However, while Yuno respects Asta, Langris belittles his older brother, Finral Roulacase, a member of the Black Bulls. His affluent upbringing also makes Langris have a low opinion of commoners, which applies to Yuno, and finds his and Asta's open declaration to become the Magic Emperor embarrassing to hear. Because of this, Yuno and Langris act antagonistic towards each other, with Yuno promising to become the next captain of the Golden Dawn to spite Langris, and Langris trying to exercise his superiority over Yuno. However, this is shown to change (although not explicitly) as the former and present vice-captains team up to defeat the Dark Triad.

Alecdora Sandler is a comrade of Yuno in the Golden Dawn. At first, he and Yuno have a rocky relationship, with Sandler's ambitious personality making him jealous of Yuno's natural magic affinity, his successes and how he was able to gain Captain Vangeance's favour so quickly. He also disliked Yuno due to his lowly status. However, after Yuno saved Sandler when they were working together on a mission, their relationship improves. Sandler would later admit that he was envious of Yuno, and now respects him as a dependable comrade. 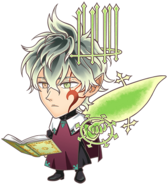 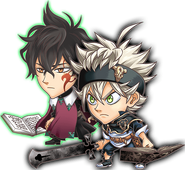 Yuno in Tales of the Rays 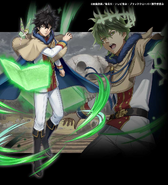