Yami Sukehiro 「ヤミ・スケヒロ Yami Sukehiro」 is a foreigner from the Hino Country[4] and the first captain of the Clover Kingdom's Black Bull squad of the Magic Knights.[5][6] He is also a former member of the Grey Deer squad.[3]

Yami is a tall man with a very muscular build. He has grey eyes and black hair of medium length that is messily combed backward, making it stick outwards. Additionally, he sports a stubble mustache and beard.

As the captain of the Black Bull squad, Yami wears a black banner with the squad's insignia on it. He wears it over his right shoulder and it is attached by two strings to his left shoulder. The banner also has tattered edges, seeming to have been ripped off from a bigger banner. After six months of training, Yami's black banner is now longer to where he now wears it over his right shoulder and under his left arm in a cape-like fashion.

For the Star Awards Festival, Yami wears a simple robe over a fundoshi, and a twisted hachimaki tied in the front. He also carries an uchiwa. The fan and the back of the robe bear the kanji 祭 ("festival"), and the linings of his robe bear the kanji for "raging bull" 「暴れ牛 abare ushi, Viz: "Black Bulls"」.[7]

In Yami's youth, he wore the same thing, but his build was not as muscular as he is now. 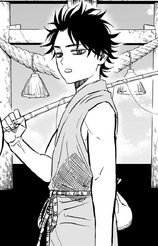 Yami as a Grey Deer 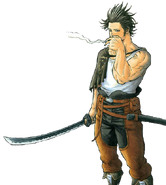 Yami as a Black Bull Captain

He is typically a stoic man who believes more in actions than in words. He is very hot-headed, who can be easily angered by small matters such as being bumped by another person or interrupted when talking.[8] Yami also has a penchant for intimidation whether he uses threatening words or physically harms his target.[9][10] He also tends to immediately go straight for a more physical solution to any problems or confrontations, such as when he destroys a part of the squad's headquarters to calm his subordinates.[11] Despite being very bull-headed, reckless, and unrefined, Yami is an experienced and perceptive warrior, picking apart his opponent's strategies with a glance and is constantly trying to come up with counters for them.

Furthermore, he also prefers instilling tough love to his subordinates by giving them dangerous missions. He believes that it is the best way for them to overcome their limits and grow stronger.[12][13] Yami also does not discriminate people according to their social status or circumstances where he is willing to accept Luck Voltia, Noelle Silva, and Asta to join his ranks, even though he is aware of each of their problems.[13][14][15] His concern for them is likely tied to his own circumstances, being treated as an outcast in his youth like they are. 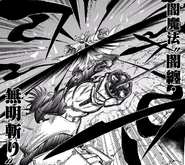 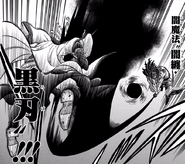 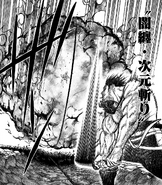 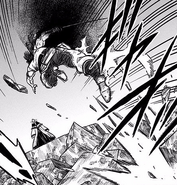 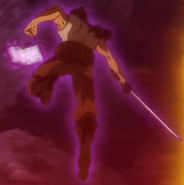 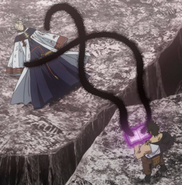 Yami personally recruits Asta into the Black Bulls after he takes an interest in him. He acts as a mentor figure to Asta, coming to his rescue after he is attacked by Patolli and teaching him how to use Ki. He has a lot of faith in Asta's strength, and he has acknowledged Asta as the one responsible for the squad's improved strength and reputation. Yami's faith in Asta has not changed, as he openly stated during his battle with Dante Zogratis that he could not beat him without Asta's help, and asked Asta to get up and join the fight, which he happily did. He even trusts Asta enough to give him his katana to use against Dante, after Asta already used up all three of his Anti Magic swords against him, and was glad when Asta defeated him with that sword.

Yami recruits Noelle Silva into the Black Bulls despite her reputation as a failure of a royal. He has a lot of faith in her strength, and Noelle holds much admiration for Yami in turn, though she is sometimes put off by his gruff behavior.

Yami and Magna Swing share a strong, almost brotherly relationship. Magna is completely loyal to Yami, and Yami in turn will take Magna to go gambling at times.

Yami accidentally frees Vanessa Enoteca from imprisonment in the Witch's Forest, and she later joins the Black Bulls out of respect for him. She appears to have a slight crush on him, but Yami remains oblivious to this.

Despite having very little interaction with Grey, Yami acknowledges her as a member of the Black Bulls. He was more than willing to protect her and Vanessa from Dante Zogratis, stating that he would never let him have one of his people.

Yami recruits Gauche to the Black Bulls despite him being an escaped prisoner at the time. Though Gauche rarely shows it, he holds a lot of respect for Yami and vice versa, though Yami is often put off by Gauche's obsession with his sister.

Luck Voltia holds Yami's strength in a high regard, and is always attempting to challenge him to a battle. Though Yami is sometimes put off by Luck's sociopathic behavior, he still acknowledges and highly regards Luck's battle strength and mana sensory abilities.

Yami has a great amount of confidence in Gordon Agrippa as a member of the Black Bulls. However, like most of the black bulls, Yami sometimes finds Gordon creepy, but does not hate being around him.

Yami puts a considerable amount of trust in Finral Roulacase and his Spatial Magic. Though Yami often threatens Finral due to his cowardly behavior, he actually cares for him quite a bit and has confidence in his recovery after his battle with Langris.

Yami is very fond of Charmy Pappitson, and often enjoys her meals, despite sometimes being annoyed by her appetite. Yami has a surprising amount of faith in Charmy, as he has on more than one occasion given her important jobs to do. One example of this was when he tasks her with holding the prisoners from the Seabed Temple, as well as when he changed his mind about letting Asta go join the fight in the town of Kiten, even with both of his arms broken, only after Charmy volunteered to go with him too.

Yami acknowledges Secre Swallowtail as a member of the Black Bulls and even attacks the Magic Parliament to save her and Asta from being persecuted.

Yami accidentally met Henry Legolant when he found his house in a search for a base for the Black Bulls. Henry told Yami about his condition, and offered to allow Yami to use his home as a base when he dies. Yami was immediately put off by the idea, and instead told him that he would fill the base with plenty of people so Henry would not die, and also recruited him as member of Black Bulls as well. Yami is not that bothered by Henry's magic or the fact that it constantly makes the base's layout change.

Yami met Zora Ideale during one of Zora's missions to take out corrupt Magic Knights, and took an immediate liking to him. Despite openly recruiting Zora into the Black Bulls, Zora initially refused, not taking Yami's words or actions seriously. After hearing Yami out, Zora reluctantly changed his mind, deciding to take the Black Bulls' robe, but chose to not wear it and to continue his mission. After the events of the Royal Knights Selection Exam, he began wearing his robe, and when he saw Yami again during the battle against the elves, he declared himself a member of the Black Bulls, with Yami visibly glad that he finally changed his attitude.

Julius Novachrono is the one who convinced Yami to join the Magic Knights and the first person to show him any kindness since he came to the Clover Kingdom. They both trust each other very much and share a strong friendship, and Yami is heartbroken when Julius dies at Patolli's hands. Notably, Julius is the only person shown thus far who can get Yami to do something without receiving a single complaint in return.

Though Yami has yet to acknowledge Charlotte Roselei's feelings as he has not realized them yet, he holds a lot of respect for her strength and works hard to save her after she is possessed by the elf Charla.

Yami and William Vangeance share a friendly rivalry not dissimilar from the one shared by Asta and Yuno. They both trust each other quite a bit, and Yami does not change his opinion of William even after he sees his disfigured face.

Yami holds a large amount of respect for Fuegoleon Vermillion. When he hears of Fuegoleon's injury, he is confident in Fuegoleon's ability to pull through and recover, and at the same time wants to avenge the defeat during his fight with Patolli.

Yami and Mereoleona Vermillion share a hostile sort of camaraderie. They respect each other's strength, but they often get into altercations when they meet regardless. Uniquely, Mereoleona seems to be the only Magic Knight captain who scares Yami, as he starts shouting to evacuate the base after Mereoleona comes barging in. In comparison, he has recklessly angered people like Nozel and Jack without any form of caution.

Yami and Jack the Ripper are drinking buddies and rivals. The two of them seem to turn every task they do together into a contest, whether it be fighting, drinking, or even selling food. Nevertheless, the two have been shown to work well together in a fight and they both acknowledge each other as worthy opponents.

Yami and Nozel Silva have an intense rivalry. Nozel is disgusted by Yami's unruly behavior, and Yami thinks of Nozel as an annoying pretty boy. However, they still respect each other as fellow captains and powerful fighters. 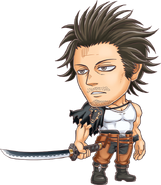 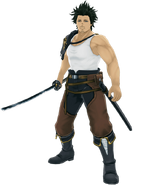 Yami in Tales of the Rays 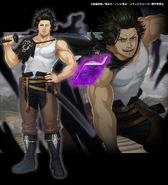