Tabata married an undisclosed person a few months before the serialization for Black Clover began.[1][2] Over the summer of 2019, the couple had their first child, a daughter.[3][4] The family share a dog named Amélie.[5]

In 2011, Tabata entered the Golden Future Cup, which allowed him to publish a one-shot in Weekly Shōnen Jump magazine as part of a competition. He published a one-shot called Hungry Joker and managed to win the aforementioned competition. This resulted in his one-shot being considered for a serialization by the magazine. The serialization for Hungry Joker began in November 2012 at the magazine's 50th issue of the year. The series received various criticisms due to the major departure that the series had taken from the original one-shot. Due to this, Hungry Joker failed to achieve popularity and was cancelled after 24 chapters in May 2013 at the magazine's 24th issue of the year.

A year later, Tabata published a new one-shot in Jump NEXT magazine's 2nd issue of 2014, called Black Clover. The one-shot was once again considered for serialization for Weekly Shōnen Jump and it began serialization in February 2015 at the magazine's 12th issue of the year. For his second serialization, Tabata decided to take a much closer inspiration from the original one-shot where the main characters' design and personalities, along with the fundamental settings, were carried through in the series. As of January 23, 2022, the series has published 320 chapters and is still ongoing for the foreseeable future. 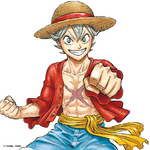 Asta in an advertisement for Jump Music Festa 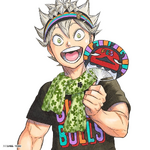