Xerx Lugner 「ザクス・リューグナー Zakusu Ryūgunā」 is the vice-captain of Clover Kingdom's Purple Orca squad of the Magic Knights.[1] Zora Ideale attacks him and steals his identity and place during the Royal Knights Selection Exam.[2]

Xerx is a tall, slender man with long, light purple hair. He wears a silver beaded chain around his head with a small blue pendant hanging at the center of his forehead. After the exam, he begins wearing a dark-colored, furry headband beneath a similar chain and light-colored pendant.

While possessed by an elf spirit, two tattoos appear on Xerx's cheeks and his ears become pointed.[3] 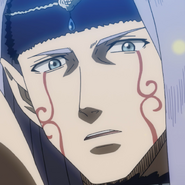 Xerx possessed by an elf

Outwardly Xerx appears virtuous and saintly and will not stand for his squad to be insulted.[4] In truth, he is cold and abusive and a corrupt Magic Knight, as shown when he refuses to release the granddaughter of an old lady and instead offers to end the woman's suffering by killing her.[5]

Xerx is stationed along the Clover Kingdom's border.[6] When he and his subordinate return for the Royal Knights Selection Exam, they are approached by a woman looking for her granddaughter, but Xerx refuses and offers to kill the woman instead.[5] Afterwards they are impeded by Zora Ideale, who witnessed the exchange. The rogue insults the vice-captain, so Xerx attacks Zora with Ice Magic. Zora defeats Xerx and removes his squad robe.[7]

Later at the exam, Xerx is teamed up with Mimosa Vermillion and Asta, but Zora arrives and takes the spot, claiming to be Xerx.[2]

After the exam, Xerx is found still lying unconscious in the city.[8]

Several days later, Xerx is possessed by an elf spirit. Alongside two other possessed Knights, Protobe Collina and Risacca Ondell, Xerx attacks Hecairo and defeats the Magic Knights and citizens there.[9] The Black Bulls arrive in their base and start rescuing citizens. The elves try to stop them but Rouge prevents the attacks from hitting. The base then fires off three cannons, with Magna Swing's Maximum Exploding Fireball hitting Xerx.[10] Combining their magic, the elves plan to destroy the town. Before the spell is complete, Asta is fired from one of the cannons and pins Xerx to the wall with his Demon-Destroyer Sword.[11] After Asta manages to exorcise the elves, Xerx and the two Magic Knights are left lying unconscious on the ground.[12]