Start a Wiki
watch 01:57
'Black Clover' Profile: William Vangeance
Do you like this video?

William Vangeance 「ウィリアム・ヴァンジャンス Wiriamu Vanjansu」[1] is the first captain of the Clover Kingdom's Golden Dawn squad of the Magic Knights.[3] He is said to be the closest person to becoming the next Magic Emperor.[4]

He shares a body with the elf Patolli, leader of the Eye of the Midnight Sun.[5] They are separated after Patolli allows himself to be exorcised[6] and is revived in an artificial body.[7]

William is a 26-year-old man with an average height and a lean build. He has purple eyes and short white hair. William wears a helmet that also functions as a mask that obscures the upper half of his face. The mask is very elaborate, and is made up of a large gold piece covering the area around his right eye, and a smaller blue piece covering the area around his left eye. The helmet has white and red patches of fur on the back edge, and two white feathers that stick up on the left side. The right eye hole has a red border outline, with two lines sticking out on both the top and bottom halves, while the left eye hole has the same design, except white-colored with slightly longer lines. Beneath the mask, William's face features a large scar that stretches from his nose upwards and covers the entire upper half of his face, due to a curse placed on his mother's family.[8][9]

William wears a double-breasted and long-sleeved shirt with a high collar. The shirt itself consists of two different colors, as it is white at the sides and blue in the center. Gold trimmings and buttons can be seen on the blue portion of the front of the shirt. The sleeves are mostly made of white fabric, except for the wrist area where they are made of a yellowish fabric. The shirt extends below William's waist and he wears a dark belt on top of it. He also wears white pants and a pair of high black boots.

William wears the Golden Dawn's signature squad robe, which covers his torso and is gold in color. It has a blue-colored fur around the border of the hood and a pair of red ropes, which come from the left shoulder and connect to the gold-colored button on the right shoulder. Furthermore, at the left-hand side is positioned the squad's insignia. Underneath his robe, William wears a long red cloak that reaches his ankles.

William as a child

William as a young noble 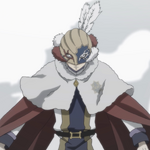 William as a Grey Deer

William as a Golden Dawn Captain

William is beloved by his men and commands extreme loyalty from them. He has a calm, friendly demeanor and nearly always wears an amiable smile when conversing with other people. He still maintains a somewhat mysterious aura due to the fact that most of his expression is covered by his mask.

He is an observant, cautious individual who quickly notices Asta's high athletic ability during the exam, and who also attempts to keep the other captains in check during Gueldre's attempted escape by pointing out that the other man may be under the influence of someone else's magic.

Despite William's difficult childhood and the pain and loneliness he went through, he is not discouraged or enraged by his miserable circumstances and is instead a truly kindhearted individual. This immense kindness is further emphasized with his relationship with the elf, Patolli. Despite them being of different races and Patolli holding immense hatred and anger towards humans, William is not once bothered by it and decides to protect him no matter what due to sensing the young elf's inner sadness and pain, even though he did not really know who or what Patolli was at first.

William was born as the illegitimate child to a noble and viewed as a cursed child due to him being born with a scar that covers half of his face. He is forced to grow up in the Forsaken Realm of the Clover Kingdom, where he is feared by those around him due to his appearance. When William is 8 years old, his father's heir dies so William is brought to live in the Noble Realm. The noble's wife, William's foster mother, loathes the boy's appearance and frequently abuses him.[10] After turning 9 years old, William begins dreaming of Patolli's memories.[11]

After turning 13, William meets Julius Novachrono, who is in awe of William's magic power and offers him a spot in the Magic Knights. William is hesitant because of his appearance, but Julius gives him a mask, which William thinks is tacky but still wears it to this day. Two years later, after receiving his grimoire, William chooses to join Julius's squad, the Grey Deer.[12][13]

On William's 16th birthday, Patolli fully awakens and receives his own grimoire.[14][15] That year, he also meets Yami Sukehiro on the battlefield and they continue to meet until they both someday become captains of new Magic Knights squads.[16][3]

After Alecdora Sandler is ambushed on a mission and left heavily injured, William senses where Alecdora is hidden and rescues him, earning Alecdora's loyalty.[17]

William attends the Magic Knights Entrance Exam that Asta and Yuno participate in. Once the exam starts, he tells the participants that he will take the lead for this test and summons a large tree in the sky to give each of the participants a broom. He then explains how the exam will work and watches as the participants take the test.[18] When it is time for the final test, William informs the participants that they will battle with each other and go all out.[19] During Asta's battle, William notices Asta's speed and wonders if he is using Reinforcement Magic.[20] After the battle, he also takes note of Asta's grimoire.[21]

When the exam is finished, William explains to the participants how they will be selected into a squad. When Yuno steps forward to be selected, all of the captains raise their hands, and William is glad when Yuno chooses the Golden Dawn squad. Afterward, when Asta steps forward, none of the captains raise their hands.[22] After the exam is over, William heads back to the Golden Dawn headquarters.

Days later, William is confronted by Alecdora Sandler as to why he sent Yuno to the dungeon. William replies that Alecdora should trust him and assures Alecdora that Yuno is going to get stronger for them.[23]

William is absent from a War Merits Conferment Ceremony where three of his subordinates are being honored.[24] Later that day, during the attack on the Royal Capital, Fuegoleon Vermillion is teleported into a trap where William is waiting for him. Patolli takes advantage of the Crimson Lion's surprise to cut off Fuegoleon's arm and steal his magic stone.[25][26][27]

Weeks later, William heads to Kiten with thirteen members of his squad to counter the Diamond Kingdom's invasion.[29][30] Atop a nearby roof, William comments on how powerful Yuno is after witnessing Tornado Fang. William then tells Langris Vaude that they are heading out and will make the Diamond Kingdom pay for stepping into the Clover Kingdom.[31]

William spreads roots across the town, using them to absorb mana from the surrounding area. Once he has gathered enough, he creates a massive tree, which ensnares several enemies with its branches and spreads out over Kiten.[32] Angered by the capture of his men, Broccos confronts William, who offers the general an opportunity to retreat safely, but he refuses and is easily defeated. Suddenly Lotus Whomalt appears, surprising the captain, but Yami arrives and defends his fellow. Lotus retreats and takes Broccos with him, and Yami decides to have a chat with William.[33]

Yami compliments William's magic and requests that he remove his mask.[34] William admits that he dislikes doing so, and realizes that Yami suspects that he is Licht. Yami recalls their history together and asks again, and William acquiesces, revealing his scarred face. Yami asks if it is from a battle, but William says that he was born with it and recounts his past. When Yami apologizes for souring the mood, however, William thanks him as he feels better having remembered about meeting Julius, which is a fond memory for him. William is then informed that the Diamond Kingdom forces are retreating, so the captains leave to gather their men.[35]

Weeks later while the Royal Knights squad is attacking the Eye of the Midnight Sun's base, William arranges for Yami to visit the Golden Dawn base for an apology regarding the actions of Langris Vaude, which leaves the Black Bull base with only three members. However, William leaves Yami waiting and travels to the Royal Capital, where he talks to Julius. After thanking the Magic Emperor for everything, William apologizes and transforms into Patolli.[37]

Later that night, Patolli has Asta exorcise him, freeing William, so that William and Licht can stop the still rampaging elves. William creates a gigantic shining tree, through which Asta sends Anti Magic to the elves, exorcising their spirits.[40] After Rades Spirito resurrects Patolli in Licht's artificial body, William catches the unsteady elf and remarks that there is much he wants to say but he must apologize to Julius first.[41] William and Yami travel to where Sol buried Julius's body but the grave is empty. They are greeted by a young Julius, which greatly shocks the two captains.[42] William begins to apologize but Julius interrupts and requests that William help him shoulder the responsibility and backlash from the attack. Crying and saluting, William pledges his grimoire to Julius and the Clover Kingdom again.[43]

William finds Yuno's magic stone among the treasures that Revchi Salik and Gueldre took from the Shadow Palace. William returns the necklace to Yuno.[44]

Six months later, William is confronted by Zenon Zogratis when a group of Spade Kingdom mages attack the Golden Dawn base. Alecdora steps in to defend the captain, but Zenon's Bone Magic pierces through the Sand Magic. William creates a giant ash tree and catches his subordinate, vowing to make Zenon pay for the injuries to his squadmates.[45] However, William is defeated and captured in a tangle of bones.[46]

After Zenon takes William away, the captain's Budding of Yggdrasil activates and heals the injured Golden Dawns, saving the half who were not already dead.[47] 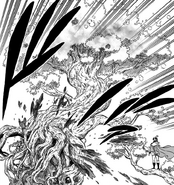 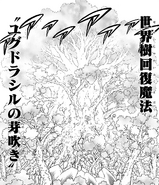 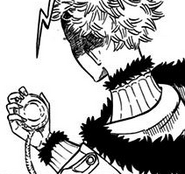 Upon Patolli's awakening and him slowly befriending him, William begins considering and loving him as something akin to a twin brother and supported his goal and dream of reincarnating and reuniting with his fellow elves despite the immense human deaths that would occur because of it.

Retrieved from "https://blackclover.fandom.com/wiki/William_Vangeance?oldid=65390"
Community content is available under CC-BY-SA unless otherwise noted.