Vetto is a tall, very muscular man, with long blond hair and a red tattoo that moves horizontally across his face under his eyes and over the bridge of his nose. He has a rather beast-like appearance befitting his magic. He also has sharp teeth and a blond beard. His normal outfit consists of a short-sleeved vest, light colored pants, and a pair of sandals.

When using his demonic magic, his ears become pointed and a third eye opens on his forehead.[4]

As a child Vetto had short curly hair, smaller eyebrows, and only one sharp tooth. Vetto also did not have the markings on his face or his facial hair.[5]

Vetto as a child 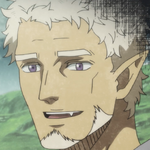 Vetto as an adult centuries ago

A ruthless man and the most eager to battle out of his comrades, Vetto enjoys instilling hopelessness and despair into his opponents[6] and believes that true hopelessness can be instilled when others think there is a chance of winning.[7] Despite all that, he still cares for his comrades, especially Licht, coming to his defense[3] and worrying when his seal is broken.[8]

As a child, Vetto defends a bird being tortured. Licht comes to his aid and gives him hope that one day elves and humans will understand each other.[2] Years later, Vetto and some of the other elves enjoy a meal the day before Licht's marriage to a human woman.[9] After the wedding, the village is massacred by humans.[10][11]

Centuries later, Patri resurrects Vetto into the body of a human and makes him one of the Eye of the Midnight Sun's Third Eye.[12][13]

Years later Vetto, Rhya, and Fana travel to the caves outside of Nairn to protect their leader. Patri asks for his allies' forgiveness, to which Vetto says that he is going to shred them for harming his comrades. Patri introduces the trio as the Third Eye and says that their powers are greater than his. When Finral Roulacase calls their strength a bluff,[14] Vetto proves it by breaking Yami's katana.[6] The Third Eye's stream of attacks force Yami to focus on defending his team, and with the captain overwhelmed, the trio attack simultaneously. However, their attacks are countered by the arrival of three captains.[15] He squares off against Jack the Ripper[16] Like the others Vetto is surprised when Asta makes it through the battlefield unscathed and lands a hit on Patri.[17] Distracted, Vetto is almost hit by Jack's Slash Magic[18] and worries when Patri begins overflowing with magic because Asta's sword removed the seal.[19]

The Third Eye break off from their fights and surround and seal Patri, crystallizing the Light Magic. Afterward Rhya collects Valtos, and the Eye of the Midnight Sun members retreat and warn that they will be back and are always watching.[20]

Days later during the night of a full moon, Vetto defeats 50 Magic Knights by himself in Raque[21] and then heads to the Seabed Temple with some members of the Eye of the Midnight Sun. When Vetto breaks into the temple, he crushes Gio and arrives in front of Luck Voltia and Magna Swing.[22] Gio confronts and asks why Vetto is here, to which Vetto says that they are there for the magic stone and will kill everyone here to get it. Vetto then orders the members he brought along to go and kill everyone here. When Gio attacks, Vetto blocks and counters, easily defeating Gio, and then attacks Luck and Magna too.[23] Vetto then says that he knows that Yami is watching and is going to make Yami feel despair by killing all his comrades.[24]

Vetto then wonders who his next prey is going to be when suddenly Luck and Magna get up ready to continue fighting. Vetto get excited and says that he cannot wait until they succumb to despair.[25] When Luck starts to goad Vetto, Vetto battles Luck and even compliments Luck for being about to keep up with him.[26] When Magna joins in and attacks, Vetto is hit by one of the attacks but quickly catches Luck and throws him at Magna.[27] Vetto continues to battle Luck and Magna and even manages defeat Luck and Magna when they use their Union Magic.

Vetto goes to finish off Luck and Magna, but Asta shows up with Kiato and blocks the attack. Vetto is excited to see Asta and says that he is going to inflict manifold times the pain that Asta had inflicted onto Licht which Asta replies by attacking Vetto with his sword.[28] Vetto comments about the hit and how powerful it was. Asta asks for what they want the magic stones, and Vetto replies that he is not going to tell them and that he will crush Asta like the last two. Vetto then comments about how he plans to kill everyone at the Seabed Temple until he finds the stone. Asta and Kiato charge at Vetto. Vetto battles Asta and Kiato and even manages to push them back. Vetto comments about how weak they are, to which Asta and Kiato reply that they are going to fight serious and charge. Vetto battles Asta and Kiato and easily punches them into a wall.[29]

When Asta gets up, Vetto continues to battle him and even points out Asta's weaknesses. Vetto wounds Asta and holds him by the arm while commenting about how Asta has no chance of winning. When Asta bites his arm and mummers something, Vetto does not understand him. Vetto is suddenly attacked and releases Asta, and Noelle Silva and Kahono tell him what Asta said.[30]

Vetto comments about how he hopes that Noelle and Kahono will entertain him a little. Asta suddenly attacks, but Vetto easily tosses him aside while telling him to get lost.[31] When Kahono wakes up her brother and attacks with him with their Sea God Invocation, Vetto comments about how interesting their magic is. He then easily rips off Kiato's leg, crushes Kahono's throat, and even counters Gifso's Monster Toys. Vetto picks Kahono up by the hair and asks how despair tastes but comments that he does not like the look in her eyes. He decides to rip off her limbs, but Noelle tells him to let go. Vetto says that words will not stop him and just to stay there and watch.[32]

When Noelle suddenly releases her mana, Vetto wonders from where all that mana came.[33] Vetto notices what kind of mana it is and asks if she is part of the royal family, which she confirms. When Noelle says that she is going to make him pay, Vetto tosses Kahono aside and tells Noelle to use her full power for he will redirect it back at her. When Noelle fires Roar of the Sea Dragon, Vetto tries to counter her spell but it easily rips his arm off.[34]

Vetto yells in pain and remembers when he met Licht and a tragic moment in his life. Vetto then reveals that he has a third eye, and thanks them for calling him here. He releases a sinister mana and uses Demon Beast Magic to restore his arm. He then tells Noelle to have a taste of her own medicine and fires a blast powerful enough to break through multiple walls, but Asta steps in front of it and saves Noelle. When Asta says that they have not given up yet, Vetto tells him that they are going to taste true despair from now on.[35]

Vetto gloats about his mana inspiring despair[36] and disputes Asta's claim that the boy can handle him alone. When Asta replies that not giving up is his weapon, not his weakness, Vetto laughs and attacks the fallen Black Bulls and priests, but Vanessa Enoteca pulls them all to safety and restrains Vetto,[37] who easily breaks free of the threads. He then releases a blast of mana, which Finral Roulacase redirects back at Vetto.[38]

Not bothered by their growing numbers, Vetto welcomes the challenge[39] and fires another blast as Asta charges forward. After deflecting the redirected blast, Vetto realizes that he will have to take them on in close combat. He anticipates Asta passing through Finral's portal, but Vanessa saves the boy with her threads, which surprise Vetto. Asta is warped again and appears below Vetto, catching him across the jaw with the Demon-Dweller Sword.[40] Vetto compliments Asta before trying to smash him again.[41] He attempts to heal his jaw, but the effects of the Anti Magic Weapon prevent it. He acknowledges their teamwork and the threat of Vanessa's threads and decides to attack them head on.[42] As the fight progresses, Vetto notices their exhaustion and taunts them, demanding that they fall into despair. Asta ridicules the idea and plunges his sword into Vetto's abdomen.[43]

Vetto screams with pain before grabbing Asta's arms with magic and crushing them. Laughing, Vetto reveals that he let himself be hit, avoiding his vitals, so that he could disarm Asta and force them to feel despair as their hope was crushed. Vetto delights in their despair, but Asta replies that he has not given up yet, which shocks Vetto.[44] After Asta picks up the Demon-Slayer Sword, Vetto demands to know why he will not feel despair, to which he responds that he made a promise which cannot lose to despair. As Asta flies through the air and portals, Vetto realizes that he cannot follow their movements like before and that the sword in him is draining his mana, weakening him. Vetto removes the sword and claims that cannot lose, but Asta points out that Vetto has not won since his opponents never surrendered. With his defense and confidence cracked, Vetto sees Asta as a despair-eating demon, and with a swing of his sword, Asta smashes Vetto into the ground.[45]

Defeated and with his magic gone, Vetto lies on the ground[46] and recalls his history with Licht and the Elf Tribe. Angered that humans stole his hope, Vetto releases a large cloud of mana, planning to self-destruct and destroy the whole Seabed Temple.[47] Yami arrives and, taking over for his squad, slices completely through Vetto and his mana.[48]

Vetto's mana dissipates as his corpse splits apart and falls to the ground.[49] As his squad recovers, Yami covers Vetto's corpse with a sheet and makes a small memorial. Asta lays down some flowers he found and wonders if Vetto was the one in the most despair.[50]

After returning to the Clover Kingdom, Yami hands over Vetto's corpse to Julius Novachrono, who has it autopsied.[51] 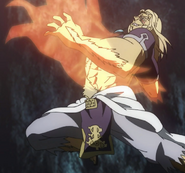 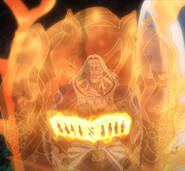 After being forced back to a certain extent, Vetto is able to open a third eye on his forehead and takes on a form that resembles the demon that attacked the Clover Kingdom centuries ago.[69] Using this form vastly increases all of his abilities and grants him access to unique spells and much more malicious magic.[70] 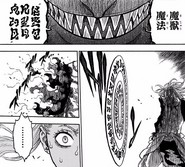 Retrieved from "https://blackclover.fandom.com/wiki/Vetto?oldid=36050"
Community content is available under CC-BY-SA unless otherwise noted.