Vanica Zogratis 「ヴァニカ・ゾグラティス Vanika Zoguratisu」[1] is a member of the Spade Kingdom's Dark Triad[2] and the host of the devil Megicula.[3]

Vanica is a woman with medium-length, black hair. Her most notable feature is an eyepatch that covers her right eye and is emblazoned with a gold spade symbol.

Vanica wears a high-collared, brown vest and matching short skirt. She has a wide, black belt buckled at her waist and hangs her grimoire pouch off of it in the back. She also has a pair of belts forming an X on her chest. A third belt wraps around her skirt. Over this, she wears a dark blue fur coat with a short, white fur mantle on top. She also wears a pair of thigh-high, brown boots and a gold tiara with five spikes and red jewels at the base of each spike.

When using 50% of Megicula's power, Vanica sprouts a pair of curved horns from the top of her head and bat-like wings from her back. A marking expands out from under her eyepatch, and her right canine teeth elongate. A dark-colored magic covers half of her body, including the right horn and wing.[4] When she reaches 70%, more of her body is covered, and a light-colored symbol appears on her chest. She grows a tail and its tip has a similar shape to the symbol on her chest.[5] When she reaches 100%, her whole body is covered in black, with her chest and thighs covered in a lighter shade of black. Her horns become completely black, two additional smaller pointed horns appear on her forehead, her eyepatch is covered in black, blood is flowing in the same shape of her right eye in the same spot, her nails become longer and significantly sharper, the part of her leg under her thigh is donned with a black boot, her waist is covered in a short dress, she grows fangs, a black crown sits on the top of her head and she grows a pair of black wings.[6]

When Megicula takes control of Vanica's body, the hair on Vanica's right lightens in color, her right pupil becomes slit-like, and a black mark appears around her left eye. The mark is a circle with several dots along its length.[7] 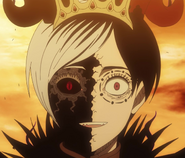 Vanica under Megicula's control
Add a photo to this gallery

Vanica is an enthusiastic individual who enjoys doing flashy things for her own amusement. She hates being bored and is prone to jealousy.[2] She likes to fight people who are in good condition because she believes that it is more fun than fighting weaker opponents.[8] She derides weaker opponents as "trash" and instead desires to battle incredibly powerful opponents, such as Lolopechka, in order to mitigate her sense of boredom. She fully supports Dante Zogratis's plan to create the Tree of Qliphoth, which will summon legions of devils into the world and bring about massive human casualties and catastrophic destruction, because it would weed out the weak from humanity and allow her to fight the strong survivors for her own amusement.[9] Despite her love of fighting strong opponents, she does not always remember the opponents that she had already fought against and defeated in the past right away due to her one track desire to only pursue her present and future pleasures,[10] but her being pushed to her limits again will help jog her memory.[11]

Vanica also possesses the same inhumane demeanor and disposition as her fellow Dark Triad members. Without hesitation, she orders her subordinates to kill and slaughter the citizens of the Heart Kingdom and has them focus their attacks in the densely populated areas of the Kingdom for the sole purpose of further motivating her true target to fight her more seriously.[12] She also takes hostages in order to motivate her desired opponents to grow stronger to fight her for her future entertainment.[13]

Vanica is callous toward and dismissive of her devoted followers. When they express thanks for reviving them, she considers their words to be nonsense and is completely untouched by their immense loyalty and reverence to her. She is willing to hurt and dispose of them to serve her own ends.[14][15]

The Zogratis Siblings attack the Spade Kingdom's king and royal family, House Grinberryall, and take over ruling the country as the Dark Triad.[16][17]

During a fight with Acier Silva, Vanica takes a child hostage, which motivates Acier to become stronger,[18] and manages to curse Acier.[19]

Vanica infiltrates the Heart Kingdom, fights the Spirit Guardians, and curses Princess Lolopechka. She then returns to the Spade Kingdom.[20][21]

Vanica attends a meeting with the rest of the Dark Triad and complains to Dante Zogratis that she was not allowed to do something flashy, like Zenon's attack on the Diamond Kingdom.[2]

Six months later, Vanica and her five Dark Disciples are sent to the Heart Kingdom to defeat Princess Lolopechka and the other mages there.[8] The group infiltrates the kingdom and then splits apart, with each member attacking a separate location.[22]

Vanica and Robero Ringert break into Lolopechka's underground chamber. Vanica expresses her desire to fight the Princess and explains that she attacked the kingdom's citizens so that Lolopechka would be more motivated to fight her. Noelle Silva points out that they have defeated Vanica's Disciples, but Robero, who Mimosa Vermillion defeated seconds ago, stands back up. Vanica demonstrates how the curse she placed on her Disciples will keep resurrecting them, and tells Robero to handle Noelle and Mimosa. After the other Disciples around the kingdom revive, Vanica challenges Lolopechka.[23]

Noelle fires off Sea Dragon's Roar, but Vanica blocks it with her Blood Magic spell, Red Beast, and ridicules Noelle's attack. When Noelle is distracted by Mimosa, Vanica charges forward and has her beast wildly tear at a defensive wall of water.[24] Enjoying the fight with Lolopechka, Vanica reveals that Dante and Zenon are abducting the users of Dark Magic and World Tree Magic but refuses to explain more when Noelle asks.[25] After Lolopechka researches those clues and learns about the Tree of Qliphoth plan, she questions why Vanica wishes to destroy humanity, to which Vanica replies that she wants to fight the strong who survive. Lolopechka then traps Vanica in a column of water and creates around them all a giant body of water, which halves the power of Vanica's Blood Magic, dissolving her Red Beast. The water also boosts Noelle's power, and the Clover royal swims over and drives her lance into Vanica's abdomen. Vanica laughs as blood spills from her mouth.[26]

Vanica draws on 50% of Megicula's power and creates a large clawed hand, with which she slashes at Noelle. As Noelle continues dodging attacks, Vanica steadily increases how much devil's power she is using.[27] When Vanica reaches 70%, her limit, Secre Swallowtail flies into the Ludic Sanctuary and seals Vanica with Eternal Prison.[28] Megicula's Decaying World spell weakens the natural mana arrays, however, and the devil takes control of Vanica's body, destroys the prison and sanctuary, binds Secre, and curses Undine. Vanica complains about Megicula interfering with her fun.

Lolopechka crumples due to pain from her curse and distress over Undine. Seeing this, Vanica loses interest in fighting Lolopechka and prepares to kill her. Noelle tells Vanica to stop and charges at her, but Vanica dismisses her as slow and weak and strikes at her with spikes of blood. Noelle's Valkyrie Dress deflects the spikes from hitting vital spots. Noelle refuses to give up despite their difference in power, which shocks Vanica and Megicula, and drives her lance through Vanica again.[29] Noelle follows it up with a Point-Blank Sea Dragon's Roar, which Vanica destroys with a Red Beast. Vanica calls the attack pointless but then coughs up blood as the spell somehow injured her, much to Vanica's surprise. Remembering her fight with Acier, Vanica decides to take Lolopechka hostage in order to motivate Noelle to become stronger.[30]

Vanica then flies away from the Heart Kingdom and discards her Dark Disciples by detonating their devil power, thus turning them into bombs.[31] Upon returning to the Spade Kingdom, Vanica hands over Lolopechka to Moris Libardirt, who uses his devil-boosted magic to extract Lolopechka's inherited knowledge and transplant into himself.[32] He then gives the Princess back to Vanica, who turns her into a puppet and boosts her power with curse-markings.[33]

Three days later, Vanica takes her position in the large magic circle for the Qliphoth Advent Ritual. A squad of Magic Knights infiltrates the castle, and Rill Boismortier and Charlotte Roselei confront Vanica.[34] Disappointed in Noelle not being the one to fight her, Vanica sends the two Shining Generals under her command to fight Rill and Charlotte and explains that the generals will be tough to fight due to her curses on them and Moris Libardirt's modifications. Unamused, she watches the Magic Knights fight and tells Rill that Charlotte's Briar Magic is holding him back. Vanica wishes that she could have fought Yami Sukehiro and Asta and then turned them into toys. She gloats about how Yami was not that much of a fighter since he got captured. Angered by Vanica's comments, Charlotte uses Blue Rose Paradise to weaken the curses on the Shining Generals. This intrigues Megicula, whose consciousness rises to the surface. Charlotte uses True Briar Magic to knock aside the generals and then combines her blue and red roses to form Queen of Briars, which piques Vanica's interest. Vanica draws on Megicula's power and challenges Charlotte. However, Charlotte refuses to fight her and instead restrains her in a tangle of briars.[35]

After the first gate of the underworld opens, Vanica unleashes 100% of Megicula's power and breaks out of Charlotte's anti-curse briars.[36] She charges at Charlotte while attacking with tendrils of blood, which manage to knock off the captain's helmet. Vanica then asks Charlotte to join her.[37] Vanica attacks with spikes of blood, but the captains evade them, so Vanica pulls out Lolopechka and uses her to fight the two captains, easily overpowering them with the Princess's overwhelming magic power. While Charlotte is swearing to break Lolopechka free from the possession, Vanica impales the captain with spikes from below. Vanica rushes to finish off the captain, but Noelle interrupts. Although Vanica is forced back by the momentum of Noelle's lance, she is pleased to see Noelle.[38]

Red Beast
Add a photo to this gallery 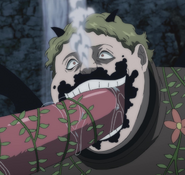 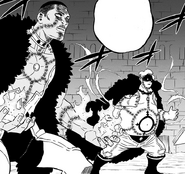 Unnamed power-boosting curse
Add a photo to this gallery 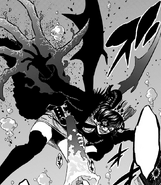 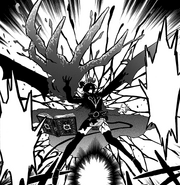 100% power
Add a photo to this gallery

Vanica's grimoire
Add a photo to this gallery

Retrieved from "https://blackclover.fandom.com/wiki/Vanica_Zogratis?oldid=81432"
Community content is available under CC-BY-SA unless otherwise noted.