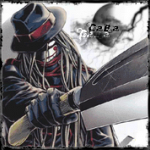 Hi, thanks for the little tip there. It's been a while since my last wiki day that I kind of forget everything I know about japanese. And I know so little from the start... Anyway, what I'm trying to ask is, would you mind being a consultant for everything nihongo-related? Or you already have a lot in your hand right now.

So great to hear that! Thanks. I hope these new series could get their time in the spotlight :)

Hi, if you have some time to spare. Could you double check these names, please? Also does it make sense to you? Thanks :D

Thanks for the help :D

I saw the translation and it was really good. Too bad no scanlation house is picking it up. Regarding the name variation, I think I'm not going to follow either Viz or Shadow-skill to the note because both have a few iffy translation that I'm not agreeing with. Like Viz's Wizard King, that's definitely an ass-pull because the kanji definitely said Magic Emperor and Shadow-skill's Black Sheep's rod, IMO the kanji means Violent Black Cow which I think Black Bull sums it up. Story-wise, I think Shadow-skill is very close.

Hi, Unok. I managed to compel a LIST of all the terms used in the series so far. If you could give it a look, that would be amazing. Many thanks.

Thanks Unok for the info! Must've missed it when I asked my sister to take pictures of the profile. Btw, does it give any information about the spelling of his name? Ddraig - Talk 15:52 6/22/2015

Sweet! Thanks, those look amazing. I've already got a copy of the omakes from Mangahelpers but thank you for the offer. I'll be in touch, in case I need anything else. Thanks, Unok! Ddraig - Talk 17:00 6/22/2015

Those pages actually look awesome. Too bad, Asta got cut off again at the leg :/ To be honest, I'm not very keen on redoing any of those color profile pic that I did. They were just so much work that just remembering the process makes loose the mood to do it... Maybe if Tabata does another CP and it's eligible for profile pic, I might do it because it'll be different. Ddraig - Talk 23:02 6/26/2015

Hi Unok, Do you have access on the assistants page on BC volume 1? I was wondering if you could upload it or you can cut it for me as well because all I want is the image of Tabata's avatar. Also, it would be great if you could provide me with his assistant's names as well. Thanks in advance. Ddraig - Talk 11:00 7/25/2015

Thanks, Unok! Actually what I wanted was the duck picture from the assistants page which is his avatar for toc comments. But I got it anyway so thank you. Btw, did you physically scan all the pages from volume 1? because I was not aware that we could buy the volume digitally.. Ddraig - Talk 15:42 7/25/2015

Hey Unok, long time no talk! Hope you're doing okay. Anyway, thank you so much for the HQ vol. 2 images that you've uploaded. They're great!

Hi Unok, I recently checked the jump website and found that Black Clover has 3 bangaihen published in 3 consecutive Jump Next issue from vol.2 to vol.4. I was wondering if you know which bangaihen is published in which issue. I know the Charmy one is one of them and a bangaihen about the Black Bull on summer vacation is another. Sadly, I can't figure out which Next issue they were published in... Ddraig - Talk 08:42 8/23/2015

Hi Unok, it has been a while since I last heard from you. Are you doing well?

Anyway, I was just wondering if you could provide the images from vol.3, such as the cover and profiles just like from the previous volumes. Hope to hear from you soon.

Hi. I’ve given you admin and bureaucrat rights on this wikia as you requested. You now have the tools you need to clean up, customize and maintain the wikia.

Check out your Admin Dashboard, which can by found by clicking "Admin" on the bottom toolbar -- it has links to all your new tools. Please let me know if you have any questions, and good luck with your new (old) wikia! -- Wendy (talk)  04:40, January 15, 2016 (UTC)

For future reference, are we using images that have the original japanese characters/names over the english ones? I saw that some that I added were incorrect so I want to hold off on doing that. Maybe I post on the character/magic's talk page to get the ok before I add to the main page.

Also, I was thinking about going through the character pages and start filling in the blanks for areas that are empty: appearance, personality, etc. Bazz-Beatz (talk) 16:13, March 7, 2016 (UTC)

hi, I want to do with you to change some terms, instead of elemental magic is magic affinity, it has some kind of magic that the characters have elemental and not as magic mirror, spacial magic and magic time.

would also like to do with you on the category of spells that are not elemental, as creation magic, levitation magic and etc; must have a defined category

Do you have the Extra Chapter 4  image with the dialogues???

Can you send me a link with this, please???

hello, I want to warn you que I am making some changes in criatal magic, this link: http://blackclover.wikia.com/wiki/Nemean_Armor is wrong, this spell and crystal only, it is not one magic creation, I believe it was an error in translation because I see where it was que was crystal magic, and so you look at the image of the kanji, see it has only four letters and the magic creation crystal base has six.

Can you unlock Infobox/Character. I'm trying to make in so that the character infoboxes reflect what squad each character is associate with.

If the offer is still good, I would like to become an admin. With the announcement of an anime, the wiki should get more traffic and will need an active admin. Dragonus Nesha (talk) 20:44, December 28, 2016 (UTC)

Hello and thank you for welcoming me to this wiki. I really enjoy watching the show and reading the latest chapters. I have seen this wiki and I would love to help with anything that needs editing. I look forward to working with you and hope we can make this wiki great.--Tuxedo12 (talk) 19:42, January 19, 2019 (UTC)

So I have been noticing that this wiki only states that there is only one "active" administrator Dragonus Nesha however I have found that he has been misusing his power as an administrator for quite some time. I have been following the wiki's image policy and I have even talked about uploading new event images and replacing old ones with this administrator and was given approval. However, lately he has been deleting the images I have uploaded without any warning even though the images are properly licensed and of higher quality without even asking permission and without waiting the alleged 2 days before deleting. So I am asking if there is something you can do in regards to this matter and if not is there someone we can go to report this matter? Please help I am not the first user to feel like this and I probably won't be the last. There exist evidence in both my talkpage and his.--Tuxedo12 (talk) 20:52, February 2, 2019 (UTC)

yo is gaughe single? i'm making a gaughe x reader fenfiction and i don't want to make it if he's already in a romantic relationshipe with someoneRexgwakagvogoku (talk) 00:35, February 13, 2019 (UTC)rex

Hello. I am a new fan of Black Clover, and I have recently caught up with the manga. I am an active contributor to several other wikis, so I would like to participate here as well. I'm relatively confident in my English proficieny (I'm a native speaker), so I hope to use that for the betterment of this wiki. Before I get started, I would like to ask some questions.

First, I noticed that the article for the Wizard King refers to him as the "Magic Emperor", and he is referred to as such all throughout this wiki. I binged through Black Clover (both anime and manga) in the last few weeks, and have never heard of him referred to as the Magic Emperor. He's always been referred to as the "Wizard King". All of the translations, including both fan translations and official translations (VIZ) use Wizard King, so I assume it's the one most audiences are familiar with. I'm curious, why did you decide to go with Magic Emperor? Also, would you be open to changing it to Wizard King? What would it take to change your mind? Personally, I do feel some dissonance seeing "Magic Emperor", since I've become so accustomed to seeing Wizard King for so many episodes/chapters across many official translations (including the video game), and I'm sure many other fans feel the same.

The next question is regarding the names of the magic knight squads/brigades, and is more of an English question. For the squads, all of their names contain objects/animals. Would it be okay to use the plural form of their names when referring to the squad or its members as a collective? For example, when reffering to Asta's squad, would it be okay to refer to them as the Black Bulls, instead of just the Black Bull? Same applies to the other squads, such as Purple Orcas, Coral Peacocks, Silver Eagles, etc. I find that in terms of English readability and flow, it sounds better to refer to them this way. Instead of saying "the Black Bull is infamous for its destructive behavior", it'd be "the Black Bulls are infamous for their destructive behavior". It's also a pretty normal English convention to refer to the collective members of organizations this way, such as the "New York Yankees", or the "Houston Rockets". It would sound much more natural to an English-speaker's ear to refer to them this way.

Hi, thanks for responding. I guess that's fair. All of the official English material uses Wizard King (such as manga, anime, merchandise, and video games), so it's the one I have grown familiar with over time, so I'd be lying if I said that it didn't feel awkward for me to see "Magic Emperor", since it's an unofficial term. Officiality aside, would you consider changing it to Wizard King on the basis that the Clover Kingdom is a kingdom, and not an empire? I personally feel like the "King" title would be more thematically appropriate than "Emperor" for that reason. It's kinda jarring to see two people holding a "King" and an "Emperor" title in a kingdom.

Also, what is your general stance on official terms vs fan-translated terms? What is the criteria used to decide which one is used, and is there a consistency that you strive for?DeeeFoo (talk) 17:44, February 20, 2019 (UTC)

Hi, thanks for responding. That's fair, I guess I'll just have to get used to seeing the two different terms when switching between official media and the fan wiki. Speaking as a fan, it sure would be nice if everything was consistent, but I can understand if you don't want to change it.

Gotcha, thanks for the clarification. After spending some more time in other communities, I do see that both Wizard King and Magic Emperor are used interchangeably. I guess I'll just have to get used to it. I don't suppose you'd be open to changing it in the future? DeeeFoo (talk) 23:44, February 20, 2019 (UTC)

I would like to affiliate the Dr. Stone Wiki with the Black Clover Wiki.

Can I make "Spirit Magic User's" a catagorey

Retrieved from "https://blackclover.fandom.com/wiki/User_talk:Unok?oldid=59751"
Community content is available under CC-BY-SA unless otherwise noted.