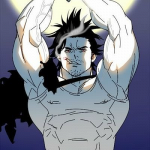 I added Gadjah's because it's clearly meant to be a depiction of his colorscheme. I removed Zenon's because it's not clear if it's a stylistic choice or not. Prior openings and endings have drained characters' colors to emphasize the color of certain things, especially eyes. Previous version of OP 10 has several examples of this.

Zenon's and Dante's eyes have glowed without their fur mantles turning dark. Additionally, the opening has Zenon's mantle turning black and black flecks appearing around him by the time his eye is shown. Dragonus Nesha (talk) 03:15, February 27, 2020 (UTC)

So how is it your decision to say if that his true color scheme or not. Gadjah's color scheme could change slightly when he's finally revealed in the anime. Your logic sometimes isn't fair. In version 3 of op 10 you cleary see Zenon's eyes color being red but your arguement is that it could change. That doesn't make sense. Are you with the producers that make the anime.....NO so how can you come to a decision on your own like that. Like I said your using your admin status to edit how you wanna edit and it shows.(Cman12 (talk) 03:25, February 27, 2020 (UTC))

I was addressing a point you brought up. If you think it doesn't make sense or isn't logical, then that's on you for making the color change argument in the first place. Dragonus Nesha (talk) 17:46, February 27, 2020 (UTC)

This is Black Clover, not Fairy Tail. They operate under different rules. There is no indication that Yami stopped using magic. Dragonus Nesha (talk) 15:00, March 30, 2020 (UTC)

Please, stop making edit wars with yourself, like this. This is a bad habit that you've developed, and it clogs activity feeds and page histories. Instead of changing words and phrases back and forth, take the time to draft fully what you want to say and how you want to say it. Then, use the preview function to double check. Additionally, if you're edit is simply an exchange of synonyms, then save it for a more substantial edit. Dragonus Nesha (talk) 17:02, March 31, 2020 (UTC)

Again, stop edit warring with yourself. Continuing to do so will result in a ban. Slow down and plan out what you want to say before editing pages. Dragonus Nesha (talk) 00:03, May 25, 2020 (UTC)

Retrieved from "https://blackclover.fandom.com/wiki/User_talk:Cman12?oldid=65251"
Community content is available under CC-BY-SA unless otherwise noted.