Undine 「ウンディーネ Undīne」 is the spirit of water who has served the queens and princesses of the Heart Kingdom for generations.[1] She currently serves Princess Lolopechka[2] and temporarily transfers to Noelle Silva.[3]

Undine takes the form of a beautiful woman whose long hair and gown are made of water, fish-like fins in place of ears, blue eyes and pale skin that almost looks blue.

At first glance, Undine is smug and condescending; however, in reality, she is motherly doting who acts very similar to her fellow spirit, Sylph.

Undine forms a contract with the first queen of the newly-formed Heart Kingdom and serves as protector of the kingdom. The spirit is passed down to each generation of queen and princess,[1][4] allowing them to inherit the power and knowledge of the previous generations.[5][6]

Twelve hundred years later, Undine is passed to the infant Lolopechka. Over the next twenty years, Undine raises and teaches the Princess, and the two bond.[7]

Lolopechka and Undine fight Vanica Zogratis of the Spade Kingdom's Dark Triad and the devil Megicula when they infiltrate the Heart Kingdom.[8] As a result, Lolopechka is cursed, which dismays and angers Undine. The Spirit Guardians and Undine keep Lolopechka's curse a secret from the citizens.[9]

Undine and Lolopechka watch as Asta enters the Heart Kingdom.[10] Along his journey, Asta is kidnapped in a ball of water[11] and brought before Undine and the Princess.[12] Undine creates multiple armored knights to attack Asta, but he uses his black form and Black Hurricane to cut through them all. Laughing, Undine traps him in a whirlpool and then tries to drown him by manacling his wrists and staking them to the floor.[13] Secre Swallowtail dives underwater and releases the manacles, and Undine is surprised by Secre's Sealing Magic.[14] Undine shouts when Asta heads toward Lolopechka's room.[15]

Asta's sudden entrance startles Lolopechka, and she accidentally headbutts him. Undine pulls the boy away and comforts the Princess.[16] When Asta mentions that he is searching for information on a devil's curse in the country, Undine reflects that they are unable to talk about it, but Lolopechka blurts out that she has the curse, much to Undine's shock. Undine then reveals that the curse is from Megicula and that they were testing Asta and the others in order to take on Megicula.[17]

Suddenly Lolopechka breaks off from the discussion to handle various tasks around the kingdom. Undine grabs the Princess and dresses her in her formal attire, which causes her to trip and stumble. Undine tells Asta and Secre that the kingdom cannot afford to lose Lolopechka and then reveals that Megicula is in the Spade Kingdom.[18] The group moves to the Princess's Palace and wait for Gadjah and the other visiting Magic Knights to arrive. When Lolopechka introduces herself, she trips over her dress again. Undine lifts the Princess back up and helps her to her throne. Undine then listens as Lolopechka discusses an alliance with the Clover Kingdom.[19]

Lolopechka, along with Undine, trains Noelle Silva, Mimosa Vermillion, and Secre with a focus on the plans and tactics that the Princess developed after facing Vanica and Megicula.[20][21]

Six months later, one of Undine's clones along the border of the Heart Kingdom observes a Candelo moving through the Grand Magic Zone and relays the information to Lolopechka.[22] When the Princess sends the Magic Knights to stop the fortress and to free Tolon, Noelle carries a clone of Undine to the town, and the clone erects a protective barrier around the town. Once the mission is over and the Knights return to the Heart Kingdom, Luck Voltia, Leopold Vermillion, and Asta want to spar with Gadjah. Lolopechka also wishes to join the fight but Undine talks her into joining Noelle and Mimosa for a bath.[23]

At Elmora Lake, Undine watches over the three women as they bathe.[24] Afterwards they return to the Princess's underground chamber.

Lolopechka shouts for Undine when she senses Vanica and her Dark Disciples infiltrating the Heart Kingdom. The Princess creates a map showing the intruders' locations[25] and dispatches the Spirit Guardians and some of the Magic Knights to combat the Dark Disciples and to protect the citizens.[26] Anticipating an attack on the Princess, Undine powers up Mimosa's Magic Cannon Flower so that it can defeat one of the Dark Disciples with a single shot. Vanica follows the Disciple into the underground chamber.[27] During the ensuing fight, Undine defends against Vanica's Red Beast,[28][29] and after Lolopechka discovers the Dark Triad's plan, Undine merges with a large quantity of water to trap Vanica and dilute her Blood Magic.[30]

Secre attempts to seal Vanica, but Megicula's Decaying World spell weakens the arrays, allowing the devil to break free. Undine watches in horror as the devil binds Secre and destroys the Ludic Sanctuary, injuring Noelle, Secre, and Lolopechka. The devil also manages to curse Undine, who collapses and calls out weakly to Lolopechka.[31] The curse temporarily breaks Undine's contract with Lolopechka, so the spirit transfers herself to Noelle.[32] Seeing this, Vanica decides to take Lolopechka as a hostage in order to motivate Noelle to become stronger.[33]

When the Magic Knights visit Dryad in Elysia, Undine reveals that she transferred to Noelle's grimoire and that Spirit Magic users can attain Saint Stage. Noelle questions why Undine did not teach anyone else, and Undine explains that she was protecting Lolopechka since the Princess could not learn offensive spells. Undine regrets this decision, but Noelle argues that being kind and feeling affection cannot be considered mistakes. The two agree to work together to defeat Vanica and rescue Lolopechka.[34]

A few days later, Undine accompanies Noelle to the Spade Kingdom. After confronting Vanica, Noelle assimilates Undine into her armor.[35] While Noelle is fighting Vanica, Undine reminds Noelle that they need to defeat Vanica in under a minute, but Noelle boasts that she will do it in 30 seconds.[36] After Noelle successfully defeats Vanica, Megicula partially manifests from Vanica's body. The devil alters Lolopechka's curse, turning her into a devil, and overpowers Noelle. Undine then separates from Noelle as their Spirit Dive dissolves.[37] Undine grows concerned for Gadjah after Lolopechka stabs him through the abdomen.[38] After Gadjah's Apocalypra Astrauza reveals the location of the devil's heart, Noelle begins creating a Saint Stage sword with which to stab the heart,[39] but Megicula restores its body and curses Undine again, blocking Noelle from any more Saint Stage power.[40]

Once Rill's Twilight of Valhalla revives and strengthens Charlotte, Blue Rose Paradise spreads out again, and the roses remove Undine's curse. She then thanks Asta for stopping Lolopechka's detonation while rescuing the pair from Megicula's reanimated Dark Disciples. Undine merges with Noelle again for a final attack on Megicula.[41] However, their Saint Stage power is limited and they need to conserve it for Megicula. After Rill and Charlotte create spells to take on more of the Disciples, Megicula fuses some of the Disciples into giant soldiers, one of which attacks Noelle. However, Luck in his Lightning Battle Fiend form kicks through it and, with the help of a newly revived Gadjah, clears a path through the Disciples, while also destroying the devil's body and exposing its heart. Before Noelle can stab it, Megicula's magic stops the sword. When the devil tries to counterattack with blood spikes, Nozel protects Noelle with silver shields.[42] Once Nozel has destroyed the devil's body again, Noelle slices the heart into four pieces, defeating Megicula. Immediately after, Undine and Noelle separate.[43]

Undine shrinks in size due to having expended much of her power. She is overjoyed to see the curses disappear from Lolopechka's body.[44] When Gadjah confesses his love for Lolopechka, Undine is conflicted on sharing the Princess with him.[45] 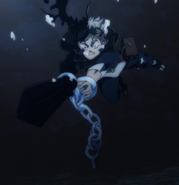 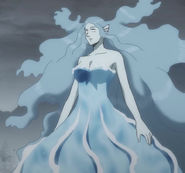 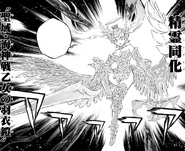