With an open grimoire, the user forms a pair of boots out of lightning. Sparks of electricity can also be seen when the boots are in use. The boots' primary capability is enhancing the user's physical abilities, such as jumping power and speed.[1] The user is able to leap over long distance, and as momentum is built, they are also able to travel on the wall.[2] The boots are useful in hand-to-hand combat as they enhance the user's legs, enabling more powerful kicking moves.[3]

If a boot is caught or trapped by an opponent, the user can remove or split the boot in order to escape.[4]

The boots have a rough surface design rather than a smooth surface. Additionally, the tip of the boots are pointed and the shaft goes up to their knees. The collars are much wider in circumference than the rest of the shaft, and the front seams are lower than the rear seams. The front seams also have a V-shaped design at the center.[1] Furthermore, the user is able to alter the design of the boots, such as adding claws to increase the offensive nature of it.[5]

As the user increases in power and adds pages to their grimoire, the boots also change and improve. The toes are more pointed, the heels have a blade sticking out the back, and the collars have horns that rest on both sides of the knees.[6] 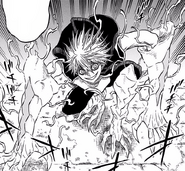