Theresa is an elderly woman with short, light-colored hair. She has a large, jagged scar running down over her left eye, extending from her forehead to her left cheek.

Theresa is a brave old woman with a sharp tongue which is shown in her fights with Gauche. She has shown great care and concern for the children and their well-being, and is willing to risk her life to protect them.

While working in the Royal Court, Theresa serves as Mereoleona and Fuegoleon Vermillion's magic instructor.[3][4] After seeing the deaths of children on the battlefield, she retires from the Magic Knights and becomes a nun so she can protect children.[5]

Sister Lily goes to Theresa's church in Nairn for training and, some time later, tells her about Asta.[6]

When Gauche Adlai is sent to prison, his younger sister, Marie, is placed in Theresa's orphanage.[7]

On Marie's tenth birthday, the young girl is playing with Asta when Theresa arrives to escort her back to the church.[8] That night, the children of the town are kidnapped. Theresa senses mana in the snow and informs Gauche Adlai that Marie and other children have disappeared from the church.[9] She decides to go with Gauche and Asta to rescue the children, and they depart on broomsticks.[10] When they reach the caves, they notice Marco Scarlet lying outside, and Gauche, not wanting to stop for anyone but Marie, drops Asta. Theresa lands to help the two boys. Asta frees Marco from enchantment with his Demon-Slayer Sword, and Theresa heals him with Soothing Holy Light.[11]

Asta and Theresa make their way into the cave and confront Baro. Theresa discovers that the children have had their mana forcibly drained and may never be able to use magic.[12] Theresa watches as the two Magic Knights take on the brothers and is impressed with the Knights' abilities.[13] She stops Asta from punching Baro and asks him to free the other enchanted children, after which she gathers them together and heals them. She yells at Gauche to stop kicking Neige, as they need to find how to reverse the mana drain.[14]

After Sally appears, Theresa finds her mana creepy and asks if she was one of the ones who attacked the castle.[15] Theresa destroys Sticky Salamander with Shining Flame Cross and attacks Sally with Fire Magic, freeing Asta. The nun then reveals that she is a former Magic Knight and teacher of Fuegoleon, and plans to capture Sally for her part in the attempt on Fuegoleon's life.[16] Theresa is taken aback when Sally turns Baro into a giant mud monster. Theresa orders Asta and Gauche to help her defend the children, but Gauche grabs Marie and flies away.[17]

Realizing she cannot handle the giant monster, she creates a leopard to guide the children away from the battle but notes that they will take several minutes.[18] As Asta attacks the monster, Sally tries to capture him again but Theresa destroys the gel. Sally criticizes the woman's declining mana pool, to which Theresa replies that she should not underestimate her elders. However, Theresa recognizes that she is limited by having to protect the children and that they are fighting a losing battle, no thanks to Gauche.[19]

When Gauche returns, Theresa and Asta are exhausted.[20] Theresa is surprised when Gauche says that he will protect someone else.[21] Gauche rudely asks the nun to buy him time, and she replies that she can give him only one minute[22] and is amazed when he multiplies Asta.[23] Asta defeats Sally and the monster with Mirrors Slash, and Theresa relaxes and is impressed with the next generation of Magic Knights. Suddenly she senses Baro and warns Asta, who is saved by Neige.[24]

When Neige and Gauche are struck down, Theresa tries to protect everyone but is struck several times. As she collapses, she says that it is always the powerless, innocent children who are killed, and asks Asta to protect them. However, Licht claims that they were all born guilty in his point of view.[25] Theresa passes out while the children gather around her and Gauche tries to crawl towards her. Finral Roulacase then carries the nun through a portal to Nairn.[26]

Theresa is placed on a bed and a team of mages work on healing her wounds while Gauche demands that she should not die. She wakes and passes her remaining mana to him, knowing that he wants to go save Asta and Yami Sukehiro. She then falls back asleep.[27]

Sometime after the battle, Theresa has awakened and is visited by Gauche. The two bicker but Marie pleads for them to stop. Gauche then thanks the nun, who happily remarks to herself that he has changed.[28]

Months later, after the attack from the elves, Theresa and Neige are concerned for Marie when the Magic Parliament takes her to the Royal Capital. Some time later, Rebecca Scarlet comes running and shows them the newspaper article about Asta's trial.[29]

Six months later, a demon attacks the Clover Kingdom, and Theresa and Marie watch as Asta protects the kingdom.[30] 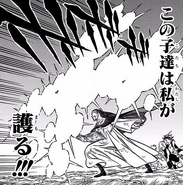 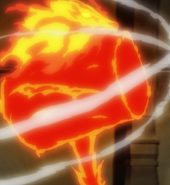 Theresa sees Gauche Adlai as a bad influence on Marie Adlai[40] and limits their interaction.[41] Theresa is happy to see his self-improvement but realizes he still has away to go.[42]

As his mentor, Theresa developed affection for Fuegoleon Vermillion, calling him "Fue-boy" 「フエ坊 Fuebō, Viz: "Fueggy"」. She holds him in high esteem and is proud of how far he has come.[3]