Start a Wiki
watch 01:16
'Black Clover' Profile: Solid Silva
Do you like this video?

Solid Silva 「ソリド・シルヴァ Sorido Shiruva」[1] is the second son of the Clover Kingdom's House Silva, one of its royal families, and a 3rd Class Intermediate Magic Knight of the Silver Eagle squad.[2][3]

Solid is a tall, young man with a slender build. He has long, silver-colored hair and a pair of blue eyes. He sports his hair in a french braid hairstyle but leaves his fringe and the hair at the top section of his head in a loose, messy hairstyle. Additionally, he keeps his hair, on the right-hand side of his head, neat by wearing a couple of blue hairpins in a shape of a cross.

As a nobleman, Solid wears intricate outfits where he sports a dark-colored tunic with a purple blazer over it. The blazer has long sleeves and is held together by a two-headed belt at his waist. The said blazer also extends up to his neck area where it has frilly edges and being held together by a gold locket. He also wears a light-colored pants that extends slightly below his knees and sports a pair of sandals. On top of his outfit, Solid wears a dark-colored robe that covers his entire outfit.

As a member of the Silver Eagle squad, Solid wears the squad's signature robe which only covers his torso. The upper half of the robe consists of a light-colored fur with the squad's insignia at the left-hand side. The lower half consists of a dark-colored fabric that separates the fur and a series of light-colored elongated fabrics that mimic the appearance of a bird's feathers.

Solid is a man with a sadistic nature, finding enjoyment in insulting people he believes to be beneath him. This is not limited to people of lower status but to his own blood relative as well. He does not even hesitate on humiliating his little sister in public.[4][5]

His sadistic nature also extends to his action where he does not hesitate on attacking people who dare to oppose him. Moreover, Solid is not a person that could easily forgive someone. This is noted when he still wants to seriously injure Asta even though another member, Alecdora Sandler, is already restraining him for proper punishment later.[6]

It is also noted by Julius Novachrono that Solid prefers to fight or perform a mission on his own rather than working together within a group.[2] Furthermore, Solid does not seem to be very fond of taking orders from just anyone, which can be seen when he shows a sign of displeasure after Fuegoleon Vermillion gives him and his siblings an order.[7] In contrast to his nature, Solid also knows fear towards people he believes to be superior than him, such as Nozel Silva, his older brother.[8]

Solid was born as the second son of House Silva. As a child, Solid is abusive toward his younger sister, humiliating her and destroying her toys.[5]

One day, Solid is invited to a War Merits Conferment Ceremony at the Magic Knights headquarters, which he attends along with his older siblings. When they are waiting for Julius with several others Knights, the Magic Emperor arrives while bringing 5 lower-ranked Magic Knights along with him to attend the ceremony.[9]

During the ceremony, Solid is promoted to a 3rd class Intermediate Magic Knight after collecting 6 stars from completing missions that were assigned to him.[10][2] At the end of the ceremony, Solid and the other Knights are invited by Julius for a celebratory banquet that he had prepared.[11] After Julius leaves to attend another matter, several Knights begin to scrutinize the unwanted guests that Julius had brought. Solid joins the commotion by greeting his younger sister, Noelle Silva, who is one of the unwanted guests.[4]

Solid's action is followed by his older siblings, with Nozel ultimately ordering Noelle to leave the hall. Subsequently, Solid and the other honorary Knights are confronted by Asta who prevents Noelle from leaving and declares that he will become the Magic Emperor to silence them.[12][13] Seeing Asta's insolent act, Solid immediately launches an attack along with his sister, Nebra, and Alecdora Sandler.[14]

Unfortunately, his attack is nullified but Alecdora manages to restrain him. Solid then immediately proposes that they exterminate Asta as he launches another attack. Once again, Solid's attack fails to harm Asta as the latter deflects it back towards him. Solid manages to neutralize his deflected attack but is completely surprised from the turn of event. He then immediately steps aside when Nozel decides to handle the matter by himself.[15]

Not long after, someone enters the banquet hall and informs them that the Royal Capital has been invaded.[16] After a strategy meeting with the rest of the Knights, Fuegoleon Vermillion orders Solid and his older siblings to protect the Royal Capital's Central District. Solid then summons a water-based eagle and carries his older siblings to their designated location.[17]

Upon arrival, they are immediately greeted with cheers by the citizens, who have been struggling against the invading army.[18] They soon realize that they are under attack by an army of corpses, and Solid proceeds to mercilessly decimate all of them.[19] After all the corpses are defeated, a Spatial Magic spell activates under their feet and transports Solid and the other Magic Knights a considerable distance away from the Royal Capital.[20]

Solid and the rest of the Knights then combine their magical power together to create a composite spell that could transport them back to the Royal Capital. Once they arrive, Solid immediately expresses his discontent in regards to the teamwork that he was forced to perform.[21] Once he sees Fuegoleon is severely defeated by the enemies, Solid begins to mock House Vermillion and the Crimson Lion squad. However, he quickly turns silent when Nozel interrupts him and orders him to help in establishing the Royal Capital's defenses.[22]

After Fuegoleon and Leopold Vermillion are taken to the medical ward and the city's defenses have been recovered, Solid has a brief audience with the Magic Emperor along with his fellow Knights.[23] Soon after, the nobleman follows his brother as the latter leaves the venue.[24]

Solid and Nebra attend the Star Awards Festival and watch the ceremony from a tower, and Solid is aggravated that Silver Eagle ranked below Black Bull.[25]

A week later at the Royal Knights Selection Exam,[26] Solid is placed on Team O with Alecdora and Dmitri Brint.[27] Their first opponents are Noelle, Yuno, and En Ringard, and Solid promises to defeat Noelle himself.[28]

Before their first match, Solid approaches Noelle while she is bickering with Yuno, and criticizes her and her decision to compete.[29] Alecdora questions what Solid is doing, so the Silver Eagle turns and walks away, telling Noelle to run like her life depended on it.[30]

As the match begins, Team O leaves its crystal behind and combine spells to fly across the battlefield, with Solid's water bird being propelled by Sand and Fire Magic. Yuno attacks with Crescent Kamaitachi but the three jump over the spell.[31] When Noelle protects her team with Nest of the Sea Dragon, Solid mocks her for at least learning a defensive spell.[32] After Alecdora forces Team P to split up, he and Solid chase Noelle and Yuno. Noelle then decides to go off on her own, knowing Solid will chase her.[33]

He fires multiple Holy Water Assassination Bullets, which she blocks with Cradle of the Sea Dragon, and mocks her for only using defensive magic. Dmitri yells at Solid for abandoning their plan, but Solid refuses to take orders so Dmitri decides to help take out Noelle.[34] Solid lands between Noelle and the crystal. En summons a Talking Mr. Mushroom on Noelle's shoulder and calls out Solid for being a bad older brother. Solid laughs it off and lashes out with water serpents, destroying the mushroom and cutting Noelle's in multiple spots. When Noelle claims not to be afraid of him anymore, Solid calls her the shame of the family and creates a large water serpent.[35]

His anger quickly turns to terror when faced with Noelle's water dragon. He challenges her to attack, not believing that her spell could hurt him, so she releases her Roar of the Sea Dragon, which destroys his spell and crystal and heavily injures him. Team O loses the match.[36] As a two mages heal him, Solid keeps muttering, "Impossible."[37]

Several days later, Solid is sitting on his bed and talking to Nebra about his loss to Noelle, when a possessed Golden Dawn bursts into the room and threatens them. After Nebra is pierced by a large needle and falls to the floor, Solid prepares to fight until he senses the arrival of the dungeon carrying the other elves.[38] Solid tries to attack the elf, but his magic is too weak to reach her. He is saved by his older brother, who comes crashing through the window. Solid is surprised by Noelle's presence and to see her use a spell despite the elf's oppressive mana. After the elf disrupts the mana in the room, Nozel manages to defend against her attacks, and Solid is distressed by Nozel's injuries. Nozel tells him to remain calm and to stay back.[39] 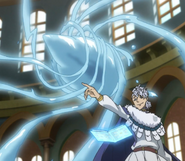 Solid greatly dislikes his younger sister.[43] As children, he would tease her about her weak magic control, slap away her food, and destroy her toys.[5]

Solid seems to be on better terms with his older sister, as the two are frequently seen together.[25][44]

Retrieved from "https://blackclover.fandom.com/wiki/Solid_Silva?oldid=42820"
Community content is available under CC-BY-SA unless otherwise noted.