Sol wears a white tube top that exposes her cleavage and midriff, as well as white arm warmers that cover her elbows. She wears white shorts, along with white detached pants that reach slightly past her knees. The pants feature large slits that reveal her inner thighs, and are connected to her shorts via o-rings. She wears white shoes, as well as a black belt on her waist that holds her grimoire. She wears the Blue Rose robe on top of everything.

Sol as a child 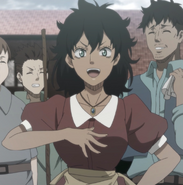 Sol is prominently a misandrist. She believes most men to be incompetent and brutish[3][4][5] and refuses to take orders from them.[6] However, she is willing to put aside her prejudices and work with men if it will help Charlotte Roselei and the Blue Rose squad.[7][8][9]

She particularly likes the Blue Rose squad since it is nearly all women and the men are treated as errand boys.[10] She also will do her best to avoid hurting other women.[11]

In battle, she can be quite brash and sloppy, ignoring some of the subtleties of magic[2][12] and instead charging headlong at an opponent or target.[13][14]

When Sol was a child, Charlotte Roselei saves her from a group of men,[15] and inspired by this example, Sol joins the Blue Rose squad years later.[7]

Sol is invited to a War Merits Conferment Ceremony and attends with her captain.[16] Sol is promoted to 3rd Rank Intermediate Magic Knight for earning six stars.[2] At the end of the ceremony, Sol attends the celebratory banquet that Julius Novachrono had prepared for the guests of the ceremony.[17] Sol finds it amusing when some of the other knights begin fighting, but Charlotte reprimands her for such behavior.[3] Sol laughs again when Asta and Leopold Vermillion rush out to defend the Royal Capital, and this time Charlotte agrees.[4]

Fuegoleon Vermillion orders the Blue Roses to the east, and Sol creates an earthen golem to carry her and Charlotte.[18] Once there, they are surrounded by corpses, which disgust the women, but they resolve to destroy the corpses anyway.[19] Sol creates another large golem to punish the corpses for disgusting her captain.[20]

Once all the corpses are defeated, Valtos teleports the Magic Knight squads to location hundreds of miles from the city.[21] Combining their magic, the Magic Knights quickly return to the city and come to the rescue of Leopold, Asta, and Noelle Silva.[22] After Fuegoleon and Leopold are taken to the medical ward and the city's defenses have been recovered, Sol and the other Knights have a brief audience with the Magic Emperor.[23]

Accompanying Charlotte to the Star Awards Festival, Sol leaves her captain alone while she shops for a dress and returns with one as Charlotte deals with Balman and his men.[24] Asta tries to stop the captain but runs into Sol's chest. Although she recognizes him, calling him short, she casts him aside and forces her captain to put on the new dress, exclaiming how cool Charlotte looks. When others pay Charlotte compliments, the two Blue Roses threaten the crowd.[25] When Yami Sukehiro laughs at Charlotte's outfit, Sol calls him the stinkiest and filthiest man,[26] and when Vanessa Enoteca challenges Charlotte to a drinking contest, Sol accepts for her captain.

As the contest begins, Sol cheers on her captain but panics when Charlotte gets woozy after one drink.[27] Even though it ends in a draw, Sol still praises her captain.[28] The awards ceremony then begins and Sol tries to rouse her captain.[29] When the Blue Rose squad is ranked 4th, Sol points out that they moved up one rank.[30]

After the festival, Sol follows her captain to Ultime-Volcano Mountain Trail,[31] and at the prospect of soaking in a hot spring with Charlotte, Sol undergoes the strenuous training.[32]

Sol reaches the summit before nightfall so she is allowed to soak in the hot springs, and to keep the men from seeing Charlotte's naked body, Sol creates a large earthen wall to bisect the hot spring. After stripping and joining the other women on their side, Sol's nose bleeds as she admires Charlotte's body. Sol then helps Noelle wash her hair and invites her to join the Blue Rose squad. When Charlotte faints, Sol pulls her from the water and fans her body.[33]

At the Royal Knights Selection Exam, Sol yells at Zora Ideale for disrespecting the Magic Emperor.[34] She is then placed on Team C with Magna Swing and Kirsch Vermillion.[35] After Team B defeats Team A, Sol criticizes Magna for being so confident, before Kirsch insults both of them for being lowborn.[36] Sol finds Kirsch's prettiness disgusting, but he suggests that she not use such words and should try to be more beautiful like him, which she finds creepy and frustrating.[37]

As their first match begins, Sol rides across the battlefield atop a golem but is stopped by an opponent's bog. Kirsch's clone appears and suggests that she use her golems more creatively, with which she agrees.[38] Kirsch then covers the field with cherry blossoms and creates tunnels for Sol and Magna leading straight to Team D's crystal, and Sol attacks it with multiple golems. Team C wins and they end in a pose together, with Sol and Magna having fallen into Kirsch's pace.[39] Sol then hides her face in shame.[40]

After Julius has the battlefield rearranged, Team C takes their place for their second match.[41] Sol stands beside Kirsch as he once again covers the battlefield with cherry blossoms.[42] After Asta removes Kirsch's cherry blossoms, Kirsch orders Sol and Magna to guard the crystal while he sets out on his own, which frustrates Sol.[43] Sol secures the crystal within her golem.[44] When Mimosa Vermillion moves across the battlefield on her own,[45] Sol confronts her. Mimosa hits the golem with Magic Cannon Flower, but Sol uses the severed arm to trap Mimosa in Dirt Clod Seal. She then leaves Mimosa behind.[46]

Sol finds and unburies Kirsch and wakes him up with a slap. He accuses her of messing up his face, but she points out that she found him injured. When he broaches the topic of her being a commoner, she reminds him that the Magic Emperor told everyone to overcome their differences, and asks if he could put aside his selfishness, after admitting that she never wanted to help men.[47]

After Asta and Zora defeat Kirsch and Magna, Sol bursts from the ground and has her golem punch Team B's crystal. The punch stops short, and grass sprouts from all over the golem, as Mimosa's Control Magic Grass takes over. Sol repeatedly strikes the golem's head and orders it to obey, but it ignores her and reveals the crystal inside its body. With a swing of his Demon-Dweller Sword, Asta destroys the golem and the crystal, winning the match for Team B.[48]

Afterward, Sol sits on the ground and listens to Zora critique Team C, in which he points out that she is rough and not sensitive to subtleties in magic.[12]

As Asta collapses from exhaustion after defeating Langris Vaude, Magna catches him while Sol and many other Knights take to the field in support of Asta.[49]

Several days later, Sol is at the Blue Rose base when Charlotte Roselei is possessed by an elf spirit. The elf attacks the other Magic Knights before leaving for the Royal Capital. Despite her injuries, Sol chases after Charlotte and catches up to her while she is fighting Yami.[50] The Black Bull asks Sol to take care of his Black Cocoon, but she refuses to take orders from a man and wants to rescue Charlotte herself. When her magic proves too weak to reach her captain, however, she begs Yami to save Charlotte. Yami accepts and tosses her to safety.[51]

Sol rushes off and buries the Black Cocoon containing Julius's corpse. After hearing an explosion[52] and seeing Charlotte leave, Sol returns to Yami's location and finds him buried in rubble. Yami sends her to team up with other Knights and protect the citizens.[53]

Sol later joins a group of Magic Knights led by Yuno. They arrive at Clover Castle and defeat the possessed Golden Dawns.[54] Later that night, after the elves are exorcised, Sol assists in the recovery efforts and uses her magic to unbury trapped citizens.[55]

A few days later, Sol is sitting at Charlotte's bedside while the captain is resting and recovering. Sol allows Yami to enter since he helped save Charlotte. Suddenly, Charlotte yells and runs from the building, much to the shock of Sol and Yami.[56] Charlotte eventually returns to the Blue Rose base and has her squad assemble in the courtyard. She confesses her love for Yami, and Sol is taken aback by the revelation and then by the other squad members' approval. Sol is even more shocked when Yami chooses that time to show up again.[57]

Six months later, Sol helps evacuate citizens to safety when a demon attacks the Clover Kingdom.[58] As she watches Asta fight the demon, Sol is impressed with his growth.[59] 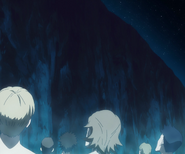 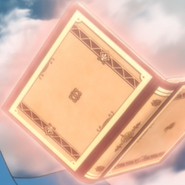 Ever since Charlotte Roselei saved Sol from bandits, Sol has been inspired by Charlotte and looked up to her as a big sister.[7] As such, Sol refers to Charlotte as "sis" 「姐さん nēsan」, despite the captain's repeated corrections.[3] Sol is also overprotective of her captain, often threatening anyone who gets near or looks at the captain.[62][63][9][64]

Sol is crushed when Charlotte seemingly betrays and attacks the other Blue Roses and refuses to acknowledge Sol.[65] Although Sol is willing to give her life to free Charlotte from Charla's control, Yami convinces Sol to stay alive for Charlotte's sake, which Sol agrees to do.[66]

Sol also admires Charlotte's beauty.[67][68] She gets so excited when seeing the captain's naked body that her face flushes and her nose bleeds.[69]