Siren is a large built man with blond hair that is brushed back and braided. He has narrow eyes and no eyebrows.

He wears a double-breasted and long-sleeved shirt with a high collar and red trimmings on the edges. The collar also has a chain connecting both ends of the collar as an ornament. The shirt itself is made of two different colors where it is white at the side and red on the middle. The sleeves are mostly in white fabric, except the wrist area where it is red fabric. The shirt extends below his waist and Siren also wears a light-colored sash on top of it. Furthermore, Siren also wears a casual white pants and a pair of high boots to complement it. The black boots also have fur around the collar.

Siren wears the Golden Dawn's signature squad robe, which covers his torso and is gold in color. The fabric has an intricate design with a similar color palette as the robe. It also has a blue-colored fur around the border of the hood and a pair of blue ropes coming from the left shoulder and connected to the gold-colored button on the right shoulder. The button keeps the robe properly in place. The squad's insignia is positioned at the left-hand side.

While possessed by an elf spirit, a tattoo appears along Siren's jawline and his ears become pointed.[4] 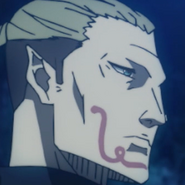 Siren possessed by an elf

Siren is a calm and silent individual who does not talk unless it is necessary.

Siren is present at the Magic Knights Entrance Exam, accompanying the captain of the Golden Dawn, William Vangeance. As per his request, Siren demonstrates how to use the broomsticks.[5]

Much later, at a decoration ceremony Siren is promoted to a 1st Class Intermediate Magic Knight by the Magic Emperor.[2] Soon after Julius leaves, some of the Magic Knights begin to scrutinize the unwanted guests, but Siren does not take part or say a word.[6] Once the capital is under attack,[7] Siren uses his stone magic to create a living model of the capital. The Knights analyze the situation before Fuegoleon Vermillion orders the Golden Dawns to split up and protect the Royal Capital's Northwest and Eastern Districts. Siren then rides with Hamon Caseus and Klaus Lunettes in Klaus' steel chariot.[8]

After Siren, Klaus, and Hamon defeat the corpses in the Eastern District, a Spatial Magic spell activates and transports them and several other Magic Knights far away from the city.[9] The stranded knights combine their magical power together to create a compound spell that quickly carries them back to the Royal Capital. The Eye of the Midnight Sun members retreat upon seeing the Magic Knights return.[10]

Once the enemy leaves, Siren helps restore communication and reinforce the magic wall. After the Magic Emperor returns,[11] Siren listens as Julius tells them what happened. When everything is done, Siren returns to the Golden Dawn headquarters.[12]

Several months later, Siren is enlisted into the Royal Knights for his mana-sensing ability.[3] After the squad travels to the Gravito Rock Zone, Siren models the interior of the floating dungeon, and Mereoleona Vermillion explains the situation before dividing the squad into teams.[13] Nozel Silva infiltrates the dungeon with Siren, En Ringard, and Nils Ragus.[14]

Suddenly Siren and Nils begin glowing[15] and are possessed by elf spirits. The two then release their magic and turn on Nozel and En.[16] After En and Nozel escape with a smoke screen, Ado brings the other elves in the dungeon into the central room. Siren then steers the dungeon toward the Clover Kingdom and their revived brethren.[17]

Later that night, all the remaining elves are exorcised after William and Licht combine their magic to connect the elves to a giant tree through which Asta sends Anti Magic.[18]

Six months later, Siren is at the Golden Dawn base when Zenon Zogratis and two Dark Disciples attack. Siren tries to fight the Disciple Gaderois Godroc but is easily defeated by the Spade Kingdom mage's own Stone Magic.[19] After the battle, Siren is discovered to have died.[20]

Stone Model of the World