Sekke is a teenager with a lean build and medium-length blond hair. His hair is combed backward and held together with a black hairband, leaving only several strands left hanging in front of his forehead.

Sekke's attire consists of a grey shirt with a dark grey vest with a wide V-shaped collar on top of it. He also wears white trousers and a pair of black high boots that have a pair of tan belts on each of them. In addition, Sekke wears a tan belt that is connected to a pouch that he uses to carry his grimoire. The pouch is placed on his left-hand side. On top of everything, Sekke wears a magenta coat with long sleeves and black horizontal stripes around the forearms.

As a member of a Magic Knight squad, Sekke is wearing the squad's signature robe. It is made out of simple fabric with a hood and only covers his torso. It is held together in the middle of his chest. The squad's insignia is positioned on his left side. 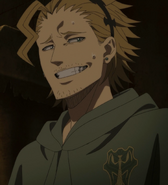 Sekke as a stressed Magic Knight

Sekke is a cunning man that would commit any act to increase his chance of gaining his desire. This side of him is reflected when he intentionally stayed near Asta during the Magic Knights Entrance Exam so the captains could compare his abilities solely with the former's poor performances.[4] In addition, he is also a very conceited person that likes to insult people whom he believes to be beneath him or he would create lies that elevate himself when he is with someone whom he believes to be above him.[5][6]

Furthermore, Sekke is also a womanizer that loves to flirt with women whom he finds attractive. His flirtation moves usually consist of standing in a seductive manner and giving them speeches that showcase his romantic side,[7] or lying about and exaggerating his accomplishments.[8]

Sekke also has a habit of saying the phrase "Fuhha!" in every occasion.[4][9]

At the age of 16 years old, Sekke enters the Magic Knights Entrance Exam for a chance to be accepted into a Magic Knights' squad. In order to increase his chances of selection, Sekke swiftly approaches Asta whom he deemed to be the worst participant based on his performance in the first test. Sekke then stays near Asta throughout the exam, as an attempt to have the captains judging the test, gauge his abilities highly in comparison to Asta.[4]

At the end of the exam, when William Vangeance reveals the final combat test, Sekke quickly asks Asta to be his partner, which the latter accepts. Before the match starts, Sekke finally shows his true intentions to Asta. While the latter turns speechless, Sekke activates his Magnum Cannonball and offers Asta the first attack as the match starts. Unbeknownst to him, Asta charges at Sekke at terrific speed and renders him unconscious in the process.[10] Despite his defeat, Sekke is recruited into the Green Mantis squad.[3]

After the exam is finished, Sekke is left with bitter feelings towards Asta. He then follows the boy to the bathroom and plans to launch a sneak attack at him. Unfortunately, his plan fails as Yuno steps in and breaks his curse spell. Sekke tries to give Yuno an excuse but he decides to leave after sensing Yuno's intimidating aura.[11]

A few days later, Sekke goes to Kikka's black market and gambles with an elderly woman. While he is suffering quite a loss to the old lady, Sekke begins to complain to himself about his experience working with his new squadmates. Subsequently, he notices a couple of beautiful ladies, Vanessa Enoteca and Noelle Silva, shopping not far from him. He immediately approaches and flirts with them but only to receive a cold and harsh rejection from them.[12]

At that moment, Asta interrupts their conversation. Completely surprised, Sekke learns that those ladies are acquainted with Asta. While they are having a conversation, the elderly woman who was gambling against Sekke is robbed by a thief. As Asta begins his pursuit, Sekke also activates his magic to stop him as well. After Asta nullifies the thief's magic, Sekke rams his Shooting Star into the thief, but in return, the thief stabs Sekke.[13]

As the thought of his imminent death fills his mind, Sekke tries to convey his final wish to Asta, who rejects his wish while encouraging Sekke to live. When Vanessa reveals that Sekke's injury is harmless, he immediately leaves, trying to cover his embarrassment.[14]

About a week later, Sekke shaves his facial hair and attends a blind date with a couple of acquaintances. During the date, he constantly boasts about his involvement in the Royal Capital's invasion and tells several lies as a result. The boasting causes the ladies to significantly lose interest in him, as they remain silent throughout the date. When he asks Noelle, who is waitressing, for a drink, she blasts him with her Water Magic.[15] Later on, a big burly man suddenly falls on top of Sekke. Since he is stuck under the man, the ladies decide to bail from the blind date.[16]

Sekke takes Aphro and Phati to Raque and they laugh at Finral Roulacase's attempts to talk to women. Sekke then tells his friends to go find girls of their own, directing them toward Noelle and Vanessa. After Noelle rejects them, Sekke recognizes the girls and is then sent flying as the other Black Bulls stampede across the beach.[17]

During the Star Awards Festival, when Yuno and Asta are recognized as the most successful rookies, Sekke denounces them as commoners and Asta as a fraud without magic power, so the crowd starts doubting the pair,[3] but Sekke is then flabbergasted by Yuno and Asta's display of power.[19] Later when Asta criticizes Augustus Kira Clover XIII, Sekke calls the boy a dumbass.[20]

A week later, Jack the Ripper selects Sekke from his squad's rookies to participate in the Royal Knights Selection Exam.[21] Sekke is placed on Team G with Langris Vaude and Fragil Tormenta.[22]

As their first match begins, Sekke freaks out because he is weak, and Fragil notices Sekke panicking and asks if he is okay and if he is strong like the Black Bulls. Sekke starts to act cool and suggests that he should blast around on his Shooting Star, with which Langris agrees. As Team G has finished putting up a barrier around their crystal, Sekke and Langris come riding towards them and Langris easily destroys the crystal and its defense, winning the match for Team G.[23]

For their second match, Sekke carries Langris around on his scooter, and they quickly locate Team E.[24] Finral launches a ball of Spatial Magic but it is slow moving so Sekke drives around it. However, the spell changes direction and continues toward Sekke, who decides to defend with his Magnum Cannonball. When the spells connect, Sekke is warped away to a bathroom in the Black Bulls base, which Yami happens to be using. The young Magic Knight panics as the captain threatens him.[25] Sekke is beaten up and Yami is preparing to finish him off with Dark Cloaked Dimension Slash when Cob Portaport arrives to fetch Sekke and drops him off on the battlefield with the rest of Teams B and G.[26]

After Julius explains the situation, Fragil questions Langris, who tells her to shut up. Sekke wonders about Langris's soured attitude and assures that his magic will be more help this time, but Langris refuses the offer, choosing to act on his own.[27] Sekke is riding around on his scooter when the match ends in a draw. When Zora Ideale starts criticizing Team G, Sekke tries to mock him but Zora gets in Sekke's face and calls out Sekke's false bravado.[28]

Several days later, Sekke is in the Royal Capital when the elves possess Magic Knights and other citizens. He runs away from their attacks and ends up near Clover Castle, where he finds the King by accident. He protects the King from a possessed Coral Peacock until the elf is exorcised. Augustus is extremely grateful and praises Sekke, who boasts about how easy it was. Four anti-monarchist nobles then arrive to assassinate the King. Sekke cannot defend the King because he is out of magic, but Damnatio Kira appears and stops the assassins.[29]

During a War Merits Conferment Ceremony, Augustus is outraged that Sekke's accomplishments during the elves' attack are not acknowledged while a peasant like Yuno is elevated to 1st Class Senior Magic Knight, so the King promotes Sekke to the same rank.[30]

Six months later, Sekke, Jack, and the other Magic Knights selected for the Spade Kingdom invasion gather at the Magic Knights Headquarters.[31] Trembling in fear, Sekke wonders to himself why the King would send him on such a dangerous mission. Jack threateningly orders Sekke to take the mission seriously, and Nacht Faust orders Sekke to sacrifice himself for those who are right, which terrifies and confuses Sekke more.[32] While one group enters the castle to fight the Dark Triad, Sekke and another group meet up with the Resistance in the castle town.[33]

After the first gate opens, hordes of devils emerge from the castle. While the others work on protecting and evacuating the citizens, Sekke hides in Makusa North's Snow Man Safehouse and boasts that he will stop any devils that find them.[34] When some devils break through the barrier, Sekke panics but reinforcements from the Heart Kingdom arrive and stop the devils.[35] 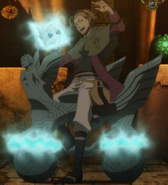 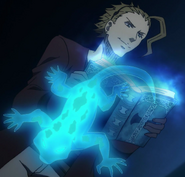