Sally is a young woman with a slender curvy figure who has dark red eyes and black-framed glasses. Her black hair is disheveled and medium-length. She wears a maroon top cropped to cover her breasts. Her maroon mini shorts are cut to expose her hips and are held up a string around her waist. She also wears a pair of black knee-high boots.

Over her outfit, she wears the white hooded robe of the Eye of the Midnight Sun. The long sleeves drape over her hands, and she often leaves the robe open, showing off her body.

After teaming up with the Black Bulls, Sally is given some of Asta's clothes to wear:[4] a white sleeveless tunic and a pair of light-colored shorts.[5]

Sally's outfit in the Eye of the Midnight Sun

Sally is an extremely curious individual that expresses interest in many bizarre things and tends to come off as somewhat unhinged. She shows interest in unique and strange magic such as Asta and his Anti Magic,[6] Grey and her Transmutation Magic,[7] Vanessa Enoteca and her Thread Magic, and Reve and her Dream Magic.[8]

Sally also likes to perform experiments and collect samples.[9] She even joins the Eye of the Midnight Sun because they allow her to run experiments that the Magic Knights would not allow. She later agrees to work in the Clover Kingdom's defense in exchange for freedom to experiment on Asta.[10]

She also shows little modesty as she wears her revealing crop top and shorts with her robe over them.

Sally and other members of Eye of the Midnight Sun show up to assist Valtos and Rades Spirito, who are having problems with Asta and his group. Soon the rest of the Magic Knights return and Nozel Silva uses Silver Rain to attack them, but Sally uses her Sticky Salamander along with a dark magic tool to absorb the properties of Silver Rain. Using the salamander's hand, she grabs Asta and escapes along with the rest of the group.[11]

In their hideout, Valtos tells Sally to kill Asta, but she refuses, wanting to use him in her research. As Asta wakes up, she keeps asking him if he wants to be used as her research, but they meet Julius Novachrono, who quickly kills two of their members.[12] Sally and the rest try to oppose him, but Julius is too strong for them and manages to bind all of them.[13] As Julius is intending to bring them as prisoners and ask them questions, Licht, the leader of the Eye of the Midnight Sun shows up and saves them.[14]

Sally heals Rades's injuries and tells him not to kill Asta because she still wants to study him, and then returns to studying a sample.[15]

Later, Sally has hired Baro and Neige to collect mana from children, but as they are defeated, Baro manages to alert Sally. Upon arriving, Sally is happy to see Asta again so soon. Gauche Adlai tries to attack her, but using her Sticky Salamander, she redirects his attack.[16] Hiding in the Sticky Salamander, she continues to redirect Gauche's attacks, until she turns to offense and catches Asta. Wanting to know about him, she licks him and tastes his blood. As Sally is about to take a nail from Asta, Theresa Rapual uses her magic to blow up the salamander.[17]

Baro asks if Sally can heal him to help her, so she injects him with a dark magic tool and his Mud Magic overflows and turns him into a large mud monster. Sally says that Baro is a failure[18] and then plans to take Asta home with her this time.[19] While Asta continues to battle Baro, Sally tells him what she did to Baro and that Asta's Anti Magic will not work. Sally then tries to capture Asta, but Theresa blocks the attack. Sally tells Theresa to stop getting in her way, but Theresa replies not to underestimate her.[20] Sally then continues to battle Asta and Theresa along with Baro.[21] Sally then tells Asta just to give up and let her capture him, but Asta says that he would rather die.[22]

When Gauche returns to help, Sally says that it does not matter how many there are, she is going to win. When Gauche attacks, Sally easily avoids the attack with her magic. Sally and Baro attack Gauche[23] and manage to destroy his Real Double and to knock Gauche to the ground. When Asta suddenly uses his Demon-Dweller Sword to launch a long-ranged attack, Sally is surprised and asks how Asta did that.[24] Sally along with Baro are defeated when Gauche creates multiples of Asta who use their long-range attacks.[25] Even defeated, Sally comments about how she has to investigate that spell and that Asta belongs to her.[26]

Sally is rescued by Licht who holds her in his arms.[27] Sally is then given to Valtos who takes her back to their headquarters.[28][29]

Months later, Sally, Rades, and Valtos lead an attack on the Black Bulls base.[30] Sally refracts Gauche's attack and reveals that they are not allowed to kill him. She then magically enhances one of the corpses. After Gordon Agrippa destroys it, she tries to neutralize his Poison Magic with her salamander, but Grey transmutes it into crystal, allowing Gauche to break it and catching Sally's interest.[31] She then watches as Rades uses No.0 - Michael Caesal to thrash the Black Bulls.[32]

When Henry Legolant appears from the base, Sally is confused as only three Black Bulls were supposed to be at the base.[33] She and Rades watch in amazement as Henry rearranges the base into a giant minotaur.[34][35] After the base smashes Michael Caesal into the ground, Sally activates her Magic Scorpion, dramatically increasing her magic power, and creates a Huge Sticky Salamander. She catches the base's Mana Corkscrew within her salamander and then increases its fluidity, allowing it to flood over and topple the base.[36] The other Black Bulls use their magic to transmute Sally's gel into plants and to destroy it with poison.[37]

With her salamander destroyed and Rades's puppet defeated, they are unable to continue fighting and Sally begins to feel the after-effects of her magic tool. Having retrieved the magic stone, Valtos returns and orders the retreat.[38] The three gather near the sephirot within the giant demon skeleton outside of Hage.[39]

Right before placing the last stone, Patolli reveals his hatred for all humans, including those within the Eye of the Midnight Sun. The humans watch as the last stone is placed and light pours from the sephirot.[40] Suddenly her, Valtos's, and Rades's bodies begin breaking apart, and Patolli then reveals that the naming ceremony was for marking them as sacrifices. Sally pleads with him as her body burns up and her mana is extracted.[41]

Later, after Patolli leaves for the Royal Capital, Rades's Soul Abductor brings him back to life. Seeking revenge on Patolli, he also brings Sally and Valtos back to life,[42] and the three teleport to the Black Bulls base.[43] Rades offers to assist the Black Bulls if they help with his revenge, but Asta refuses and instead convinces Sally to help the country, offering his own body for her experiments. Sally gladly accepts the deal, and Charmy Pappitson gives her a plate of Master Chef's food, restoring Sally's magic power.[44] Valtos then drops the Black Bulls' base in the capital.[45]

The base moves to Clover Castle and Sally contributes her Gel Magic to counter Rossa's Sandstone Magic.[46] After several elves are defeated, Reve pulls part of the base into her Glamour World.[47] Sally, Vanessa Enoteca, Luck Voltia, Magna Swing, and Charmy who were in that section of the base, are dropped onto a large bed, and Sally marvels at their surroundings.[48] Sally is then amazed by Reve's Dream Magic, Vanessa's Thread Magic, and Charmy's mana recovery.[49]

After Reve creates a large body of water, Sally has Luck electrolyze the water with Thunderclap Crumbling Orbs and then has Magna set off an explosion with Maximum Exploding Fireball. Although it does not injure Reve, it confirms Sally's hypothesis about Glamour World's creations.[50] When the spell's sleep-inducing effects start to take hold, Sally tricks Reve into thinking about a pair of glasses and multiple exits, thus causing her to manifest those things.[51] After Reve chains the doors closed, the mages trick the elf into imagining Dorothy Unsworth.[52] They then watch as the two Dream Magic users clash and cause the Glamour World to collapse. Once they return to the real world, Sally watches Magna and Luck hit Reve with Flame-Lightning Explosive Cannon,[53] which knocks the elf unconscious. The group then falls down in a large clump of cotton on top of the floating dungeon, crushing other Black Bulls beneath them.[54]

Everyone gathers down in the castle below to recover before heading into the Shadow Palace. As Mimosa Vermillion heals Asta, Sally tells him to take better care of his body because it is special and he promised it to her, which frustrates Noelle Silva and Mimosa. The mages are attacked by more possessed Magic Knights, but Mereoleona Vermillion and Fuegoleon Vermillion arrive and defeat the elves.[55] As more possessed Golden Dawns arrive, Sally remains behind to help fight them.[56] Yuno and a group of Magic Knights later arrive in the castle and defeat the elves.[57]

A few days later, Sally, Rades, and Valtos have returned to help repair the kingdom. Sally hears about Asta's trial at the Magic Parliament and hopes that he will have to join them so that he can fulfill his promise to her.[58]

Sally works with the Clover Kingdom's Magic Tool Research Lab and Makusa North to develop new magic tools for the war with the Spade Kingdom.[59]

Six months later, Sally and the others selected for the Spade Kingdom invasion gather at the Magic Knights Headquarters. Although she is disappointed that Asta is not joining them yet, she is delighted at the prospect of testing the magic tools she created from studying Asta.[60] While one group enters the castle to fight the Dark Triad, Sally and another group meet up with the Resistance in the castle town.[61] The mages stare in shock as the roots of the Tree of Qliphoth burst forth from the castle.[62]

After the first gate opens, hordes of devils emerge from the castle, so Sally uses her magic to escort citizens to Makusa's hidden space, where Valtos can safely evacuate the citizens.[63] When some devils break through the barrier, reinforcements from the Heart Kingdom arrive and stop the devils.[64] 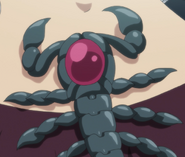