Rossa 「ロッサ」 is an elf and is reincarnated into the body of Ruben Chagar.[1]

Rossa is shown to hate humans.

Centuries later, Patolli sets the last magic stone in the sephirot, and Rossa possesses Ruben Chagar while Lira and two other elf spirits possess the rest of Ruben's team. Rossa and the other two follow Lira after he crashes through the floor.[2]

Mereoleona Vermillion challenges the five elves by herself, so the elves attack Mereoleona with a combined Angel Flapping.[6] When she counters their attacks, Rossa attempts to trap and suffocate her in a block of sandstone, but she breaks free and comes for him, which causes Rossa to feel Ruben's terror.[7] Rhya appears and slashes Mereoleona, and the other four rain down more feathers on her. However, she survives and attacks Rhya.[8]

When Mereoleona unleashes her strongest attack, the elves survive with minor injuries at the cost of most of their mana. Seeing that Mereoleona is also still alive, the elves combine their magic for one final attack to finish her off.[9] However, Zora Ideale and Asta quadruple the power of the spell and reflect it back at the elves. The spell passes overhead and detonates behind the elves, and the Royal Knights escape.[10]

Later, Ado brings Rossa and the other elves in the dungeon into the central room. The dungeon is then steered toward the Clover Kingdom and their revived brethren.[11]

From inside the dungeon, Rossa and some others look out over the destruction of the Royal Capital.[12] After the Apostles of Sephirah summoned the Shadow Palace, Rossa and the others attack the remaining humans in Clover Castle. Suddenly the Black Bulls base appears in the courtyard and punches the group of elves.[13] The elves regroup and prepare to attack the base, with Rossa creating a mass of sandstone. The base's cannons knock out four of the elves, hitting Rossa with Sally's amplified Gel Magic.[14] 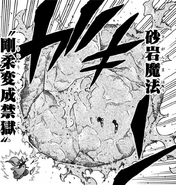 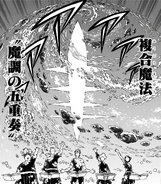