Roland 「ローラン Rōran」 is a member of the Clover Kingdom's Coral Peacock squad of the Magic Knights.[1]

Roland has grey hair with a curl above his forehead and two at each temple. The rest is gathered into a long ponytail.

While possessed by an elf spirit, two tattoos appear above Roland's eyes and extend below them, and his ears become pointed.[2] 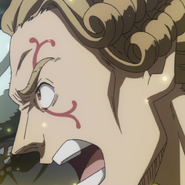 Roland possessed by an elf

At the Royal Knights Selection Exam,[1] Roland is among the Magic Knights annoyed by Zora Ideale's disrespect for Julius Novachrono and the other Knights.[3] Roland is later placed on Team J with Nix and Wainsley.[4] During their first match, Roland's trap ensnares Rill Boismortier, so Roland enhances the magic of his teammates, who target the captain.[5] Rill counters the two spells,[6] while Nils Ragus and Ruben Chagar destroy Team J's crystal.[7]

Several days after the exam, Roland is possessed by an elf spirit and attacks the Magic Knights recovering in Clover Castle, but Fuegoleon Vermillion and Salamander incinerate the Plant Magic and defeat the possessed Coral Peacock.[8]

Later that night, all the remaining elves are exorcised after William Vangeance and Licht combine their magic to connect the elves to a giant tree through which Asta sends Anti Magic.[9] 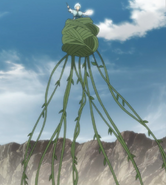