Rokken is a man with medium-length, combed back, brown hair as well as large sideburns and a short goatee.

At the Crimson Lion base, the vice captain Randall Luftair is possessed by an elf spirit and attacks the other Crimson Lions. Leopold Vermillion refuses to back down and rallies the others.[2] Rokken and three other Senior Magic Knights attack the elf together but are quickly defeated. Rokken's Solid Rock spell is destroyed by the elf's Crushing Air Blast, which also throws Rokken into a wall.[3] Fuegoleon Vermillion, with the help of Salamander, wakes from his coma and defeats the elf.[4][5] 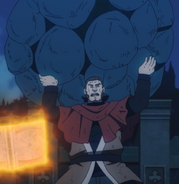 Retrieved from "https://blackclover.fandom.com/wiki/Rokken?oldid=59722"
Community content is available under CC-BY-SA unless otherwise noted.