Start a Wiki
watch 01:07
'Black Clover' Profile: Rill Boismortier
Do you like this video?

Rill Boismortier 「リル・ボワモルティエ Riru Bowamorutie」[1] is the captain of the Clover Kingdom's Azure Deer squad of the Magic Knights[2] and a member of the Royal Knights squad.[3]

He is the human host for the elf Lira.[4]

Rill is a young man with spiky, aqua-colored hair in a messy mound atop his head.

He wears a light-colored shirt under a dark blue vest that is held closed by a bronze-colored belt. His dark blue pants end halfway down his shins, and his shoes are bronze-colored slippers. Over this, he wears a long, white open coat with two pairs of large, turquoise diamonds on the front and on the sleeves. His squad robe has a dark blue tassel of diamonds hanging from the front clasp.

While possessed by Lira, two tattoos appear on Rill's cheeks and his ears become pointed.[5]

Rill as a Royal Knight

Rill enjoys painting to the point of shirking his captain's duties.[6][7] Despite this, he is very friendly, as shown by his interactions with Asta and Yuno, showing no interest in noble status. Further, he tried to lighten the mood at the captains meeting. He has somewhat destructive tendencies, as much of what inspires him is powerful magic, which he paints into even more powerful spells. After receiving his grimoire, he spent a great deal of time in his room painting powerful and destructive spells, until his butler forced his way past, at great injury, to talk to him.

After receiving his grimoire, Rill spends all of his time in his room working on his Painting Magic. He becomes frequently frustrated when others fail to understand his art and he lashes out with his magic.[8] One day after being particularly destructive, Rill is slapped by Walter who has been grievously injured. The butler explains that Rill needs to first understand others so that they can understand him, and then suggests that Rill join the Magic Knights and show off his magic at its greatest.[9]

At 19 years old, Rill becomes captain of the Azure Deer squad and is the youngest captain in history.[10]

Months later, at a meeting of the Magic Knight captains, Rill points out that the Crimson Lion squad has not replaced Fuegoleon Vermillion and the other captains go quiet, so Rill does an impression of Fuegoleon, which earns the scorn of Nozel Silva and Jack the Ripper but the amusement of Yami Sukehiro.[13] Arriving late, William Vangeance is questioned by the other captains. When the room goes quiet again, Rill does an impression of Yami, but this time the Black Bull chastises Rill for it, much to Rill's confusion.[14]

Marx Francois then contacts the captains and tells them to assemble in the dungeon.[15] There they listen as Catherine and George reveal the traitor to be Gueldre Poizot.[16] When the Purple Orca tries to escape, Asta dispells the captain's Permeation Magic and Rill then quickly restrains Gueldre with his Painting Magic, preventing the other captains from destroying the dungeon.[17] Impressed with Asta, Rill introduces himself and asks the boy a flurry of questions.[18]

After watching some of Gueldre's memories, Julius Novachrono orders the captains to search their own squads for more traitors but not to make the information public. As they all part, Rill bids farewell to Asta.[19]

At Julius' request, Rill attends the annual Star Awards Festival[20] and is stunned when the Azure Deer place ninth and last. Rill then grabs onto Asta, pleading to know how he collected so many stars.[21] After Augustus Kira Clover XIII announces the Royal Knights Selection Exam, Rill pledges to do better.[22]

After the ceremony, Yami boasts about his squad's rank, which annoys the other captains, but Rill defends him, pointing out that Yami did not lose hope after years of being last place.[23]

A week later, Rill disguises himself and enters the exam as X,[24] being placed on Team I with Nils Ragus and Ruben Chagar.[25] He quietly watches the other matches and is stunned by Kirsch Vermillion's performance.[26] When Rill reveals his true identity right before his first match, other Magic Knights protest that a captain is competing. However, Julius allows him to continue.[27]

As the match begins, Rill walks into a Plant Magic trap and is quickly ensnared and hoisted up into the air. With the captain defenseless, Team J release two enhanced powerful spells, which Rill finds beautiful,[28] causing him to reflect on the lesson Walter taught him. Wanting to impress Walter with his masterpiece, Rill counters both spells simultaneously with their counter elements.[29]

Rill is distracted contemplating and criticizing his artwork while Nils and Ruben destroy the crystal. They then have to drag him off the battlefield so that the next match may begin.[7] After witnessing Luck Voltia's skills, Rill shares Luck's excitement for their upcoming match against each other.[30]

As his second match begins, Rill happily wonders what his next painting will be. When he senses Team K concentrating their mana into a single spell, Rill rushes to finish his painting first. Inspired by Zora Ideale's counter traps, Rill uses God's Play to redirect the Thunder Arrow back at Team K, shattering the crystal. Team I is declared the victor, as Rill marvels at his own strength.[31]

During the final match, Rill laughs as he seals away Yuno and Sylph's attacks. After Yuno absorbs Sylph, Rill is inspired by his strength and excitedly paints a large vouivre, which releases a blast of magic that matches Yuno's Spirit Storm. The clashing of the spells elates Rill, who, in his excitement, lets loose his magic power and accidentally breaks his crystal. Team P is then declared the winners of the match and the tournament.[32]

Several days after the exam, Rill and the others selected to be Royal Knights all assemble in the Royal Capital and are placed under the command of Mereoleona Vermillion.[33] While waiting in line to get their new robes, Rill spaces out because of his loss to Yuno.[34] After everyone has changed, Mereoleona introduces additional members, including Nozel Silva. Rill is shocked that Nozel joined without taking the exam, which the Silver Eagle counters by asking why Rill did when he is a captain.[35]

After the squad travels to the Gravito Rock Zone, Mereoleona explains the situation and divides the squad into teams. Rill infiltrates the dungeon with Fragil Tormenta, Puli Angel, and Ruben.[36] Rill is busy critiquing his painting of a serpent when the two mages it has restrained suddenly start burning up, to Rill's shock.[37] As light shines out from the dungeon, Rill and his team begin glowing themselves.[38]

Rill is possessed by Lira and breaks through the floor with his Four-Headed Lindworm, crashing into the fight between Rhya and Mereoleona.[39] Later that night, all the remaining elves are exorcised after William and Licht combine their magic to connect the elves to a giant tree through which Asta sends Anti Magic.[40]

After the Clover and Heart Kingdoms form an alliance against the Spade Kingdom, Rill travels to the Heart Kingdom to train under the Spirit Guardian Potrof.

Six months later, when Charmy begins consuming all of the food in the Polnfrume Forest, Rill then takes over the fight for Potrof and, with Asta's help, manages to destroy Charmy's giant sheep and restrain her. Rill tells Asta that his inspiration comes from the woman who saved him while he was possessed by Lira. Asta explains that the woman is Charmy, but Rill does not believe him.[41]

Deux Tempêtes of Fire and Ice 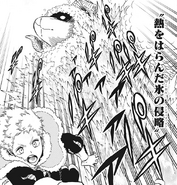 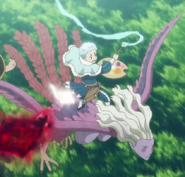 Walter is Rill's Butler and good friend. Rill cares for Walter as he "Made [him] human".

After being defeated by Charmy Pappitson and released from the elf reincarnation, Rill becomes attracted to Charmy's matured appearance. He is unaware that the woman is Charmy.[48]

Retrieved from "https://blackclover.fandom.com/wiki/Rill_Boismortier?oldid=60357"
Community content is available under CC-BY-SA unless otherwise noted.