Richita 「リチタ」[1] was the mother of Asta[2] and the foster mother of Liebe. She died protecting Liebe from Lucifero.[3]

Richita was a slim woman with green eyes and medium-length, ash blonde hair with a single strand protruding upwards from the center of her head. Her son Asta resembles her.

Richita wore a white shirt with sleeves that reached just past her elbows. Over this she wore an open, dark-colored vest and two belts. One belt held her grimoire pouch on her left side, while the other held a smaller pouch on her right hip. She also wore dark-colored pants that stopped at midcalf and a pair of light-colored shoes.

Richita was a compassionate and straightforward woman. She said what was on her mind, and did not hesitate to help a child in need, despite the fact that said child was a devil.[3]

She felt regret for having to abandon her son Asta at Hage Village.[4][2]

Richita was forced to live on the outskirts of a village due to her strange body that drained magic and lifeforce from others. After giving birth to Asta, she regretfully abandoned him in a basket on the doorstep of Hage's church.[3][2]

One day, she found Licht's five-leaf clover grimoire and, a few days later, happened to find a devil lying exhausted and injured in the woods. She brought the devil back to her house and took care of him, adopting him as her son and naming him Liebe. The pair lived a carefree and fun-filled life together, until Lucifero discovered that there was a devil in the living world and attempted to take over Liebe's body. Refusing to let another child go, Richita grabbed onto Liebe and absorbed Lucifero's magic power. Lucifero took control of Liebe's left arm and plunged it through her chest; however, she managed to force Lucifero out of Liebe's body. As she died, she put Liebe into the five-leaf clover grimoire so he could grow up safe from Lucifero.[3] 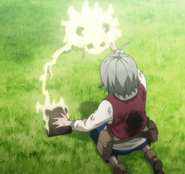 When she first found Liebe, she perceived him as an injured child, rather than a devil. After she rescued him, she adopted him and raised him as her son. Her love and kindness changes how he views himself and the world.[7] Thus, when Lucifero kills her, Liebe is overcome with grief, which fuels his intense hatred for devils.[8][9]