Reve 「レーヴ Rēvu」 is an elf and one of the ten Apostles of Sephirah.[1] She is reincarnated into the body of Dorothy Unsworth, captain of the Coral Peacock squad.[2]

Reve has shown herself to be calm, level headed, intelligent and not easily fazed by anything, as seen in her battle against the Black Bulls where she calmly analyzed her opponents abilities and powers before attacking and like many of her fellow elves Reve has shown to displayed a certain amount of over confidence and arrogance when in battle against humans, due to having a larger Mana pool to draw upon in comparison to them, as seen when she constantly underestimated the Black Bulls and thus was constantly caught off guard with them outsmarting her through taking advantage of her magic's weak points. Like many of her fellow elves, Reve has shown extreme hatred and disgust towards the humans of the Clover Kingdom, to the point that even the very thought of having anything in common with them brought her extreme disgust and displeasure, as seen in her interaction with her human host, Dorothy Unsworth, who playfully invited her to have fun with her and share dreams together, caused Reve to recoil in outrage and anger.

After Licht and Tetia's wedding, the Elf Tribe is massacred by humans.[4][5][6]

Centuries later, Patolli sets the last magic stone in the sephirot, and Reve possesses Dorothy Unsworth. Once all of the Apostles of Sephirah assemble atop of the floating dungeon, they summon the gate to the underworld.[7] After the Black Bull base appears and defeats several elves, Reve traps part of the building and some of its occupants in her Glamour World.[8][9] Reve ensnares them with vines and sends a baku to eat them. However, Vanessa Enoteca's Red Thread of Fate averts their death.[10] She counters Magna Swing's and Luck Voltia's attacks and then sends back three large elemental hands. Once again, Rouge averts disaster, so Reve tests their limits by creating a large body of water with an endless school of bladed fish.[11] Sally uses Luck and Magna to turn the water into a giant explosion, and Reve manifests a shield around herself.

When the others start feeling drowsy, Reve explains that it is an effect from the spell and that anyone who falls asleep will die.[12] Sally then tricks Reve into thinking about a pair of glasses and multiple exits, thus causing her to manifest those things.[13] Before the Black Bulls can escape, Reve wraps the doors in chains. The Black Bulls distract her with a smokescreen and create a doll to trick her into imagining Dorothy.[14] Reve fights with Dorothy and is disgusted by the captain's desire to play. As the two try to out-create the other, the world is overwhelmed and collapses. Once outside, Magna and Luck take advantage of the opening and hit Reve with Flame-Lightning Explosive Cannon,[15] which knocks the elf unconscious.[16]

Later that night, all the remaining elves are exorcised after William Vangeance and Licht combine their magic to connect the elves to a giant tree through which Asta sends Anti Magic.[17] 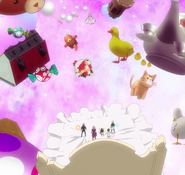