Revchi is a tall man with a lean build. He has messy and wavy long black hair. One of his distinguished feature is his burn mark on the lefthand side of his face, which he receives on his last mission with the Magic Knights.[5] 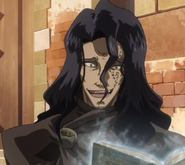 Revchi possesses a nasty personality, as he will do anything for money. He is very prideful, as he mentions his previous affiliation with the Magic Knights as well as his epithet when he snatches Yuno's grimoire.[1] Revchi may also find joy in harassing people, which is shown when he mocks Asta of his ability and upbringing.[6]

Revchi joins the Purple Orca squad of the Magic Knights and becomes known as "Chain Magic Revchi."[1][5] After some years, Revchi is set up by Gueldre Poizot to fail a mission, resulting in his facial burns and eventual discharge from the squad.[7]

Two years later,[5] Revchi attends the Grimoire Acceptance Ceremony held in Hage. He witnesses the moment when Yuno receives a rare four-leaf clover grimoire, after which Revchi plots to steal it.[8] Later that day, Revchi ambushes Yuno near the ceremony venue by binding him with his Chain Magic and snatches the grimoire while mentioning that a lot of people will pay a large sum of money for it. He is then confronted by Asta, whom he is able to suppress in a single attack.[9]

While Revchi fails to bring Asta's morale down, a grimoire appears before him and summons a sword for Asta. Revchi recognizes it as the five-leaf grimoire, which represents the devil. He quickly tries to attack Asta with his chains but fails when Asta nullifies his magic and sends him flying to the wall.[10]

Revchi is later imprisoned in the dungeon beneath the Magic Knights Headquarters.

A year later, Revchi is freed due to destruction caused by the revived elves. He reunites with Gueldre and they bond over their shared resentment for Asta.[11] Suddenly an elf breaks into the dungeon and prepares to kill the humans, so Revchi and Gueldre work together to take down the elf. Gueldre turns both of them invisible, and Revchi binds the elf with his chains.[12]

Revchi and Gueldre make their way into Clover Castle and see the Shadow Palace. Revchi is surprised that Gueldre knows of it.[13] The pair sneak into the Shadow Palace and collect bags of treasure. Gueldre's magic hides them from Zagred's magic pouring down from the upper floors, and Revchi regrets following Gueldre into such a dangerous situation.[14]

After Zagred is defeated, Yami Sukehiro finds the two Purple Orcas, and Revchi and Charla pull the four of them up through an opening Yami cut to the topmost chamber.[15] After returning to Clover Castle, Revchi watches as William Vangeance, Licht, and Asta exorcise the remaining elves.[16]

Among the treasures retrieved from the Shadow Palace is Yuno's magic stone. Revchi gives the stone to William, who returns it to Yuno.[17]

A few days later, Revchi is helping Gueldre, Sally, Rades Spirito, and Valtos clean up the rubble in the Royal Capital. Revchi and Gueldre laugh at the newspaper article about Asta's trial until Jack the Ripper threatens them.[18] 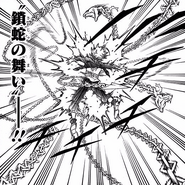 Dance of the Pitless Viper