Ratri 「ラトリ Ratori」 is an elf and is reincarnated into the body of Langris Vaude.[1]

While possessing Langris, two red tattoos appear on Langris's forehead and run down to his cheeks, passing over his eyes, and his ears become pointed.[2] 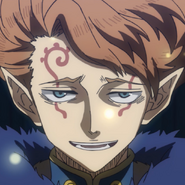 Like the other elves, Ratri expresses hatred for humans and royalty.[3] He describes himself as twisted.

Later upon confronting the Human Royalty of the Clover Kingdom,Ratri expresses the same arrogant demeanor and habit of underestimating them as his fellow elves towards humans due to having superior pools of mana to draw upon in comparison to them and also due to Augustus Kira Clover XIII own foolishness only increasing his condescending demeanor towards them.

Later upon being contentiously cornered and overpowered by Yami,Jack and Finral, Ratri's hatred and anger towards humanity began reaching its peak and his body and mind began to deteriorate into a Dark Elf,as seen when he began to gradually lose his patience,composure and self control over himself until he eventually began a destructive rampage with his Spatial Magic grinding away everything and everyone around him blindly while screaming curses at humanity.

Later as seen in his cousin Patolli's memories,Ratri was seen to have a more kindhearted and good natured personality in the past, as seen in his memories playing together with him as children. This positive personality seems to have returned upon seeing the Truth regarding the elf massacre and finally being released from the effect of the Reincarnation Magic,as seen when he peacefully looked on at the Clover Kingdom as he left Langris's body.

After Licht and Tetia's wedding, the Elf Tribe is massacred by humans,[4][5][6] and Zagred casts a Reincarnation Magic spell on them.[7]

Ratri makes his way to the throne room and attacks Ledior Vaude, who defends with his own Spatial Magic but is overwhelmed. When Augustus Kira Clover XIII shows off his own magic, Ratri carves through it, destroying the king's throne and crown too. Finesse Calmreich tries to stop Ratri from dismembering the king, but the elf throws her aside and attacks her. Finral Roulacase rushes into the room, blocks the attack, and rescues Finesse. After Yami Sukehiro and Jack the Ripper reach the room, Finral warps them over to Ratri but they are forced back by the elf's automatic defense.[10] 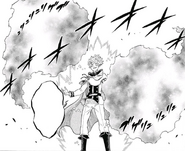