Randall is a man with brown hair and a slim build. He has a scar on his forehead. He also has a stubble mustache and goatee.

When possessed by an elf spirit, two tattoos appear under Randall's eyes and his ears become pointed.[1]

After Patolli sets the last magic stone in the sephirot, Randall is possessed by an elf spirit. He then attacks and defeats the other Crimson Lions at their base. Leopold Vermillion refuses to give up and rallies the others.[4] The elf taunts the Crimson Lions and easily dispatches their senior Magic Knights.[5] Leopold manages to fire off Spiral Flame, and the elf disperses the spell and launches a counterattack, which Leopold dodges.[6] Three senior Crimson Lions try to provide an opportunity for Leopold to flee, but Leopold collapses and the elf takes advantage of the distraction, blasting the three out of the way and preparing to kill Leopold.[7]

Before the elf can finish off Leopold, the base is engulfed in flames, and Fuegoleon Vermillion emerges and declares that he will take over the fight. The elf is surprised to see Salamander perched on Fugeoleon's new arm of fire.[8] The elf boasts about his own strength but is easily overwhelmed by Salamander's Breath, and Fuegoleon then restrains the elf with Leo Palma.[9]

Later that night, all the remaining elves are exorcised after William Vangeance and Licht combine their magic to connect the elves to a giant tree through which Asta sends Anti Magic.[10] 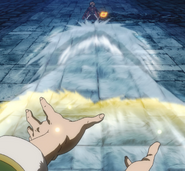 Retrieved from "https://blackclover.fandom.com/wiki/Randall_Luftair?oldid=60740"
Community content is available under CC-BY-SA unless otherwise noted.