Rades is a man of average height with long, messy, light purple hair and a blue eye. He wears a dark red bandages that covers his forehead and left eye with a light green eye ornament on top of the latter. Similar bandages are also tightly wrapped around his neck with the tattered end dangles in front of him. He has a scar on his right cheek where Asta's cut him,[4] and his left eye appears bloodshot.[5]

Rades's attire consists of a dark red tank top with a right sleeve and trousers of similar color. In addition, he also wears an elbow sleeve and a glove on his left arm. Moreover, Rades wears a big belt around his waist with a strap attached to it on both sides. He also wears a dark-colored bracelet on his right arm and two light-colored bracelets on his left arm. He wears a pair of boots with two light-colored stripes on each of them. Lastly, Rades wears a tattered cape that covers his body. The cape is held together by a button on his right shoulder.

During his younger years, Rades sports shorter hair and both of his eyes are intact. He wears a light-colored robe and a chain necklace.[6]

Rades in the Eye of the Midnight Sun 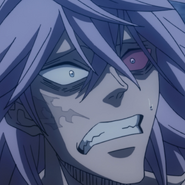 Rades as a young man

Rades is a cruel man who takes pride in his abilities. He believes that people with high magical power have the privilege to oppress those who are weaker than them. Additionally, Rades finds the act of receiving an attack and bleeding to be inexcusable, especially for someone of his caliber.[7] His pride also leads him to have a hard time forgiving anyone, as he still holds a grudge to the Clover Kingdom for banishing him.[8]

Rades is a commoner who hails from the Clover Kingdom. After receiving a grimoire, he enters a Magic Knights Entrance Exam and gets inducted into the Purple Orca squad. During his time as a member of the squad, the other Magic Knights are disturbed by Rades's Soul Corpse Magic and decide to banish him from the kingdom.[3] He later joins the Eye of the Midnight Sun.

Six years after his banishment, Rades sits at the outskirt of the Kingdom waiting for the group to finish their preparation. Once Valtos gives him the confirmation, Rades invades the Royal Capital and releases hordes of corpses on its streets.[9][10] The corpses cause a huge riot around the capital and attack the guards and citizens.[11] During the commotion, Rades corners a little girl but is interrupted by Asta knocking down his corpses.[12] He then tries to attack Asta with the fallen corpses, but none of them react. Rades realizes that his opponent is the Anti Magic user. As the little girl hides behind Asta, Rades summons a new batch of corpses to attack them.[13]

Overtime Asta manages to defeat all of the corpses and proceeds to attack Rades, who quickly summons No.4 - Jimmy to fight for him.[14] "Jimmy" shoots Magic Bullets filled with Curse Magic, which manage to scratch Asta's cheek and cause him to bleed extensively. Rades then orders "Jimmy" to shoot a barrage of those bullets at Asta, who is able to parry all of them. Due to this, Rades decides to shift his attacks toward the little girl whom Asta is protecting.[15]

During the assaults, "Jimmy" manages to land another attack on Asta, who was distracted by several attacks launched at the little girl.[16][17] Noelle Silva comes to Asta's aid and allows the boy to advance towards "Jimmy". Rades tries to prevent his opponent from closing in by summoning more corpses, but Leopold Vermillion clears a path for Asta to take "Jimmy" down.

Asta then challenges Rades to fight him personally, but the latter ignores it and summons a couple more corpses.[18] No.2 - Alfred is used to fight Asta while No.3 - David is fighting against Leopold and Noelle. Using "Alfred", Rades is able to dominate the fight as Asta is unable to reduce the distance between them. The moment Rades sees an opening, he immediately orders "Alfred" to launch the finishing attack. However, Fuegoleon Vermillion, the Crimson Lion's captain, incinerates "Alfred".[19]

The captain asks Rades for the reason behind his attack, to which he reveals his identity. After a slight argument, Rades summons another corpse, No.1 - Carl, in preparation to fight Fuegoleon, who launches an attack towards Rades. "Carl" perfectly withstands it, and Rades orders "Carl" to launch a barrage of attacks, which forces Fuegoleon to activate a defensive spell. Rades boasts of the corpse's defenses and believes that Fuegoleon is cornered by his corpse's attack, but the Crimson Lion suddenly releases Sol Linea, which easily incinerates "Carl". Unable to react against the attack, Rades is dumbfounded and speechless with the turn of events.[20]

Not long after, Leopold and Noelle are able to take down "David" as well, and Fuegoleon restrains Rades. When his grimoire is confiscated, Rades pleads for Fuegoleon not to open it. However, he becomes silent when Asta speaks to him. Subsequently, Rades receives a notification from Valtos, in regards to their next move, while Fuegoleon asks him of the invasion's true purpose, yet again. At that moment, Rades reveals to Fuegoleon that his group's mission is the captain's assassination.[21]

Suddenly, Fuegoleon is transported away from their location, which prompts Rades to fall in laughter as Leopold demands an answer to his brother's whereabouts.[22][23] His restraints then disappear when Fuegoleon returns unconscious. Rades then ambushes Leopold and sends him flying towards the wall. The rogue mage then promises Asta that he will return to kill him as Valtos activates his Spatial Magic around Rades. Asta prevents him from escaping and slashes him on the cheek. Rades becomes helpless as he is unable to defend against the young Knight's assaults while Valtos is unable to help him.[24]

Reinforcements arrive for Rades and Valtos and take over the fight from both of them.[25] The Eye of the Midnight Sun member then joins his teammates when they decide to escape after more Magic Knights arrive to the scene.[2] As they reach their hideout, Rades is caught in a slight argument with one of his teammates for his attempt on fighting a captain.[26] Upon their entry to the hideout, Rades is greeted by Julius Novachrono, the Magic Emperor, who swiftly kills three of his colleagues. Rades is then rendered unable to retaliate when Julius restrains him in a time loop.[27]

Licht arrives in a flash of light and takes Rades away along with his teammates before Julius is able to extract any information from him.[28] At the Eye of the Midnight Sun's other underground hideout, Rades unleashes his frustration over Asta by destroying several pillars while stroking the wound, which he received from the latter. At that moment, Sally approaches him and argues that her Healing Magic should have removed any pains. When she asks him to leave Asta alive, Rades immediately tells her that the Black Bull mage is his prey.[29]

Months later, Rades, Sally, and Valtos lead an attack on the Black Bulls base.[30] When the Black Bulls put up resistance, Rades summons No.0 - Michael Caesal and uses it to crush them.[31] Rades mocks them for refusing to give up but is interrupted by an alarm sounding from the base.[32]

When Henry Legolant appears, Rades attacks him too, but Henry moves his room out of the way. Thinking that Henry cannot attack or defend, Rades turns his attention back to the other Black Bulls and attacks them, and is surprised when the base blocks with a series of rooms.[33] Henry introduces himself, but Rades does not care and attacks again.[34] His glee turns to shock when Henry rearranges the base into a giant minotaur.[35][36]

Rades challenges the base, but a Mana Corkscrew knocks him and Michael back and a Mana Rocket Punch slams Michael into the ground. Rades then struggles to make the corpse stand again.[37] After Sally topples the base and the Black Bulls destroy her Huge Sticky Salamander, Rades takes advantage of their distraction to attack. However, Henry delivers one last Mana Corkscrew to Michael,[38] damaging it enough to stop it permanently. Outraged, Rades is interrupted when Valtos returns to the battlefield, having retrieved the magic stone. Rades refuses to leave but Valtos will not accept failure again, and teleports the other Eyes of the Midnight Sun away.[39]

The three gather near the sephirot within the giant demon skeleton outside of Hage. Right before placing the last stone, Patolli reveals his hatred for all humans, including those within the Eye of the Midnight Sun. The humans watch as the last stone is placed and light pours from the sephirot.[40] Confused by Patolli's comments, Rades demands answers. Suddenly his, Valtos's, and Sally's bodies begin breaking apart. Patolli then reveals that the naming ceremony was for marking them as sacrifices, which causes Rades to rage. His anger is short-lived as his body burns up and his mana is extracted.[41]

In his last moments, Rades's magic evolves and brings him back to life after Patolli leaves for the Royal Capital. Furious at the betrayal and seeking revenge, he also brings Sally and Valtos back to life,[42] and the three teleport to the Black Bulls base, where Rades plans to use them to exact his vengeance.[43] Rades offers to transport them directly to the capital and to strengthen their magic if they will help kill Patolli. Asta refuses to work with Rades for revenge and wants him to atone instead.[44] After Sally and Valtos are convinced to help the country, Rades reluctantly accepts and eats Master Chef's food.[45] As promised, Valtos drops the base in the capital.[46]

After the Apostles of Sephirah summon the Shadow Palace, the base is warped into Clover Castle's courtyard and fights several elves.[47][48] When the group of elves is defeated, Reve pulls part of the base into her Glamour World, while Patolli and Drowa combine magic to destroy the rest of the base.[49] Gordon and Grey manage to cushion everyone's falls. Seeing Patolli fly off into the Shadow Palace's gate, Rades orders Valtos to warp the two of them over there.[50]

Inside the Shadow Palace, Rades and Valtos track down Patolli to the eleventh chamber, but Zagred torturing Patolli terrifies them too much to enter the room. Rades wonders if the devil used the elf like Patolli used his human followers.[51]After Zagred is defeated, Valtos warps Rades and a group of Magic Knights and elves up to the topmost chamber where the exit is, saving them from the devil's magic. Asta points out that Rades did not do anything to help again, which angers Rades.[52]

After the humans and elves return to Clover Castle, Rades watches silently as Patolli volunteers to be exorcised so that William, Licht, and Asta can exorcise the still rampaging elves.[53] Rades recognizes that Patolli's sacrifice fulfills the requirements of his spell so he resurrects the elf in Licht's artificial body. Rades refuses to forgive Patolli and demands that the elf repent for what he did to others, especially Rades. Rades and Valtos then leave together.[54]

A few days later, Rades, Sally, and Valtos have returned to help repair the kingdom. Rades complains about the work and is almost cut apart by Jack the Ripper, who tells them to be quiet.[55]

Six months later, Rades and the others selected for the Spade Kingdom invasion gather at the Magic Knights Headquarters.[56] While one group enters the castle to fight the Dark Triad, Rades and another group meet up with the Resistance in the castle town.[57] After the first gate opens, hordes of devils emerge from the castle. Rades stands in Makusa North's Snow Man Safehouse while the others work to protect and evacuate the citizens.[58] 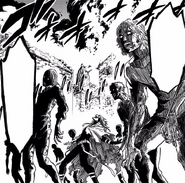 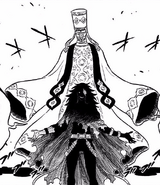 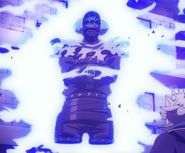 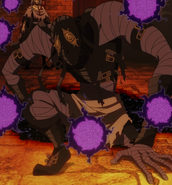