Puli is a plump woman with her blonde hair pulled back into several tight buns.

She also wears a light-colored, furry cape under her squad robe, and her grimoire hangs in a pouch on her left side.

While possessed by an elf spirit, tattoos appear on Puli's cheeks, her ears become pointed, and her hair buns becoming undone and loose and floats up, into the air looking like flames.[4]

Puli as a Royal Knight 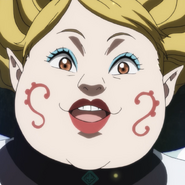 Puli possessed by an elf

Puli is always enthusiastic and willing to work with others, even if she does not initially like them.[2]

At the Royal Knights Selection Exam, Puli is placed on Team K with Luck Voltia and Klaus Lunettes.[5] During their first match, Puli grabs the crystal and flies up into the air when her teammates lose focus. She then uses Angel Flapping to distract Team L and to boost Luck forward, but Rob Vitesse appears blocking Luck's way.[6] Luck then kicks Rob into the crystal, destroying it, and Team K are declared the winners, who then high-five each other.[7]

During their second match, Team K plan to take out Rill Boismortier before he can exploit their weaknesses so they combine their magic to create Thunder Arrow, with Puli supporting her teammates from behind. Despite the spell's speed and power, Rill redirects it back at Team K, shattering the crystal and winning the match.[8]

Several days after the exam, Puli and the others selected to be Royal Knights all assemble in the Royal Capital and are placed under the command of Mereoleona Vermillion.[9][10] After the squad travels to the Gravito Rock Zone, Mereoleona explains the situation and divides the squad into teams. Rill infiltrates the dungeon with Puli, Fragil Tormenta, and Ruben Chagar.[11]

As light shines out from the dungeon, Puli and her team begin glowing themselves.[12] They are all possessed by elf spirits and follow Lira after he crashes through the floor.[4]

Later that night, all the remaining elves are exorcised after William Vangeance and Licht combine their magic to connect the elves to a giant tree through which Asta sends Anti Magic.[13]