Paplo is a young man with short black hair and blue eyes.

Paplo wears a plain white robe that is cinched at his waist by a black belt. Under this, he wears a purple long sleeve shirt and purple tights. His shoes are black with gold trim around his ankle. On top of his robe, he wears a shorter, green robe.

Paplo is a meek individual who prefers to avoid the battlefield.

He is very loyal to the members of House Silva and was very concerned when he saw the Silva siblings injured.

During the Battle of Clover Castle, Zora Ideale saves Paplo and carries him up to Solid Silva's room. After protecting Solid and Nebra from an elf's attack, Zora tosses Paplo over to them and orders the servant to heal the injured. Paplo creates a large seashell full of bubbles underneath Nebra and asks Solid to bring over the injured Nozel.[2] However, Nozel stands up on his own and continues fighting.[3] After the group of possessed Golden Dawns are defeated, Nozel allows Paplo to heal him.[4]

Paplo watches as another group of elves jump down from the floating dungeon to attack the humans, but the Black Bulls and their base appear in the castle and defeat the elves.[5] After the Black Bulls defeat more of the elves and Fuegoleon and Mereoleona Vermillion arrive at the castle, Nozel rises from the seashell, and Paplo is impressed with the captain's recovery speed.[6]

Bubble Refresher
Add a photo to this gallery 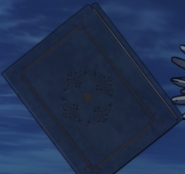 Paplo's grimoire
Add a photo to this gallery

Retrieved from "https://blackclover.fandom.com/wiki/Paplo_Espuma?oldid=81384"
Community content is available under CC-BY-SA unless otherwise noted.