While possessed by an elf spirit, two red tattoos appear on Owen's cheeks and his ears become pointed.[2] 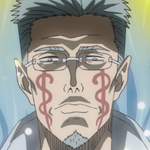 After the tenth match, Owen accompanies Julius Novachrono and Marx Francois to the battlefield and begins treating the heavily-injured Finral Roulacase.[7][8] Before the next match, Owen moves Finral to a safer location and continues treatment.[9][10]

Several days later, after Julius is fatally stabbed, Marx is sent to fetch the healer,[11] but as they fly to the tower,[12] they are possessed by elf spirits and attack Magic Knights along the way. When they threaten to harm Julius's body, Yami goes on the offensive and quickly knocks them unconscious.[13]

Later that night, all the remaining elves are exorcised after William Vangeance and Licht combine their magic to connect the elves to a giant tree through which Asta sends Anti Magic.[14]

Retrieved from "https://blackclover.fandom.com/wiki/Owen?oldid=60410"
Community content is available under CC-BY-SA unless otherwise noted.