View source
watch 01:23
Wiki Targeted (Entertainment)
Do you like this video?
Play Sound

While possessed by an elf spirit, two red tattoos appear on Owen's cheeks and his ears become pointed.[2] 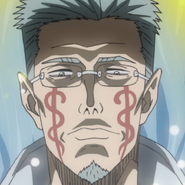 After the tenth match, Owen accompanies Julius Novachrono and Marx Francois to the battlefield and begins treating the heavily injured Finral Roulacase.[7][8] Before the next match, Owen moves Finral to a safer location and continues treatment.[9][10]

Several days later, after Julius is fatally stabbed, Marx is sent to fetch the healer,[11] but as they fly to the tower,[12] they are possessed by elf spirits and attack Magic Knights along the way. When they threaten to harm Julius's body, Yami goes on the offensive and quickly knocks them unconscious.[13]

Later that night, all the remaining elves are exorcised after William Vangeance and Licht combine their magic to connect the elves to a giant tree through which Asta sends Anti Magic.[14]

Several days after this, all of the Magic Knight Squad Captains gather to make an appearance in front of the people of the Clover Kingdom and to show them that they remain strong after everything that occurred with the elves. Owen disguises himself as Julius to keep the fact hidden that Julius has been turned into a child.[15]

A few days later, the Devil Banishers' attack leaves Asta comatose, so the boy is brought to Owen in a room of Clover Castle. Owen determines that Asta was hit by a powerful sleeping potion. After Marx displays Asta's memories of the Devil Banishers's attack, Yami smashes one of the walls, and Owen pleads with him to stop.[16] Owen uses his magic to help remove the drug from Asta's body. He then sits at Asta's bedside until the boy wakes up that night.[17]

Six months after the elves' attack, the Black Bulls bring Asta to Owen for him to analyze Asta's injuries. Owen is unable to do anything about Asta's devil arm and cannot have other healers analyze it because they are out helping with the Golden Dawn squad's injured members. Grey requests that the healer inspect Gauche Adlai as well, and Owen is surprised to see that Gauche's tissues were reassembled rather than simply healed. He speculates that her magic may not truly be Transformation Magic. Seeing the Black Bulls' glum expressions about their situation, Owen tells them all to rest and informs them that a captains meeting is being held soon.[18]

Español
Community content is available under CC-BY-SA unless otherwise noted.