Orsi is a middle aged man with short, gray hair and a goatee.

Orsi wears a long, black robe with a wide, white bands at the hem and cuffs. He also wears a high-collared, white mantle and a gold necklace with a cross. 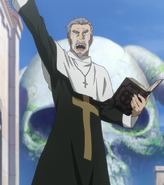 Orsi is shown to treat the orphans as his children. He is a good, honest, and hardworking man who tries to instill morality and virtues into the children for whom he is responsible. He is proud of Asta and Yuno for their quick rise in the ranks of the Magic Knights, as well as overjoyed in their generosity for sending most of their monthly wages to the village church, allowing them to repair the old building and afford food for everyone to eat filling meals every day. He openly says if Asta or Yuno ever wished to return to Hage, the church will always be their home.

In spite of his virtues, he is also somewhat vain, easily offended, and overly dramatic, demanding to know why Asta never mentions him in his letters home.

One morning, Orsi discovers Asta and Yuno on the doorstep of the church in Hage. He takes them in and raises them with the help of Sister Lily.[3]

Fifteen years later, Orsi attends the yearly Grimoire Acceptance Ceremony. He is shocked when Asta does not receive a grimoire while Yuno receives a four-leaf clover. Afterwards Orsi heads back to the church to prepare a feast.[4]

Six months later, Orsi and Lily visit Drouot and ask about Asta's grimoire, but the old man admits to being clueless about it.[5]

Several months later, the villagers of Hage are left confused after the kingdom is saved from the Arrows of Judgment and the demon skeleton shines with light. They watch as a dungeon rises over the skeleton and passes overhead. A possessed Purple Orca then attacks the villagers.[6] Orsi is struck by the elf's poisonous plants, leaving Lily to defend the orphans.[7] When the Demon-Slayer Sword fails to dispel the poison, Asta draws his new sword, which overflows with Anti Magic and nullifies the poison in Orsi and the other villagers.[8]

Orsi is overjoyed to see his foster sons again and is shocked when they immediately fly away.[9]

A few days later, Orsi is aghast to read the newspaper article about Asta's trial and refuses to believe it.[10]

Six months later, Ralph Niaflem travels to Hage in search of Yuno and collapses in front of the church. Lily and Orsi bring him inside and tend to him while sending word to Yuno.[11] Orsi and Lily listen as Ralph reveals that Yuno is a prince of the Spade Kingdom,[12] which shocks Orsi. After Ralph shows Yuno memories of the past, an emergency call from the Golden Dawn base interrupts the conversation,[13] and Yuno rushes off to defend his squad from the attack.[14]

A few days later, a demon attacks the Clover Kingdom, and Orsi and the others watch as Asta protects the kingdom.[15]