Nils is a man with a dark-colored hair in a bob style.

While possessed by an elf spirit, tattoos appear on Nils's cheeks and his ears become pointed.[5]

Nils as a Royal Knight 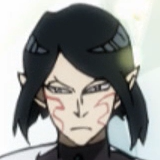 Nils possessed by an elf

Nils is shown to take his duty seriously.

During their second match, Nils and Ruben decide just to support Rill. The pair panic when faced with Team K's Compound Magic, but Rill is able to redirect the Thunder Arrow and destroy Team K's crystal.[8]

During the final match, Nils and Ruben confront Noelle Silva and En Ringard, while Rill fights Yuno.[9] Team I loses when Rill accidentally destroys his own crystal.[10]

Several days after the exam, Nils and the others selected to be Royal Knights all assemble in the Royal Capital and are placed under the command of Mereoleona Vermillion.[11] After the squad change into their new robes, Mereoleona introduces additional members and reveals the location of the Eye of the Midnight Sun's base.[12] After the squad travels to the Gravito Rock Zone, Mereoleona explains the situation and divides the squad into teams. Nozel Silva infiltrates the dungeon with Nils, En Ringard, and Siren Tium.[13] Nils is impressed with Nozel's displays of strength.[14]

Suddenly Nils and Siren begin glowing[15] and are possessed by elf spirits. The two then release their magic and turn on Nozel and En.[16] After En and Nozel escape with a smoke screen, Ado brings the other elves in the dungeon into the central room. The dungeon is then steered toward the Clover Kingdom and their revived brethren.[17]

Later that night, all the remaining elves are exorcised after William Vangeance and Licht combine their magic to connect the elves to a giant tree through which Asta sends Anti Magic.[18]