Neige 「ネージュ Nēju」[1] is a rogue mage and the younger brother of Baro. He assists his brother in kidnapping children in order to extract their mana for the Eye of the Midnight Sun.[2]

Neige is a lean man with long white hair that extends past his shoulders and with some hanging down in the front towards his nose.

Neige wears an open, long-sleeved white shirt, white pants, and white shoes. He also wears a blue scarf around his neck, and a blue belt that has a link of puff balls on his left side that connects to a blue grimoire pouch.

Neige is a timid person. Neige is shown to want friends so much he would kidnap and entrance children.[3] He is also quickly to anger when Marie Adlai points out that what he is doing is wrong. Neige also cares for his brother Baro as he wishes to make the person who transformed his brother into a monster pay. After Asta had saved him, Neige gains some courage as he was will to asks Asta to being his friend and is grateful that Asta does want to be his friend. Neige also feel remorse for what he and his brother had done and is willing to turn himself into the Magic Knight to make amends.

When they are children, Baro comforts a crying Neige with a mud doll.[4]

After setting up with his brother in the caves near Nairn, Neige uses his Snow Magic to entrance the town's children and to have them walk to the caves.[5] He greets the children as his new friends, but notices that Marie Adlai is no longer entranced. Marie comments that controlling people like puppets is not what friends do, to which Neige responds angrily, hitting the little girl. He is stopped by his brother who notes Marie's strong mana.[6]

After pulling mana out of several children, Baro demands that Marie be next. Neige fetches her and tells her not to anger his brother. Gauche appears, sees his sister his injury, and shoots at Neige. Baro tells Neige to fight back. Neige uses Snow Cry, which Gauche dodges with his Mirror Magic. He summons several Snow Friends but Gauche destroys them all with Reflect Refrain. Scared and overwhelmed, Neige asks for advice from his brother, who tells him to think for himself.[7]

While Asta confronts Baro, Gauche continues to overwhelm Neige. Desperate, Neige traps Gauche and his mirror, but his victory is short-lived as Gauche's Real Double shoots Neige in the back and frees the original.[8] Still angry over Marie's injury, Gauche kicks the fallen Neige. When Sister Theresa asks why they would do this to children, Neige cries that he just wanted some friends and again asks Baro what to do.[9]

After Sally appears and "heals" Baro, sticking him in the neck with her giant syringe, Baro screams and begins overflowing with mud, which distresses Neige.[10] The now-monstrous Baro sees his brother and tries to kill him, but Asta saves Neige, who is confused by this action. Asta tells him that Neige has not taken responsibility for his crimes yet.[11]

After Asta and Gauche combine attacks to taken down the mud monster and Sally, Baro rises again and attacks Asta. This time Neige saves Asta, freezing Baro. Neige tells Asta that he will make pay whoever turned his brother into a monster but that he first has to pay for his own mistakes and he will turn himself in. He begins to ask Asta if, after Neige serves his time, they could be friends but stops himself, not wanting to be too greedy. Asta, however, gladly accepts him as a friend. As Neige thanks Asta, he is shot down by Licht.[12] Asta carries Neige over to Theresa and the children.[13]

When Yami Sukehiro and Finral Roulacase arrive, Neige is taken to Nairn to be healed along with Theresa, Gauche, and the children.[14] There, Neige and the others give Gauche the rest of their mana so he can return and help Asta.[15]

Neige stays in Nairn. Months later, after the attack from the elves, Neige and Theresa are concerned for Marie when the Magic Parliament takes her to the Royal Capital. Some time later, Rebecca Scarlet comes running and shows them the newspaper article about Asta's trial.[16] 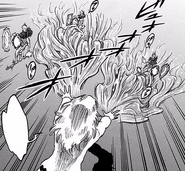 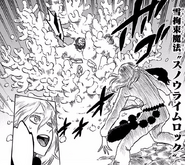