watch 01:19
'Black Clover' Profile: Nebra Silva
Do you like this video?

By extension, Nebra seems to be on rather good terms with Solid, as she is almost always seen with him. She was standing next to him during the Valor Ceremony, and the attack on the capital that followed. She also stood next to him during the Star Awards Ceremony. Finally, she is seen lightly teasing and comforting Solid some time after his defeat at the hands of Noelle during the Royal Knights Exam.

Interestingly enough, Nebra does not seem to have as great a confidence in her skills as her arrogant demeanor suggests, as, unlike either Solid or Noelle, she did not take part in the Royal Knights Exam (Nozel was chosen as captain in advance). Further, during the fight against the elves, after Nozel, and extremely powerful warrior, arrived, she still attempted to help her family retreat.

Nebra accompanies her older brother to a Magic Knights Entrance Exam. During the exam, she remains silent as she observes the examinees who are taking on the various tests.[2][3]

Nebra is invited to a War Merits Conferment Ceremony at the Magic Knights headquarters, which she attends along with her older siblings. When they are waiting for Julius Novachrono with several others Knights, the Magic Emperor arrives and brings five lower-ranked Magic Knights along with him to attend the ceremony.[4]

During the ceremony, Nebra is promoted to a 3rd Class Senior Magic Knight after collecting 9 stars from completing missions that were assigned to her.[5][6] At the end of the ceremony, Nebra and the other Knights are invited by Julius for a celebratory banquet that he had prepared.[7] After Julius leaves to attend another matter, several Knights begin to scrutinize the unwanted guests that Julius had brought. Nebra joins the commotion and reminds her younger sister, Noelle Silva, who is one of the unwanted guests, that she was exiled from the Silvas.[8]

Ultimately, Nozel orders Noelle to leave the hall. Asta prevents Noelle from leaving and declares to Nebra and the other honorary Knights that he will become the Magic Emperor, silencing them.[9][10] Seeing Asta's insolent act, Nebra immediately launches an attack along with her brother, Solid, and Alecdora Sandler.[11] Her attack is nullified but Alecdora manages to restrain Asta. Unlike her, Solid keeps attacking Asta but fails, and in the end Nozel decides to handle the matter by himself.[12]

Not long after, someone enters the banquet hall and informs them that the Royal Capital has been invaded.[13] After a strategy meeting with the rest of the Knights, Fuegoleon Vermillion orders Nebra and her siblings to protect the Royal Capital's Central District. Solid then summons a water-based eagle and carries his older siblings to their designated location.[14]

Upon arrival, they are immediately greeted with cheers by the citizens, who have been struggling against the invading army.[15] They soon realize that they are under attack by an army of corpses, and Nebra proceeds to mercilessly decimate all of them.[16] After all the corpses are defeated, a Spatial Magic spell activates under their feet and transports Nebra and the other Magic Knights a considerable distance away from the Royal Capital.[17]

Nebra and the rest of the Knights then combine their magical power together to create a composite spell that could transport them back to the Royal Capital.[18]

After Fuegoleon and Leopold Vermillion are taken to the medical ward and the city's defenses have been recovered, Nebra and the other Knights have a brief audience with the Magic Emperor.[19] Soon after, she follows Nozel as he leaves the venue.[20]

Nebra and Solid attend the Star Awards Festival and watch the ceremony from a tower, and shows great disappointment that her squad came in so low on the knight squad rankings.[21] Interestingly enough, she was not shown competing in the Royal Knights exam, unlike her brother younger Solid who did compete, and her older Nozel, who was chosen for the position in advance.

Several days after the Royal Knights Selection Exam, Nebra is in Solid's room, talking to him about his loss to Noelle, when a possessed Golden Dawn bursts into the room and threatens to kill them. Nebra creates several clones of herself, but the elf's Compass Magic is able to detect the real one. Pierced through the abdomen with a large compass needle, Nebra drops to the floor.[22] After Solid's attacks fail to reach the elf, Nozel and Noelle arrive and defend their siblings. Nebra is surprised to see that Noelle can successfully cast Roar of the Sea Dragon through the elf's mana. After seeing the spell deflected, Nebra realizes that they are outmatched and that she is a burden due to her injuries, so she raises a forest of mist to hide their escape. Refusing to allow them to run away, the elf uses Another Atlas to disrupt the mana in the room, dissolving the mist.[23]

Solid holds Nebra while Nozel and Noelle defend their siblings. Nebra is surprised when Noelle helps defeat the elf and when Nozel apologizes to Noelle.[24] After Kivn is defeated, more elves arrive and attack. Zora Ideale protects Nebra and Solid with a counter trap. He also drops off a royal servant, who begins healing Nebra.[25] 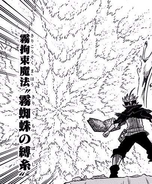 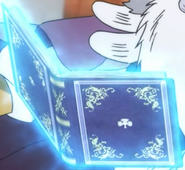 Retrieved from "https://blackclover.fandom.com/wiki/Nebra_Silva?oldid=41822"
Community content is available under CC-BY-SA unless otherwise noted.