Nebra Silva 「ネブラ・シルヴァ Nebura Shiruva」 is the first daughter of the Clover Kingdom's House Silva, one of its royal families. She is also a member of the Silver Eagle squad of the Magic Knights.

Nebra accompanies her older brother to a Magic Knights Entrance Exam. During the exam, she remains silent as she observes the examinees who are taking on the various tests.[1][2]

Nebra is invited to a War Merits Conferment Ceremony at the Magic Knights headquarters, which she attends along with her older siblings. When they are waiting for Julius Novachrono with several others Knights, the Magic Emperor arrives and brings five lower-ranked Magic Knights along with him to attend the ceremony.[3]

During the ceremony, Nebra is promoted to a 3rd Class Senior Magic Knight after collecting 9 stars from completing missions that were assigned to her.[4][5] At the end of the ceremony, Nebra and the other Knights are invited by Julius for a celebratory banquet that he had prepared.[6] After Julius leaves to attend another matter, several Knights begin to scrutinize the unwanted guests that Julius had brought. Nebra joins the commotion and reminds her younger sister, Noelle Silva, who is one of the unwanted guests, that she was exiled from the Silvas.[7]

Ultimately, Nozel orders Noelle to leave the hall. Asta prevents Noelle from leaving and declares to Nebra and the other honorary Knights that he will become the Magic Emperor, silencing them.[8][9] Seeing Asta's insolent act, Nebra immediately launches an attack along with her brother, Solid, and Alecdora Sandler.[10] Her attack is nullified but Alecdora manages to restrain Asta. Unlike her, Solid keeps attacking Asta but fails, and in the end Nozel decides to handle the matter by himself.[11]

Not long after, someone enters the banquet hall and informs them that the Royal Capital has been invaded.[12] After a strategy meeting with the rest of the Knights, Fuegoreon Vermillion orders Nebra and her siblings to protect the Royal Capital's Central District. Solid then summons a water-based eagle and carries his older siblings to their designated location.[13]

Upon arrival, they are immediately greeted with cheers by the citizens, who have been struggling against the invading army.[14] They soon realize that they are under attack by an army of corpses, and Nebra proceeds to mercilessly decimate all of them.[15] After all the corpses are defeated, black substances suddenly manifest under their feet and transport Nebra and the other Magic Knights a considerable distance away from the Royal Capital.[16]

Nebra and the rest of the Knights then combine their magical power together to create a composite spell that could immediately transport them back to the Royal Capital.[17]

After Fuegoreon and Leopold Vermillion are taken to the medical ward and the city's defenses have been recovered, Nebra has a brief audience with the Magic Emperor along with his fellow Knights.[18] Soon after, she follows her brother as he leaves the venue.[19]

Nebra and Solid attend the Star Awards Festival and watch the ceremony from a tower.[20] 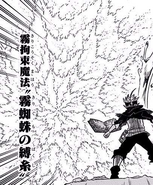