Nacht 「ナハト Nahato」 is the vice-captain of the Clover Kingdom's Black Bull squad of the Magic Knights[2] and the host of the devil Gimodelo.[3] He is also a former member of the Grey Deer squad.[1]

Nacht is a young man with fair skin and a soft facial structure. He has long, black hair that is pulled up into a high ponytail. He has light blue eyes. He wears a plain cord necklace, from which hang four devil-connected relics.

Nacht wears a dark-colored jacket with four buttons on the high collar. He has four blue belts around his waist and another pair of belts below with his grimoire pouch hanging off the left. His grimoire pouch has the Black Bull's insignia. His dark-colored pants are tucked into light-colored boots, which have sets of four belts.

When using some of Gimodelo's power, Nacht sprouts a pair of black horns from his forehead, and black markings extend down from the horns to his cheeks.[4]

During his time as a member of the Azure Deer squad, Nacht wears its squad robe over a light-colored jacket and dark-colored belts.[1] 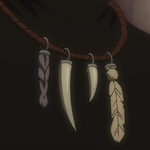 Nacht as a Grey Deer

Nacht is a pragmatic and logical person. He knows that Asta has no chance of saving Yami from the Dark Triad alone. He believes that losing a fight is the loser's own fault and considers losers to be idiots.

Nacht is not shy about expressing whether or not he likes someone. He is also unafraid of expressing his dislike of all the Magic Knight captains to their faces.

He has very specific ideas about what is good and bad; something is only good if it is good from the start, where as something bad that becomes good, though a pleasant surprise, is still ultimately bad. Nacht believes that doing good does not make up for past wrongs.[5]

During his time as a Grey Deer, Nacht had a more jovial personality, but the time he spent in the Spade Kingdom has changed him.[1]

Nacht and Yami Sukehiro meet in the Grey Deer squad of the Magic Knights. After Yami becomes captain of the new Black Bull squad, he decides to name Nacht the vice-captain. Nacht visits the base once before going undercover in the Spade Kingdom.[6][7]

While the Dark Triad are away attacking the Clover and Heart Kingdoms,[8] Nacht infiltrates the royal palace and searches through the documents in Dante Zogratis's room. A Dark Disciple discovers him, so Nacht disappears into a shadow and then pulls the Disciple down into his shadow. Nacht emerges from the shadows and walks away.[9]

That night, Nacht returns to the Clover Kingdom and catches Asta leaving the infirmary. Nacht restrains the young Magic Knight, talks him down from hastily chasing after the captured Yami Sukehiro, and then introduces himself, revealing that he knows how to use a devil's power.[10] He also introduces his devil, Gimodelo, before releasing his spell and letting Asta stand back up. Nacht explains that he has been undercover in the Spade Kingdom the whole time. Asta asks to learn how to use his devil's power, but Nacht refuses and instead insists that he rest.[11]

The next day, Nacht slips into the captains' meeting and interrupts, complimenting their motivation but criticizing the mess they made of the meeting. He rises up out of a shadow with Asta under his arm.[12] The captains move to attack the intruder, but Nacht uses his devil power to summon four masked beasts to stop them. Julius vouches for Nacht's identity, and Jack notes that Nacht's magic has changed. Nacht hands over the documents from Dante's room and explains the process for the Tree of Qliphoth. Rill Boismortier wonders why the Dark Triad are doing this, and Nacht claims that they are evil and their motivations are incomprehensible. In order to retrieve Yami and William and to destroy the Tree of Qliphoth, Nacht wishes to train Asta and his Anti Magic and to build a team around Asta.[13] Nacht explains his plan to slip into the castle, lists the Dark Triad's names and magics, and adds that the team will have to be limited in size. When Yuno requests to be on the team, Nacht asks who Yuno is since he was visited by a resistance member from the Spade Kingdom. Yuno reveals that he is the purported prince of the Spade Kingdom; however, he wishes to seek revenge on Zenon Zogratis for the sake of William Vangeance and the Golden Dawn squad. Nacht likes Yuno and Sylph's tenacity and power.[14]

Nacht announces that he will leave on the morning of the third day. Fuegoleon Vermillion suggests requesting help from the Heart Kingdom, but when Charlotte Roselei mentions the loss of contact with the Kingdom, Nacht reveals that Vanica Zogratis was out of the castle the day before and may have attacked the Heart Kingdom.[15]

Nacht deeply despises the Dark Triad because they hurt others for their own desires and without guilt as long as they benefit. He considers them unjust evil and refuses to understand them. Although others might be willing to forgive them, he never will.[22]

Nacht does not like Yami Sukehiro and resents being given the position of the Black Bull's vice-captain arbitrarily. Nacht's hate for Yami is the reason that he has only ever been to the base once.[23]

Retrieved from "https://blackclover.fandom.com/wiki/Nacht?oldid=71606"
Community content is available under CC-BY-SA unless otherwise noted.