Moris Libardirt 「モリス・リバルダート Morisu Ribarudāto」[1] is a Magic Scholar who is controlling the king of the Diamond Kingdom.[3] After being forced out by Mars, Moris begins working for the Dark Triad of the Spade Kingdom[4] and becomes a host of the devil Lucifero.[5]

Moris is a man with short, blond hair and tinted glasses with black frames. As revealed by him, he was born blind.

When using some of Lucifero's power, a dark-colored marking on his forehead expands with the vertical lines extending up into his hairline and down over his eyes to his cheeks. His irises change color and his pupils become vertical slits.[6] As he draws on more power, he grows Lucifero's four horns and wings, and his arms and hands turn black. The mark on his forehead can open like a mouth for Lucifero to speak.[5] 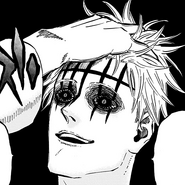 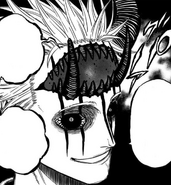 Moris is an exceedingly cruel man who psychologically tortures children[7] and then abandons them if he does not attain the desired results.[8]

Moris was born blind. After turning 15 years old, he receives a grimoire in the Diamond Kingdom.[9]

Over several years, Moris runs a series of experiments to bolster the power of Diamond Kingdom mages.[7][3][10] During one, he reconstructs Ladros's grimoire, enabling the boy to absorb, store, and release large amounts of mana.[11]

After another trial, Moris embeds mage stones into Mars and pieces together his grimoire with Fana's.[12] When Fana revives thanks to her phoenix-like powers, Moris performs the same experiment on her; however, he eventually abandons her because she does not improve.[8]

After the failed invasion of Kiten, Lotus Whomalt returns to the Diamond Kingdom and informs Moris and the new generation of Eight Shining Generals about the Golden Dawn squad's abilities.[13]

Some time after Mars and Ladros return from the Witches' Forest, Mars manages to force Moris out of the Diamond Kingdom. Moris, along with Lotus and two Shining Generals, ends up in the Spade Kingdom and uses his knowledge and technology in service of the Dark Triad. He designs mobile fortresses to harvest magic for the Tree of Qliphoth ritual.

When Dante Zogratis returns with serious injuries, Moris uses a healing chamber to close the wound and to strengthen Dante.[4] After Vanica Zogratis returns with Lolopechka, Moris becomes a host for Lucifero so that he can extract the Princess's inherited knowledge. He analyzes the information and develops a method to accelerate the Qliphoth Advent Ritual.[9]

A few days later, Zenon Zogratis checks in on the progress of Dante's healing, and Moris and Lotus update Zenon on the other preparations for the ritual.[4] Some time later, he is watching the monitors and informs Zenon that the Resistance members have arrived.[14] Moris then goes to the chamber holding Yami Sukehiro and William Vangeance and takes his place in the magic circle. His presence acts as an additional accelerant for the growth of the Tree of Qliphoth, and the first gate opens allowing two devils to cross over into the living world.[15]

Moris is watching devils climb out of the gate when part of the array disappears. He notes that Dante lost and wonders what magic defeated him.[16] Moris further modifies the ritual and tree so that it can continue running without the Dark Triad.

Walgner leads Dorothy Unsworth to the ritual chamber, but Moris's devil-boosted magic enables him to counteract her Dream Magic. When Lotus turns against him, Moris cuts off Lotus's right arm but offers to spare Lotus, if he returns to Moris's side, which Lotus refuses to do. Lucifero then speaks through Moris and warns that the next gate will open soon and that he will be free. Moris stitches multiple devils together into one and uses it to attack Lotus. However, The Raging Black Bull crashes through the castle wall and punches the devil, smashing it to pieces.[17] Intrigued about the Arcane Stage mages he heard from Dante, Moris creates clawed tentacles from his fingertips and begins disassembling the base, even negating Vanessa Enoteca's fate manipulation. Grey, with Gauche Adlai's help, transmutes the tentacles into flowers. Moris then switches to Gravity Magic and attempts to crush the base, but Henry Legolant, with Gordon Agrippa's help, drains Moris's magic power and uses it to reinforce the base and punch Moris, smashing him into the side of the floor opening. Moris is confused and outraged since he made himself into a higher being and contracted with the greatest devil.

The other Black Bulls arrive, and Asta hits Moris in the face with the Demon-Dweller Sword,[18] which knocks Moris unconscious.[19] Lucifero then takes control of Moris and uses the last of the human's magic and life to accelerate the ritual, opening the second gate.[20] 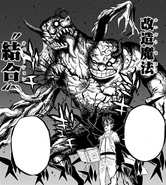 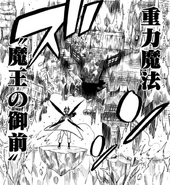