Mohl 「ラーモ Rāmo」 is a former member of the Clover Kingdom's Silver Eagle squad of the Magic Knights.[1]

Mohl and Goht organize a large group of bandits to attack towns and villages throughout the Clover Kingdom and to steal rare magic tools and other treasures. After Yami Sukehiro defends Zocodany Village and defeats the bandits, Mohl and Goht restrain the Grey Deer and plan to kill him. William Vangeance saves his squadmate, and together the two Grey Deer vice-captains defeat Mohl and Goht.[1] 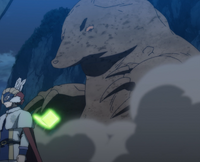 Retrieved from "https://blackclover.fandom.com/wiki/Mohl?oldid=71275"
Community content is available under CC-BY-SA unless otherwise noted.