Marx Francois 「マルクス・フランソワ Marukusu Furansowa」[1] is a nobleman, a 1st class Senior Magic Knight,[2] and one of the advisers of the 28th Magic Emperor, Julius Novachrono.[3]

Marx is a young man with fair hair in a bowl cut hairstyle. He has narrow eyes with long lashes and a typically serious expression on his face.

He wears a dark, long sleeved formal jacket under a light, furred mantle with an attached robe that reaches nearly to his ankles. The front of his mantle is decorated with an ornate chain and clasp. The collar of his jacket is trimmed with fur and has six diamond-shaped ornaments placed horizontally across the front.

While possessed by an elf spirit, two red tattoos appear on Marx's cheeks and his ears become pointed.[4] 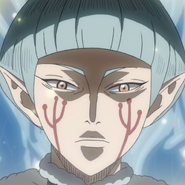 Marx possessed by an elf

Dutiful and serious, Marx is often frustrated by the Magic Emperor's tendency to shirk his duties and go off searching for new magic. He frequently loses his composure when dealing with Julius's starry-eyed outbursts about various magic, and struggles to keep the Emperor on task.

Though a high ranked mage who works alongside Clover's top officials, Marx has an amiable and courteous personality as shown when he treats Asta with respect despite his low status.

After Julius Novachrono undoes his Transformation Magic spell, Marx contacts the Magic Emperor and tries to talk to him about the emergence of a dungeon, but Julius keeps interrupting and, to Marx's surprise, is already aware of the dungeon and has someone in mind to handle it.[5]

After helping Julius address the citizens of the Royal Capital,[7] Marx tries to extract information from Catherine and George, the captured members of the Eye of the Midnight Sun. Unfortunately, his attempts are blocked by a protect magic spell on their minds. Julius asks his aide to keep investigating while they wait for Fuegoleon to open his eyes.[8]

Weeks later, Marx greets Asta when the boy wakes up after the battle in Nairn. Marx asks for his help with the prisoners[9] and leads him down to the dungeon, where they meet up with Julius. The Magic Emperor bombards Asta with questions about the magic he saw, and Marx shouts to refocus Julius. After Asta removes the protection magic on George and Catherine, Marx begins their interrogation anew.[10] They reveal that Gueldre Poizot is the traitor, so Marx calls the captains down to the dungeon so they can hear for themselves.[11][12] Gueldre denies the accusation and questions Marx's magic, but Marx swears by his magic.[13] After Gueldre tries to escape and is captured by Rill Boismortier, Marx begins interrogating the Purple Orca, revealing the captain's shady history and his part in enabling the invasion. Julius dismisses the other captains and has Marx continue the interrogation.[14]

At the Star Awards Festival, Marx stands behind Julius and projects the Magic Emperor's voice to the crowd.[15] He later does the same for Augustus.[16]

A week later at the Royal Knights Selection Exam, Marx once again accompanies Julius.[17] When Zora Ideale arrives and puts his arm around the Magic Emperor, Marx threatens the rogue, who is forced to join the other Magic Knights.[18]

After all the Knights travel to the battlefield, Marx projects the tournament bracket.[19] He then stands to Julius's right and quietly watches the matches.[20] When the Black Bulls rush the field to stop Langris Vaude from killing Finral Roulacase, Marx accompanies Julius and Owen onto the field. As Langris attacks Asta, Marx questions why Julius has not stopped the vice-captain, to which Julius responds that actual combat has no one saying when to stop or go.[21]

Several days later, Marx sees Julius fighting Patolli and alerts the Magic Knights squads.[22] After Patolli fatally stabs Julius, Yami orders Marx to fetch Owen,[23] and as Marx flies back with Owen to the tower,[24] they are possessed by elf spirits and attack Magic Knights along the way. When they threaten to harm Julius's body, Yami goes on the offensive and quickly knocks them unconscious.[25]

Later that night, all the remaining elves are exorcised after William Vangeance and Licht combine their magic to connect the elves to a giant tree through which Asta sends Anti Magic.[26]

A few days later, Marx rushes to Julius's room and is flabbergasted that he is still alive and has turned into a child. Marx begins crying in relief so Julius hugs him and apologizes. Marx refuses to forgive him so easily and informs him about the mounting pile of paperwork.[27]

Days later, Marx receives a call from Mimosa Vermillion and the Princess of the Heart Kingdom, Lolopechka. Julius interrupts and pushes Marx aside, and Marx scolds him for letting others see his weakened state. After some discussion with the Princess, Julius agrees to let the Knights help the Heart Kingdom. He also suggests going there himself, which Marx refuses to allow.[28]

Six months later, an elite team of Magic Knights infiltrates the Spade Kingdom in order to stop the Qliphoth Advent Ritual. That same morning, when the first gate to the underworld opens, an ancient demon lands in the Clover Kingdom, which alarms Marx and Julius.[29] Working together with Damnatio Kira, Julius disguises himself as an adult and flies out to stop the demon from attacking the capital; however, during the fight, Julius is reduced back to his child appearance.[30] Some time after Asta and Liebe destroy the demon, Marx flies over on a magic carpet and supports Julius, who has collapsed.[31]

After Lucifero is defeated, Marx transmits a report about the raid to Julius, who has returned to his office.[32]