Mariella 「マリエラ Mariera」[1] is a former assassin of the Diamond Kingdom that was tasked with bringing the deserters Fanzell Kruger and Dominante Code back to the kingdom,[2] but after encountering Asta, she chooses a different path of life.[3]

She is a voluptuous, fair-skinned young woman with pink eyes and short black hair.

Mariella is highly dangerous in combat since she is a former assassin but is also kind. While she feels she cannot atone for the blood she has on her hands, she believes she can partially redeem herself by saving others. She also has a sharp tongue, insulting people and being brutally honest with people.

Mariella was born in the Diamond Kingdom and is trained by Fanzell Kruger. After becoming an assassin, she is ordered to recover her former teacher and his wife, Dominante Code, for deserting the kingdom. However, she is stopped by Asta and other Black Bulls and convinced to leave with Fanzell and Dominante, settling outside of the Diamond Kingdom.[2]

In search of a cure for Asta's arms, Noelle Silva and Finral Roulacase visit the house of Mariella, Fanzell, and Dominante. When Fanzell answers the door naked, Noelle blasts him with water, and Mariella asks that she be careful not to break their rundown house. However, when Dominante starts hitting Fanzell for his inappropriate behavior, Mariella wonders if he will break before the house does.[4] After hearing what has happened to Asta, Mariella wants to help in order to repay the Black Bulls.[5]

The group returns to the Black Bull's headquarters, picks up a confused Asta, and rushes off to the Witches' Forest.[6] Outside of the forest, the group splits up and hides under two of Dominante's You-Be-Gone Cloaks, with Mariella having to share a broom and cloak with Dominante and Noelle. When Fanzell's cloak and clothes are accidentally pulled off, the Security Golems are alerted to the men's presence and chase the two groups through the forest. They crash land in the Witch Queen's throne room and see her standing on Vanessa Enoteca.[7]

When an army from the Diamond Kingdom and an army from the Eye of the Midnight Sun approach the forest, the Witch Queen displays them for the infiltrators to see.[8] Mariella and the others agree to help defeat the two armies in exchange for the Witch Queen healing Asta's arms, which she does.[9] Fanzell, Mariella, and Dominante decide to take on the Diamond Kingdom's army.[10]

Mariella coordinates the witches into teams and scatters them among the trees below, while Fanzell confronts the two Shining Generals, Mars and Ladros. When Fanzell attacks the generals' subordinates, the witches attack from below and break up the army's formations. Mohawq is knocked down into the trees and questions how the witches know so much about the Diamond Kingdom's strategies. Appearing behind him, Mariella explains that she used to be part of the kingdom's assassination unit, and then freezes him to a tree. He calls her a traitor, but she is not bothered by it. She then goes back to issuing orders to the witches.[11]

Mariella survives Ladros's Million Laser, which devastated the forest and the fighters. After Mars betrays Ladros and protects Dominante and Fanzell, Mariella sneaks up behind Ladros and attacks him with ice blades. He absorbs the magic and prepares to blast her, but Mars knocks him away. Mars then creates a crystal platform to carry the defectors through the air and uses Phoenix Feathers Robe to heal them. Mariella and Dominante later split off, while Fanzell and Mars lure Ladros away to the other side of the forest.[12]

After all of the fighting is over and the Witch Queen has healed everyone, Fana decides to live with Mariella, Fanzell, and Dominante. The group then returns to their house.[13] 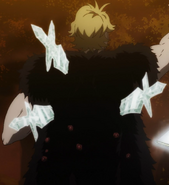