Marie Adlai 「マリー・アドレイ Marī Adorei」[1] is the younger sister of Gauche Adlai[2] and lives in Nairn under the care of Theresa Rapual.[3]

She is the human host for the elf Eclat.[4]

Marie is a young girl with short blonde hair that is swept to the left side and purple eyes. She wears a purple dress.

While possessed by Eclat, tattoos appear on her forehead and left cheek and her ears become pointed.[5] 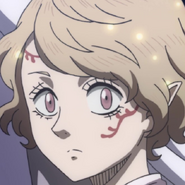 Like most small children her age, she has an interest in cute clothes and stuffed animals. She also seems to enjoy playing with other children and quickly takes interests in others. Although a noblewoman, not having been raised as a noble, her life and upbringing is no different from that of a commoner.

Marie was born as the second child of House Adlai. Sometime after her birth, her parents died in an "accident", and another noble inherits their wealth and casts out her and her older brother. Gauche does everything to protect her, killing and stealing as needed.[6] One night while they are traveling, Marie spots three men attempting to rob a young woman and asks her brother to stop them. He obliges and knocks the men unconscious.[7]

Later, after Gauche attacks a noble's house and is imprisoned, Marie is sent to an orphanage in Nairn.

Years later, Gauche is watching Marie through a mirror while she sleeps when Asta arrives at the Black Bull's headquarters.[2][8]

On her tenth birthday, she is playing with Asta, Luca, and Marco Scarlet when Gauche arrives with bags of toys. Jealous, Gauche stomps on Asta, and Marie tells him to stop and declares that Asta will be her husband, which shatters Gauche and angers him more. Sister Theresa then arrives to collect Marie, and after Theresa and Gauche trade insults, Marie leaves with her.[9]

Later that night, snow covers the town and enchants many of the children, including Marie, and they wander out of the town.[10] When they reach the caves, Neige happily greets them, but Marie, who is freed from the spell's control, tells him that friends do not control each other like puppets. Losing his temper, Neige hits her, but Baro stops him and checks the children's mana, noticing that Marie has the most.[11]

After several of the children are drained of their mana, Marie is selected and Neige starts dragging her to the machine. Gauche then arrives and, seeing his sister's injured cheek, fires a light beam at Neige.[12] After Asta and Theresa arrive, the Sister gathers the children together and heals them.[13] As Gauche kicks the defeated Neige, Marie pleads for him to stop but he refuses.[14]

Gauche grabs Marie and flies away after Sally arrives and turns Baro into a monster.[15] Marie demands that they go back, but Gauche refuses because he would not be able to protect her.[16] She punches him and tells him that she hates when he is like this, and that she likes him for being a Magic Knight who protects others. They encounter Marco at the cave entrance, and Gauche leaves Marie in his care.[17]

Finral Roulacase transports the injured and the children back to Nairn, where Marie stands next to her brother and watches as healers take care of Theresa.[18] After Theresa passes her remaining mana to Gauche, Marie offers hers, too.[19]

After the battle, Gauche visits Theresa, who is still recovering, and Marie has to tell them to stop fighting. She then cheers as Asta arrives, which angers her brother.[20] After Rebecca kisses Asta, Marie wants to kiss him as well, so Gauche tries to kill the boy.[21]

When the Black Bulls travel to Raque, Gauche shows his sister the beach. She mentions wanting to play with Asta, which causes Gauche to attack the boy.[22]

Several weeks later, Marie is playing with Marco when she begins to glow brightly.[23] She is possessed by the elf Eclat and leaves with her brother, who is possessed by Drowa.[24]

After Asta exorcises the spirit, Marie cries and is thankful that no one was hurt. Gauche initially chastises Asta, Gordon Agrippa, Grey, and Henry Legolant for risking themselves for him and Marie, much to her shock, but then he thanks them. A light flashes overhead as the rest of the Black Bulls drop down from above and bury everyone in a pile of cotton. Charmy Pappitson then offers Marie food, which she enjoys.[25] Marie joins the Magic Knights while they regroup in Clover Castle's courtyard and recover their magic power.[26] While some Magic Knights head off into the Shadow Palace, Marie stays close to Gauche who remains behind to help fight off possessed Golden Dawns.[27]

After the remaining elves are exorcised, Marie returns to Nairn.[28] A few days later, she is brought to the Magic Parliament Courthouse. When Asta is unable to prove the existence of another devil, Damnatio Kira judges Marie for the actions of Eclat and sentences her to death. Asta saves her with his black form.[29] The Black Bulls interrupt the trial, and Gauche shoots at Asta for touching Marie, who begs her brother to stop.[30] The trial ends when Nozel and Fuegoleon bring a mission from Julius: the Black Bulls will be exiled while the squad investigates devils and monitor Asta and Secre Swallowtail.[31]

Six months later, a demon attacks the Clover Kingdom, and Marie and Sister Theresa watch as Asta protects the kingdom.[32] She cheers after Asta cuts apart the demon.[33] 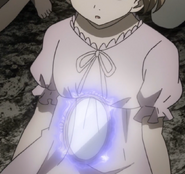 Marie loves her older brother. She can also be stubborn as Gauche and reason with him that he should protect the people as a Magic Knight that she looks up to.

Marie has a crush on Asta as he risked his life to save her from terrorists during the attack of the Clover Kingdom. She declares that he will be her husband when her brother came back much to his dismay,[40] and tries to kiss him after Rebecca does.[21]