Episode 121
The Magic Parliament 「魔法議会 Mahōgikai」 is a collective of royals and nobles who act as the Clover Kingdom's legislature and judiciary. The current chairman is Damnatio Kira.[1]

As the judicial branch of the Clover Kingdom government, the Magic Parliament oversees criminal trials.

Since judgments are based on the nobles' opinions, the Magic Parliament is not an impartial body as the nobles are prejudiced and discriminatory against the lower classes[2] and former nobles and are easily swayed by the opinions of royals.[3][4]

Executions are carried out by firing squad.[5]

The Magic Parliament Courthouse 「魔法議会裁判所 Mahōgikai Saibansho」 is a round tower that stands several stories tall.[6] The main entrance leads to a raised platform where criminals stand awaiting judgment. To the left of the main entrance, a raised walkway extends from a smaller door and is where additional witnesses or criminals can be brought out. Opposite of the main entrance is a large staircase that leads up to a large door, from which the chairman enters. The rest of the Magic Parliament sit in three tiers of gallery seating.[7]

The Black Bulls destroy the main entrance when they barge into Asta and Secre's Trial.[8] 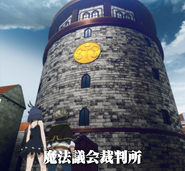