As an elf, Lufulu is a short boy with shaggy white hair and blue eyes.[3]

While possessing Luck Voltia, two tattoos appear under Luck's eyes and his ears become pointed.[5] His skin darkens when Lufulu is corrupted by his own hatred.[6] 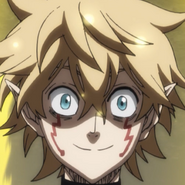 Like Luck Voltia, Lufulu enjoys fighting.[7] He also appears to share Luck's habit of constantly smiling even when he is enraged.

Lufulu despises humans for their betrayal and looks down on them as inferior and has shown to have deep resentment and hatred for them, especially towards the human royalty.[8][9] These magnified negative feelings are strong enough to corrupt him into a dark elf. However, upon seeing Luck's pleasant and happy memories with his squad mates and being freed from the effects of the Reincarnation Magic, Lufulu states that he would have wanted to be friends with humans like the Black Bulls.[10]

Lufulu and Charla are carrying food when Rhya passes them on his way to a meal with Licht.[2] The next day, after Licht and Tetia's wedding, the villagers are massacred by humans.[11][12]

Later, Ado brings Lufulu and the other elves in the dungeon into the central room. The dungeon is then steered toward the Clover Kingdom and their revived brethren.[16] While passing over the Common Realm, Lufulu decides to attack one of the towns,[17] which draws the attention of Magna Swing and Vanessa Enoteca. When the Black Bulls arrive, Lufulu blitzes them but Vanessa's cat, Rouge, forces him to miss. During his fight with Magna, Lufulu is tricked into catching hold of Magna, who detonates multiple fireballs. As they fall, Lufulu is slammed into the ground by a large fireball and then is restrained with Flame Rope Solid Binding Formation. Magna declares that the elf has no way of winning, but Lufulu calls down a bolt of lightning and frees himself.[18]

Lufulu demands to hear Magna's plan, and when the Black Bull tries to attack, the elf disappears with heightened speed, ricocheting around the town. He stabs his hand through Magna's stomach, but Vanessa undoes that fate. Realizing that she cannot harm him and that Rouge requires a lot of magic power, Lufulu keeps up his attacks until the two Black Bulls are exhausted. While holding Magna by the throat, Lufulu mocks their attempts to break the Reincarnation Magic with human bonds, but Magna points out that Luck is crying. Lufulu tries to kill Magna, but Vanessa pulls Asta to the battlefield. The boy frees Magna and confronts Lufulu.[19]

Lufulu attacks the boy and is surprised when Asta's black form is able to track Lufulu's movements. Unable to outrun Asta, Lufulu distracts him with Thunderclap Crumbling Orbs and lands a kick to his abdomen.[20] Magna and Vanessa try to provide cover for Asta, but Lufulu still locates the boy and kicks him again. When Manga tries to hide Asta in a series of explosions, Lufulu spreads out his mana and senses Asta's location by where his mana is erased. Lufulu attacks Asta but his timing is thrown off by Vanessa's thread holding Asta back. Magna severs the thread and Asta hits Lufulu with his sword, smashing the elf into the ground.[21]

Magna and Vanessa pin Lufulu to the ground and Asta tries to exorcise him. Lufulu refuses to lose and strikes the group with a lightning bolt.[22] Lufulu then activates his self-destructive magic, planning to destroy all of them, including himself and his vessel. As the elf's body corrupts, turning into a dark elf,[23] Asta apologizes for the past humans' transgressions and succeeds in purifying the elf's hatred. Reminded of the first Magic Emperor, Lufulu wishes he could have been friends with humans. The reincarnation spell is broken and Luck is freed from Lufulu's control.[24] 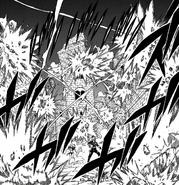