Lucius Zogratis 「ルシウス・ゾグラティス Rushiusu Zoguratisu」[1] is the eldest of the Zogratis siblings and a devil host.[2]

Lucius is a tall man with short, messy, dark-colored hair. One of his notable features is a dark-colored sun-like mark on the right side of his forehead.

While growing up in the Spade Kingdom, Lucius is in a wheelchair and wears a shawl over a dark-colored, long-sleeved shirt.

Due to Zenon's great potential, Lucius offers to turn his younger brother into a devil host as well, but Zenon turns down the offer. Years later, after the death of his friend, Zenon returns to his brother, wishing to become a devil host.[3] Lucius then explains his plan to use their devils' powers to remake humanity with undying bodies in order to create peace.[4]

At some point, Lucius travels to the Clover Kingdom and hides himself as Julius Novachrono.

Several years later, after Lucifero's defeat, Damnatio Kira confronts Julius about discrepancies with Astaroth and Time Magic, at which point Lucius drops his disguise and incapacitates Damnatio. Adrammelech then arrives with Lucifero's heart.[5] 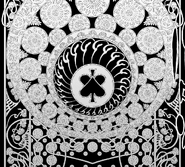