Lucifero 「ルチフェロ Ruchifero」 is a highest-ranking devil connected to the Tree of Qliphoth and one of the three rulers of the underworld,[4] residing on the lowest level.[5] He has contracted with Dante Zogratis, a member of the Spade Kingdom's Dark Triad,[6] as well as with Moris Libardirt.[7]

Lucifero is a tall figure with four bat-like wings, four curved upward-pointing horns coming from the temples and the sides of his head, long light-colored hair, pointed teeth, and pointed ears. His eyes have dark-colored sclera, red-colored irises, and vertical slit pupils. His hands are thin and boney with dark-colored fingernails. His lower body is covered in a long, dark-colored skirt.

Due to the manifestation being incomplete, Lucifero's skin is twisted and heavily covered in wrinkles.[8]

In order to manifest through the second gate, Lucifero combines countless devils into a tentacled blob. One tentacle has the devil's four horns and a mouth with black pointed teeth.[9]

While using all of the power of his half-manifestation, spikes form on his shoulders and elbows, most of his skin smooths out, his horns become thicker, and the digits on his wings disappear. His skirt shrinks to cover only his waist and upper thighs. A third eye appears on his forehead but it has no iris or pupil.[10] 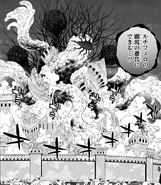 Like most devils, Lucifero is arrogant and cruel, looking down on those he considers weaker than himself, like lower-ranked devils and humans. As such, he holds little regard for their feelings, using and killing them as he sees fit[11][12] and forcing them to prostrate themselves before him.[13] He also greatly detests when they interfere with his plans.[11][14]

After discovering that Liebe has reached the living world, Lucifero attempts to take over the low-ranked devil's body. Liebe's foster mother, Richita, tries to stop Lucifero, so the devil plunges Liebe's left arm through her. However, she refuses to give up and succeeds in forcing Lucifero out. He laughs and promises to return one day.[11]

During his fight with Asta, Dante Zogratis asks Lucifero about Asta's devil, but Lucifero claims to not know the devil and considers him to be a low-ranking devil due to his spell-erasing power.[6]

After the Dark Triad to the Spade Kingdom, Moris Libardirt also becomes a host for Lucifero and uses his devil-boosted Modification Magic to copy over Lolopechka's inherited knowledge, which allows him to devise a method of accelerating the Qliphoth Advent Ritual.[15]

A few days later, the first gate to the underworld opens, and Dante is able to access 100% of Lucifero's power that was granted to him.[16] Moris alters the Tree of Qliphoth, enabling it to continue without the Dark Triad, who have all been defeated. As the same time, Lucifero has prepared a method to escape after the second gate opens.[17]

After the Black Bulls defeat Moris and knock him unconscious, Lucifero forces Moris's body to expel the last of his magic and life in order to accelerate the ritual, opening the second gate. As the horde of devils pour out, Lucifero seizes control of them and pulls them into a large mass, along with devils from the first level and the coffins holding Yami Sukehiro and William Vangeance. Lucifero then shapes the mass into a giant creature into which he can manifest. His new body bursts out of the castle and increases the gravity in the surrounding area. However, the Black Bulls take the pieces of the castle and some of the devil's magic power, and combine them into the base, creating the Ultra Giant Bull, which punches Lucifero.[18] He recovers and increases the gravity around the base, causing it to crumble. One of his tentacles threatens to crush the Resistance members at the front gate, but Mereoleona Vermillion and Fuegoleon Vermillion combine their Fire Magic and incinerate the tentacle. The Ultra Giant Bull punches with Mana Corkscrew and then fires numerous magic beams, tearing holes through the monster. However, the devil regenerates and increases gravity again, crushing the base.[19]

Lucifero's monster form continues to grow, but Asta releases a flying slash that slices the monster in two, as well as destroying the coffins holding Yami and William.[20] As half of the monster's body falls toward the castle town, Yuno Grinberryall shoots an arrow that destroys enough of it to save the citizens and Magic Knights below.[21] The leftover flesh then swirls together and compresses into a sphere, from which Lucifero manifests in a half-complete form. He forces all of the humans to lie face down in the ground. When he sees Asta flying toward the capital, he recognizes Asta as the one who stopped his manifestation, and suddenly appears next to the Black Bull.[22] When Liebe angrily demands to know if Lucifero recognizes him, Lucifero claims not to know Liebe and uses gravity to slam Asta into the ground. After Asta and Liebe Unite, Lucifero warps space to avoid their first attack, but when they track down Lucifero, he catches the Demon-Slayer Sword in his hand. He drags a finger along the edge, drawing a drop of blood, which infuriates him. He then punches Asta, sending him crashing next to the ruins of the Black Bull base. As Lucifero approaches where Asta landed, the captains rally around Asta and prepare to confront the devil.[23]

Lucifero is unfazed and unharmed by the captains' attacks and easily knocks them all down, demanding that they despair and prostrate themselves before him. They refuse, and Asta attacks the devil from behind.[24] Though Lucifero ducks his head out of the way, the sword slices off the tip of one of his horns. Infuriated at the marring of his body, Lucifero grabs Asta by the head, slams him into the ground, and proceeds to stomp on him, severely injuring Asta and Liebe and knocking them out of Unite. However, Dorothy saves Asta before he is killed, while Mereoleona distracts Lucifero. The captains then work together to keep Lucifero away from Asta, but the devil fights his way through them and throws Fuegoleon Vermillion into Rill Boismortier, destroying Twilight of Valhalla. Lucifero leaps over to Asta and slams his foot down, creating a small crater; however, Yuno Grinberryall has teleported Asta over to him and Mimosa Vermillion.[25]

Yuno and Mereoleona, whom Lucifero is surprised to see still moving and growing in power, team up to fight the devil.[26] Lucifero grows tired of fighting them and orders Adrammelech to take over while he goes after Asta and Liebe, but the other devil refuses, which irritates the King of Devils. Mereoleona mocks Lucifero while preparing a punch, but before her fist can connect, part of her arm disappears, so Lucifero attempts to punch her and scatter her body, but Yuno teleports her away. The devil then punches Yuno, who holds up Spirit of Zephyr to block the direct hit but is still sent crashing into the ground. Lucifero looks around and notices that Asta and Liebe have disappeared. Nacht Faust in Unite Mode: Canis × Equus emerges from a large pool of shadow beneath Lucifero and summons two large dog heads and multiple chains to restrain the devil. Asta is then lifted into the air behind Lucifero and swings the Demon-Slasher Katana at the devil's head. However, Lucifero disperses Nacht's shadow creations and turns to attack Asta, so Nacht leaps into the air and brings his shields in front of him. Lucifero shatters the shields but his follow up attack is blocked by Yami's Mistilteinn Blade.[27]

Recognizing Yami as the Dark Magic user, Lucifero sends Yami and Nacht flying away and attacks Asta again. Zora Ideale and Secre Swallowtail, with Rouge's help, jump in front of this punch and combine their magic to reflect and trap the devil for a brief time.[28] Zora channels the magic power into his fist, doubling the power, and then punches Lucifero, who cancels it out with a punch of his own, which breaks the bones in Zora's arm. Yami and Nacht then reappear in front of the devil and combine their magic to create Kids' Playground. Shadow clones of Yami and Nacht swarm Lucifero, but the devil easily destroys them. While the devil is preoccupied, the real Yami leaps out of a shadow and swings his sword, hitting Lucifero with Dark Cloaked Deep Black Blade. Lucifero is knocked down to the ground and a small injury appears on his arm. As the wound fades, Lucifero acknowledges that humans do have the potential to harm him, so he decides to use all of the power of his half-manifestation to kill them and humanity.

When Lucifero's transformation completes, Asta and Yuno join Yami and Nacht in fighting the King of Devils.[29] Lucifero warps the space around him, tearing apart the Shadow Magic. When Asta attempts another Infinite Slash Equinox, Lucifero dodges the slash and, appearing next to Asta, prepares to punch him, but Yami leaps out of a shadow and interrupts the attack. The devil is unharmed by Yami's sword and crushes Yami's left arm, so Yuno teleports Yami out of harm's way. Lucifero chases after them and manages to crush Nacht's arm. While Asta is negating the Gravity Magic, Lucifero kicks Asta's knee, breaking it. Yuno then appears behind him and swings Spirit of Boreas at the devil's head. Although the devil shatters the halberd, Yuno places stars on either side of Lucifero, who prepares to kill whoever might appear.[30] Instead, Yuno's star shines brightly, casting a shadow behind Lucifero. Yami and Nacht attack from the shadow, but Lucifero transforms his upper pair of wings into arms and stabs the hands through their torsos. Declaring that the fight is over, Lucifero then swings his fist at Asta and Liebe.[31]

After Asta and Liebe achieve a truer form of Unite, they block the punch with their sword. Confused over the change, Lucifero punches them again, but it does nothing. When they grab his wrist, Lucifero notes that their touch negates magic. Refusing to give up, he barrages them with punches, but they are unaffected, then leap above Lucifero, and sever the second pair of Lucifero's arms, freeing Yami and Nacht and also trimming the devil's hair and the tips of his other horns. Asta and Liebe then kick Lucifero in the head, knocking him back.[32] Lucifero launches rocks that he pulled from the ground and manages to slam one into Asta and Liebe's side. While they are stunned, Lucifero leaps forward and punches them in the abdomen, but it does nothing. Lucifero recognizes the look on their face as resembling Richita's and calls her worthless. Asta and Liebe then cut him into several pieces. As Unite ends, they stand over the King of Devils and tell him to grovel.[33]

Infuriated, Lucifero levitates his remaining body and forces them to prostrate themselves. Before he can crush them though, Yami and Nacht neutralize the gravity and emerge from the shadows. Lucifero mocks their stubbornness and points out that Asta can no longer attack, but Asta draws the Demon-Slayer Sword and stands back up with Nacht's help. Shaken, Lucifero flies away in retreat and threatens to return with his full power. However, Yuno teleports the devil back to in front of Asta, who brings the sword down on the Lucifero. The Anti Magic weapon smashes through one of the horns and slams him into the ground, knocking him unconscious.[34] Afterwards, Adrammelech flies over and pulls out Lucifero's heart, which causes his body to disintegrate. Adrammelech then flies away, carrying the heart in its hand.[35] 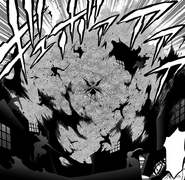